Let’s take a trip back to 1997, shall we? Though not that long ago, the world was most certainly a different place. The internet existed, but every television commercial didn’t advertise some use for it. We had Bill Clinton in the White House who had not yet been impeached and we were all introduced to a new format called “DVD” that would let us watch a movie in digital picture and sound. Ah, those were the days! Growing up in Arkansas, I have had my fair share of Bill Clinton and, looking back, he really wasn’t that bad of a president. Foreign countries respected us and it was a night and day difference from the outright mockery that George W. Bush made of our country. But I won’t turn this into a political discussion. Let’s look at the facts: Wolfgang Petersen, Harrison Ford as the President of the United States who fights the bad guys. Need I say more?

President James Marshall (Harrison Ford) is back en route to the United States after delivering a speech on his “no tolerance” policy against terrorism. It just so happens that while on “Air Force One”, the plane is hijacked by, you guessed it, terrorists. Led by Ivan Korshunov (Gary Oldman) they know their job well and are doing everything they can to get to the leader of the free world. The Vice-President (Glenn Close) just so happens to be on the ground and we see the interaction between them as they try to make it out of this situation. What really makes the movie work is Ford. Ford was a staple of movies in the 90’s and his portrayal of the president as an ass-kicking tough guy gave audiences a reason to cheer. With the entire movie taking place aboard the plane, there’s little room for error and we wonder if the plane will ever make it to land?

Air Force One, for a time, held the record for largest opening weekend for an “R” rated movie. I’m sure that record has been erased by now but still this film gave audiences what they wanted and what the film promised. Ford isn’t quite the leading man he was after this as his next film What Lies Beneath was a hit. While the plot is a tad bit predictable, the film does deliver on all accounts. Gary Oldman is perfect as the emotionless Russian terrorist and though he’s turned to some more “family friendly” roles (with parts in the Harry Potter and Christopher Nolan’s Batman films), and now an Academy Award Winning actor. The ensemble cast helps round out what has gone down as a great action movie and something that’s taut and tense even several years later.

I remember seeing this film in theaters and, of course, had no idea that I’d be writing about it on a 4K disc some two decades later. Here I am, however.  I know that I’ve said it before, but I’ll continue to say it because it’s true. Sony puts out the best-looking 4K discs of any studio. Air Force One is one of their catalog titles that I didn’t expect to see, but when putting in the disc it was immediately evident that this was going to be a good-looking picture (in every sense of the word). Contrast is strong and well-balanced, detail has been improved over the previously-released Blu-ray and a fine layer of grain only adds to the overall appeal. The HDR gives some of the interior shots (the majority of the movie takes place inside a plane, naturally) a nice uptick in color as well. This is a magnificent effort by Sony and is worth the price of admission.

The Dolby TrueHD sound mix has been replaced by a new Dolby Atmos mix. I recall a scene in which a machine gun is fired by Harrison Ford’s character. The shells landing on the floor made such a sound that it reverberated all around me. Finally, I now have that same sense of sound. Of course there are also explosions, jet planes and the like to keep all of the speakers occupied. This Atmos mix pumps up the volume a bit, but it’s the fine nuances that really give the mix a life of its own. Vocals are sharp and crisp, Ford’s commanding voice takes front and center while Oldman’s Russian accent sounds positively delightful. This new mix is the icing on the cake.

Wouldn’t it be great if we had a President that stood up and took charge instead of insulting people on social media? That’s why we like to escape to the movies. 1997’s Air Force One is and most likely will remain to be one of my favorite films. Sony’s new 4K disc ups the ante with reference-quality audio and video. It’s a shame that there aren’t any more supplemental materials added, but for those that care about the tech specs, it’s all here. 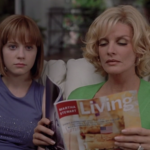 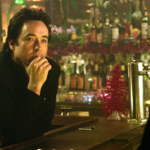