Perfection doesn’t exist. Not in any way, shape or form.  I don’t care what you call it: Utopia, Shangri La, Paradise or Elysium – it’ll never happen because we, as humans, won’t allow it.  There will always be something, anything that will invariably mess things up.  It’s called the human component and it’s just the way we are.  More on that later, though.  I’m now switching gears back to 2009 when I saw a little movie called District 9 that took the world by storm. It was an alien movie and one that was a bit avant grade – you see, the aliens weren’t the dominant species and pretty much got their asses kicked by the humans. Yeah!  Take that!  It was made by a South African filmmaker named Neill Blomkamp and it went onto garner two Oscar nominations, one for Best Picture (in the first year that the Academy opened up the field to 10 films). With this sophomore effort, Blomkamp now wheels in Matt Damon and Jodie Foster (and Sharlto Copley, who helped make District 9 a success) for perhaps the most politically-charged film of the year. It’s all there folks, just read between the lines.

Max (Matt Damon) grew up in a dilapidated Earth. It’s over-populated, disease-ridden and impoverished.  His only outlet was his friend Frey (Alice Braga) and Max had promised that someday he’d take them to the palace in the sky called Elysium.  You see, the rich and prosperous escaped Earth and have established a new society among the stars, thereby leaving those on Earth to fight it out amongst themselves.  As time has shown, Max had run ins with the law and now works at a plant that assembles police droids, the same ones that harass him on a daily basis. Frey is a nurse, yet her own daughter is dying of Leukemia.  After Max is exposed to a lethal dosage of radiation, he’s given only days to live. Sensing that his only hope of survival is to get to Elysium, where their medical technology can save him, he enlists the help of an old friend – Spider (Wagner Moura).  They hatch a plan to steal information from John Carlyle (William Fitchner) and then use that as a key to Elysium. The odds of survival are low, but Max has nothing to lose and gives it a shot. Of course Secretary of Defense, Delacourt (Jodie Foster) can’t allow this to happen and dispatches freelance psycho Kruger (Sharlto Copley) to eliminate Max.

I recently watched a movie with Jim Sturgess and Kirsten Dunst called Upside Down. In it, the world was literally divided in half with one side looking down (or up, depending on your point of view) at the other.  As with Elysium, there was a class system and one side was prosperous, while the other were less fortunate. That’s very evident in this movie as well and it’s one of several issues that the film is trying to tackle.  Certainly this movie is big budget and with stars like Matt Damon and Jodie Foster in the cast, it’s clear that Blomkamp made an impression with studio execs.  Damon does a great job and seeing a bulked up and bald Matt Damon is something we’re not accustomed to. Jodie Foster does her best with her role, but it’s really Damon’s movie.  Sharlto Copley plays the psycho quite well and let’s just say that there’s one scene that’s pretty hard to forget (don’t play with grenades, kids).  On the whole, I felt Elysium could have delivered a bit more, but I was intrigued enough that I wasn’t totally let down, either.  Regardless of your views on society and the pursuit of perfection, it’ll always be just out of reach.

I remember, when initially reviewing the Blu-ray, that the words “Mastered in 4K” were there. It gave me a nice, warm feeling. That’s been quite some time ago and now we’ve got a disc that actually is 4K and not just “mastered” in it. And, in a word it’s pretty much the epitome of perfection. The 2.40:1 HEVC 4K image is so rock solid and razor sharp that I was hard-pressed to try and find something, anything that would deter from its visual superiority.  Black levels are solid and work well off the contrast. I noticed no blocking, no artifacting or banding.  Flesh tones are a bit inconsistent, but it’s not a fault of the transfer. Detail is amazing, we get to see all the bits and pieces of the year 2154 as if we were right there.

As with the video presentation, the new Dolby Atmos track is something to behold.  Dialogue and vocals are crisp and clear, and though I was trying to piece together what Jodie Foster’s accent actually was, I let it go.  Surrounds are ever present, adding depth and dimension to pretty much every action scene. We’ve got a bevy of scenes complete with shuttle lift offs, gun fights, explosions and everything in between.  The LFE are pretty active as well, which makes way for a very robust mix that really never lets go.  Science Fiction movies are, by and large, very audio heavy and Elysium certain packs a punch.

This two-disc set features all of the supplements contained on the previously-released Blu-ray along with a few new ones added to the 4K disc. How neat!

While not quite as incisive as its predecessor, District 9, Elysium was a bit more enjoyable for me to watch. Damon is essentially doing his Jason Bourne routine, but it fits the part perfectly here. Sony’s disc has upgraded audio and video as well as several new supplements on the 4K disc. For fans, this one is a win all around. 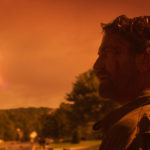 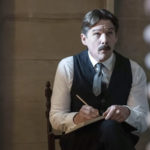