Thirty some odd years ago I remember watching the G.I. Joe cartoon and reading the comics.  I never had any real ambitions of being a soldier, but watching this elite group of special forces fight the forces of evil was a nice thing to see (albeit in animated form). Three decades later Hollywood has fulfilled every Generation X’ers dream and has made a full-length feature film. Gasp! Shock!  In truth, this is actually the sequel to the 2009 film G.I. Joe: The Rise of Cobra which, I thought, I’d seen.  But after a quick check of the database I see no review for it and, try as I might, I can’t seem to remember a single scene from that movie.  Have I seen it?  I’m pretty sure because I wanted to see how they handled the character of Snake Eyes.  Well, I have just finished G.I. Joe: Retaliation and I do remember that.  So I’d better put this in written form lest I forget about it in a few years.

Seeing as how I can’t seem to recall the first installment, I’ll just dive in head first here.  We meet the team, led by Captain Duke (Channing Tatum), with his team of Roadblock (Dwayne “The Rock” Johnson), Lady Jaye (Adrianne Palicki) and Snake Eyes (Ray Park).  All is well until the Joes are attacked by the forces of Cobra, sent by none other than the President of the United States (Jonathan Pryce), but as we all know is a Cobra agent in disguise.  The Joes, though dead, were framed for the murder of the Pakistani President as well as theft of some nuclear weapons.  This allows Cobra to become the “go to” team for the country unbeknownst to the rest of us.  Of course, a small group of Joes survived and seek out the help of Gen. Joe Colton (Bruce Willis).  This, of course, begs the question – can this small force of soldiers literally save the country or will the forces of evil take over?

Well what do you think?  Look, G.I. Joe isn’t meant to be a movie that will make your synapses fire and have you rub your chin in deep thought.  We all love to watch “The Rock” in action and we’re balanced with an equal amount of female beauty with Adrianne Palicki.  Oh and there are guns and explosions and sword rights.  You know, the kind of stuff that guys like.  And hey, let’s go ahead and add Bruce Willis to the cast, because he’s not in every other movie out there, right?  Right.  I’m being a bit harsh, but this movie delivers on everything that it says it will.  It’s mindless action and entertainment, a fairly decent storyline and it does unearth some rather obscure characters from the G.I. Joe universe.  If you’re looking to be intellectually challenged, then this is probably not the film for you.  But if you just want to sit back and be entertained, then you could do a lot worse.  Look for Part 3 in a few years, because…that’s what Hollywood does.

Paramount’s 2.40:1 HEVC 4K image delivers on what I expected with a crystal clear transfer, astonishing detail and colors that leap off the screen.  How good is this image?  I recall seeing a bead of sweat drip down Adrianne Palicki’s face (yes, I was actually looking at her face, don’t ask me why).  The individual hairs of the actors (minus Willis, of course) stand out, the detail in “The Rock’s” tattoos – all look stunning.  Contrast and black levels work well with one another and make for a jaw dropping transfer.  I found that the image looked a bit too bright in places, though nothing totally distracting. One would assume that a relatively new film would look “that much better” on 4K and while it does for the most part, there are a few trouble spots.

While it might have been nice to have a Dolby Atmos or DTS: X mix on the disc, no need to fix what’s not broken. That said, the Dolby TrueHD track is included on the 4K disc and, obviously, the Blu-ray as well. I really like the fact that Paramount is supporting Dolby TrueHD with a number of their titles. I don’t know if there’s some contract between Paramount and Dolby, but since DTS soundtracks are on most every other title, I tend to go in favor of those in the minority.  Having said that, this mix is downright amazing.  The surrounds have so many little nuances going on that my head was constantly swaying around, trying to identify the sounds. I’m talking of the little fireflies that blow up, bullets that whiz by and little chirps in the background. Of course the LFE are heavily involved as well giving the mix a very robust “oomph” factor as well.  On a technical level, this disc delivers.

No new supplements have been added and none are present on the 4K disc. The second disc (Blu-ray) contains all of the supplements and is identical to the previously-existing Blu-ray disc.

The G.I. Joe films are, as expected, a guilty pleasure. I grew up with the cartoons and collected some of the action figures and it’s interesting to see how they were brought to life on the big screen. It’s a bit disappointing that no new supplements have been added, but if you want to build a G.I. Joe 4K library, your collection just doubled. 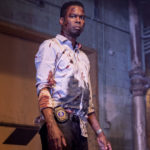 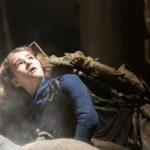