I have to imagine that it’s a hard job to try and predict the success of failure of feature-length films on any given year. For every $100 million dollar “flop”, there’s a movie made for one-tenth that that grosses 400% of its budget. That’s a lot of math for one sentence, suffice it to say it’s not a job that I (or anyone) would want. That and the Summer Movie season is Hollywood at its over-indulgent self with each weekend a new film trying to claim that coveted #1 box office spot. With the release of Maleficent, it was a return to the screen for Angelina Jolie who hadn’t been seen since 2011’s Kung Fu Panda 2. Sure we know all about her personal life, but there are those of us that still like to see her on screen. Maleficent, of course, is perhaps considered the most cruel and ruthless of all of the classic Disney villains, so a film that’s essentially all about her – would it work?

If you’ve seen Sleeping Beauty, then you’ll be familiar with the general plot of the movie. It’s not a literal live-action remake of the classic tale, but instead focuses a bit more on the title character (as expected). Maleficent (Isobelle Molloy and later Angelina Jolie) is a fairy growing up in a peaceful forest kingdom. However an invading army threatens the land, Maleficent befriends one of its warriors, Stefan (Michael Higgins and later Sharlto Copley). As time passes, Stefan’s passion for the throne deepens. He uses his friendship with Maleficent to betray her and thus ascends to position of King. When Maleficent learns that the King has a daughter, Aurora (Elle Fanning), she places a curse that will kill her on her sixteenth birthday. Aurora is sent to live in the forest under the care and guidance of three fairies to try and thwart this curse. However as Maleficent gets to know Aurora, her feelings for her change and she (Maleficent) realizes that the child might be the one key to peace. But with the curse unable to be lifted, will Aurora suffer the fate of the curse or will true love’s kiss save her?

Having just watched Sleeping Beauty not too long ago, the plot was still fresh in my mind. As I mentioned, Maleficent doesn’t try and re-invent the wheel, but tries to give us some insight into why she is how she was. And I think they do a very good job of giving us that backstory. Even after a three year absence from the screen, Jolie manages to show us why she’s such an accomplished actress as she owns the role of Maleficent from beginning to end. I’d made a remark about the financial aspect of the film and I’m sure the executives at Disney are pleased as the film has gone onto gross nearly 3/4 of a billion dollars worldwide. This is the film alone and not all of the marketing jazz associated with it. Granted the movie had an estimated budget of $180 million, so I’m sure hopes were high, but this one actually delivered. I have to admit that I found the film’s PG rating a bit odd as there are some scenes that might scare younger children. Clearly this didn’t affect the gross, but parents might want to rethink this one. At any rate, I found Maleficent to be pure entertainment – recommended.

Maleficent simply sparkles from beginning to end. Everything about this film looks amazing, from the trails of fairy dust to the green smoke that emerges from Maleficent’s hands when she casts a spell – stunning. I found no sign of error in any one scene. Jolie’s angled cheekbones, the green eyes and even the crosshatch pattern on her headset all look amazing. There are some darker scenes in the film and black levels and contrast work in perfect concert with one another. The film is the epitome of a perfect live-action transfer. I did a side by side comparison and the 4K version does add more depth, dimension and detail. That and the HDR do give a little more contrast to some of the darker scenes (of which there are many). It’s a great-looking picture.

A new Dolby Atmos track has been added as well, giving rise to a more atmospheric soundsttage. Vocals are rich, full and deep, surround effects are plentiful and robust and the LFE have more than their fair share of screen time.  I also have to note that James Newton Howard’s score is second to none and really brought the film to a higher level.  The entire gamut of sound is on display (so to speak) here from the battle scenes that engage every speaker to the little high-pitched sounds that heighten the mood. Direction effects are used with great effectiveness as well. Add it all up and you’ve got an amazing-sounding movie that’s sure to delight.

Unfortunately there are no new extras on this disc, but all of the Blu-ray extras are included on the Blu-ray disc.

We have this film to thank for Disney’s resurgence in the classic-animated-movie-turned-live action. Had this one flopped, I doubt we’d have seen later installments like The Jungle Book or Beauty and the Beast. But it didn’t. And thus Disney has enough money to make a live-action film out of anything they want. Isn’t that nice. 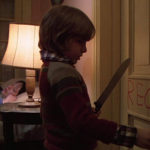 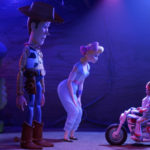