When I think of Mark Wahlberg’s movies, a few instantly come to mind. Of course, there’s Boogie Nights in which he portrayed a 70’s porn star (and still one of the riskiest moves by a young actor to date). There’s Fear, one of his early big-budget movies and other films like The Italian Job and The Departed. With Shooter, it’s a test to see if Wahlberg can carry a film on his own or if he always needs a supporting cast to make the movie a success. As it turns out, I think he pulls off the lead very well here and I was surprised at how much I really enjoyed Shooter. Jonathan Lemkin’s screenplay keeps the two hour movie moving at a brisk pace and what could have easily been a cliche-fest isn’t. And aside from the appearance of Danny Glover, the cast is composed of some actors that were unknowns at the time, but have since come into their own (Michael Peña and Kate Mara).

Wahlberg plays Bob Lee Swaggar, a former military sniper who has since gone into exile after his friend and partner is killed in the line of duty. Swaggar is looked up by the FBI and told his services are needed to help thwart an assassination attempt on the President. After some initial trepidation, he decides to accept the offer. As fate would have it, the attempt ends up killing an archbishop and Swaggar is framed. Having nowhere to run or hide, he manages to escape and enlist the help of Sarah (Kate Mara), his partner’s ex-girlfriend, who helps him along the way. The other factor is FBI agent Nick Memphis (Michael Pena) who’s not quite convinced that Swaggar was the assassin.

I said it at the time and I reiterate that now. Something about Shooter really spoke to me. I’m sure there are parts of it that are way too true and that the US Government has probably done some pretty nasty things under the guise of “Freedom”. However, I always love to root for the underdog. I compared a lot of this movie to The Fugitive in which Harrison Ford’s character had everything against him and he still managed to outwit the powers that be. Naturally some of the action is a little over the top, a few too many things seem to blow up near the end of the film but for a movie like this, it’s pretty much expected.

It’s been a while, a long while, since I sat down and viewed this film. First off, I was excited to see the 4K version and how a decade and a half has gone to improve the picture quality. As it turns out, it was worth the wait. Don’t get me wrong, like most other “new” 4K titles of catalog films, it’s never a night and day difference. But there are enough subtle nuances found that made me take notice. Increased detail, a broader color spectrum and a more even-feeling and looking picture on the whole. Flesh tones seem accurate and natural, wide shots are packed full of detail as well. It’s a welcome step up in picture quality and, truthfully, about the only reason to pick this disc up (unless you’re a fan of steel books). Whatever the case, it was a nice viewing.

The 4K disc gets the same treatment as the Blu-ray. It’s an opportunity missed to give this a nice-sounding Atmos mix, but the DTS HD Master Audio found on the Blu-ray wasn’t exactly bad to begin with. One thing I did notice was that dialogue was a bit muddy. That or Mark Wahlberg has taken to mumbling some of his lines. I don’t really think it’s a fault of the audio, but whatever it lacked, was certainly made up for in the battle scenes. Surrounds kick in at the appropriate times to add that extra “Oomph” and it works to great effect. This is a great-sounding movie.

As is the case with a lot of “new” 4K titles, there’s nothing added here. The supplements are the same from the DVD and Blu-ray from years’ past. They’re nice to have, for sure, but it’d have been nice to dig up some sort of retrospective featurette. Alas, it was not meant to be.

Shooter, to me, remains an engaging thriller even fifteen years after my initial viewing. Wahlberg has grown on me as an actor since then and I feel that he did a great job with this one. Paramount’s new 4K disc offers up a superior picture and a neat Steelbook case, but not much else. 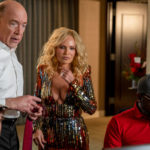 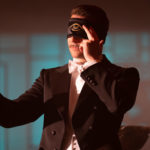