The year is 1987, and a rising star by the name of Kevin Costner is now headlining a movie Directed by Brian de Palma. Costner had been known for previous work, most notably Roger Donaldson’s No Way Out and a movie about an aging cyclist, American Flyers.  Now we have Costner headlining a movie starring Robert De Niro and Sean Connery. Could he handle it? In retrospect, I think the answer is “Yes”. Costner may not have chosen all the right roles for him, but one of his defining roles of his career so far has got to be his role as Eliot Ness in this movie. Based on a true story, Ness is a treasury agent assigned to bring down the illegal activities of the Mafia in Chicago. It seems Al Capone (Robert De Niro) is profiting by importing Canadian liquor into the Windy City, but no one can catch him in the act and no one can prove that it’s him. Of course, we all know that Al Capone was eventually caught in the end, but The Untouchables concentrates on the time of prohibition, how we dealt with it and how it eventually came to an end.

Eliot Ness (Kevin Costner), ever the idealist has been assigned to take care of Capone and all the problems that he and his hired henchmen seem to be causing. Capone, a reputed gangster and “businessman” has his own theories on how things should be run in Chicago. “I grew up in a rough neighborhood, and we always said that you could get further with a kind word and a gun, than with just a kind word”. It was clear that Capone was the closes thing to a celebrity, guarded by rows and rows of henchmen. So how was it that Ness was to ever pin anything on him? By sheer coincidence, Ness runs into local policeman, Jimmy Malone (Sean Connery). Malone, as he’s referred to in the movie, has street smarts, connections and knows how to bring down Capone. Only thing was that they needed a bit of “fresh meat” off the police force, as half of the force was on Capone’s payroll to begin with. This is where they meet and recruit George Stone (Andy Garcia). Stone is referred to as a “prodigy” by his commander, and is just the kind of idealistic, untarnished cop that can help Malone and Ness bring down Capone and his gang. The fourth member of The Untouchables is accountant, Oscar Wallace (Charles Martin Smith). Though kind of obscure looking, and about the last person you would think that could wield a gun, Wallace makes a great, if not comic addition to the team. And so it begins…the gang start raiding liquor houses based on suspicions, tips and every other trick in the book and begin to get noticed by Capone. It’s finally clear to Capone that a war has been waged on him and he’ll stop at nothing to get rid of Ness and his “Untouchables.”

It is important to note that this is a fictional account on what really happened, though the names are real. What Ness and the gang discover that the best way to get Capone may not be through guns. One thing Capone has a lot of. But you get his bookkeeper, and things start to fall into place. I can’t really say much more about The Untouchables that you haven’t seen or heard already. I personally think it’s Brian De Palma’s best movie, and he’s had a lot of great ones. The casting is top notch with DeNiro as Capone and Sean Connery as Malone (a role that finally won him an Academy Award as Best Supporting Actor). While the career of Charles Martin Smith has gone downhill, the other cast members have seemed to enjoy continued success.

It’s been a long while since we’ve seen any version of this film on disc. It was one of Paramount’s early titles on the Blu-ray format, but as we all know – technology has improved a lot since the infancy of those days. This new 4K version breathes fresh life into the film which looked dull and dated on both Blu-ray and DVD. The 2.35:1 HEVC 4K image still has a fine layer of grain, but thanks to enhanced colors, improved definition and HDR it’s never looked better. The film takes place in the 30’s, and I’ve always found those to have a more earthy-themed look and feel to them. Regardless, it works here. Paramount’s transfer isn’t quite perfect, but it’s far and away the best the movie has ever looked on disc.

The previously-released Blu-ray contained a DTS ES and Dolby Digital EX (I haven’t typed those in quite some time) mix that…got the job done, but not too entirely well. Paramount’s new 4K offering ups the ante with a new Dolby Atmos mix and, let me tell ya, it was worth the wait. I’ve often considered this film to have one of the most unique and interesting opening sequences I’ve seen. The instrumental mix grabs hold and really packs a punch. Vocals sound more crisp and sharp while the surrounds seem to have more impact than they did before. It’s not a war movie, things don’t blow up and so forth but it’s a nice, well-rounded track that’s sure to please.

Unfortunately we don’t get any new supplements, those found on the previously-released Blu-ray are all ported over to the 4K disc.

This is a really great movie. It’s been far too long since I sat down and watched it. Paramount’s new 4K offering gives us better picture and better sound though, sadly, now new supplements. It’s certainly worth the upgrade. 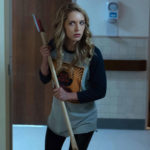 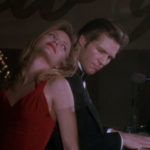