What does “Hands Across America” and a modern-day horror movie have in common? Something. Or maybe nothing. And that’s about the way I came out of my viewing of Us. The film, both critically and commercially successful, is the second outing by comedian-turned-horror movie maker Jordan Peele. If you’ve managed to avoid Key and Peele, stop right now and go check out an episode. It’s hilarious and adequately showcases the talents of Keegan Michael Key and Jordan Peele. The show has ended and made stars of the two, er, stars and it’s clear to see why. Peele made headlines with his initial directorial debut with Get Out and it even garnered an Academy Award for Best Picture (many, including myself, thought it undeserving) though the win for Best Original Screenplay seemed more realistic. Nevertheless, Peele has already established himself as one of the premier horror film directors with just two films under his belt. Let’s head to Santa Cruz and see if we can figure what Us is all about.

The Wilson’s, Adelaide (Lupita Nyong’o) and Gabe (Winston Duke) are heading to their summer home with children in tow. Zora (Shahadi Wright Joseph) and Jason (Even Alex) are looking forward to it. They decide to take a side trip to Santa Cruz beach to meet up with friends Kitty (Elisabeth Moss) and Josh (Tim Heidecker). But as we saw in the prologue, this is the same beach where Adelaide had a traumatic incident occur as a child. Things seem normal, but when the family is terrorized by what can only be described as their doppelgangers – things get weird. And it’s all got something to do with the beach.

And that’s all you get.

To say any more would be to ruin the plot and that’s the one element that the film has going for it. Well that and great performances. Unlike most other cookie-cutter films, Us does tend to stay with you long after the credits roll. And that’s a good thing and I like to think about the films I see. And, make no doubt, there’s a lot going on in this film and symbolism permeates nearly every scene. If anything, this seemed to somehow make “Hands Across America” relevant again. Then again it wasn’t really relevant when, back in 1986, it was a total failure. Nevertheless, Peele and a cast of talented actors do make this one to watch once, though I found on a subsequent viewing that it made a lot more sense (or I’m just slow). Perhaps you will too?

Us is a dark movie in the most literal sense of the word. The film takes place almost entirely at night, starting out in the eerie Santa Cruz boardwalk. Universal’s 2.39:1 HEVC 4K image stands firm, though and delivers a great-looking picture. With a film like this, it’s ripe for errors – be it macroblocking, contrast or any sort of artifacting. But thankfully none of those are an issue. We get a crisp, sharp picture with loads of detail. Shadows are solid, colors (what few there are) are bold and vibrant. It’s a step above the Blu-ray included in this set, though that looks great as well.

The included Dolby Atmos soundtrack provides an ample soundstage that gives the film plenty of room to flex its aural muscle. Though the genre is horror, I didn’t really catch any “jump scares” or maybe it’s that I just wasn’t scared? Truthfully, I was reminded of Peele’s last film, Get Out, in the audio department. Vocals, especially those of Lupita Nyong’o’s “character” are perfect. There are a few moments of general ambiance that give the film a more naturalistic feel, but any way you go, it won’t disappoint.

Fans of psychological horror will no doubt be in heaven while watching this. I found Get Out a bit more interesting, but this one tended to stay with me longer. Universal’s disc both looks and sounds great and offers a bevy of supplements that’s sure to please. This is an easy recommendation. 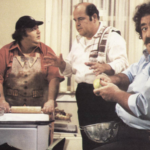 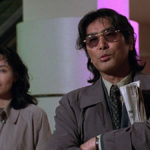