Let’s take a trip back to 2008, shall we? The world was a bit different in terms of movies. Not every film was about a superhero, the “found footage” genre was basically non-existent and though the name J.J. Abrams was known, it wasn’t quite the marquee name it is today. Other than that, things were about the same…sort of. There was a little movie called Cloverfield that came out and took the world by storm. Ok, maybe “by storm” isn’t the right term, but it did have an impact and it’s one that’s still relevant today. I’ll go on the assumption that if you’re reading this that the aforementioned film has already been seen or there’s at least a passing interest in it. To recap, it follows a group of friends as they try to make their way off Manhattan while avoiding a 300 foot alien. The story is told through the eyes of a video camera so we see what it sees. And that’s it. A sequel was tossed around, but it never came to fruition. So here we are – it’s 2016 (as of this writing) and now we’ve got our sequel in 10 Cloverfield Lane. Ready for some aliens? Are they back? Are they ready for more? Are there any more cities to level?

For those that loved the original and wanted more, well I’m sorry to tell you that this isn’t your film. This movie finds us in present day just outside of New Orleans, Louisiana. We meet Michelle (Mary Elizabeth Winstead) who is aimlessly driving along a back road. She’s in involved in a car crash and awakens in a room with her knee in a brace and chained to a wall. Not good. She then meets Howard (John Goodman), a behemoth of a man who claims to have saved her life twice – once when he moved her inside and the next after the chemical warfare that’s going on outside. The story is validated by Emmett (John Gallagher Jr.) the other “roommate” in what she learns is a fallout shelter. Still leery of the entire station, the trio do their best to get along, though Howard’s temper tends to flare at the slightest sign of trouble. Michelle needs to see for herself if the outside world really has been under attack or if this is some grandiose scheme by Howard to keep the three of them together for a couple years.

Naturally I can’t say much more without ruining the ending and I don’t want to do that. What I can say is that this film is nothing like I expected it to be. I kept thinking that, throughout the movie, “Ok, now some alien is going to tear the roof off the place!” Nope. Now that’s fine. I understand that this is more of a spin off than a bona fide sequel, but I wonder why they went through the trouble of assigning the Cloverfield name to it? It reminds me of the last Die Hard movie in which it just seemed like another action movie albeit with the moniker of Die Hard attached to it (for no reason). Now don’t read any of these observations as negative. The more I think about this movie (always a good sign when I think of a film after the credits have rolled), the more it does stay with you. It asks questions and isn’t force fed to us like so many others. The main three actors work well with one another and it helps to create that certain kind of atmosphere that really makes a film like this click. So while it’s not Cloverfield, it’s something a bit different. And that’s not always a bad thing.

Unlike its predecessor, there was a little more “source material” to work with here. This 4K version has added HDR and Dolby Vision to the mix and though the look and feel of this movie is certainly dark, it does benefit – if only slightly. I think I only caught a scene or two of natural light, with the rest taking place in the artificial light in the bunker. Having said that, this creates a very surreal look to some of the scenes. The neon lights create shadows underneath the eyes of the actors, it’s gives a very unnatural glow to the faces and such. That’s not to say that the image is bad by any means, it’s just a different style of lighting that we’re not accustomed to. The 2.40:1 HEVC transfer certainly conveys that sense of enclosure, with the black bars on the top and bottom even “framing” the actors making them feel more compressed. Or am I reading too much into that? Nevertheless, the detail is as we’d expect – John Goodman’s beard isn’t as mighty as I’d have expected, but at least he’s sporting a different look. This is on par with Paramount’s Blu-ray releases and I really don’t have much to complain about here.

The original Blu-ray contained a Dolby Atmos mix coupled with a “downsampled” TrueHD. This 4K version has the same respective mixes, so there’s nothing to improve upon here. When the majority of the movie takes place underground, there isn’t a lot of room for dynamic sound. There are a few scenes in which the characters “hear” something above, and those are faithfully reproduced, but by and large the Dolby Atmos mix is a bit wasted. A nearly equally robust Dolby TrueHD mix is included as well, though it too somewhat falls short. Yes, I realize that I said “robust” and that it falls short – it’s not meant to be a contradiction in terms.  Vocals are faithfully reproduced with Goodman’s booming Chicago-esque accent taking front and center. There are a few songs (played via a jukebox) that sound fairly decent as well. It’s not an audio powerhouse, not by any means, but for what it is – I was satisfied.

The only real benefit of ponying up for this 4K version is a bit better picture quality. There have been no new supplements produced and the audio is the same.

I’ll have to give this one a “pass” on the 4K. While it’s nice to see a bit of improvement in color depth, there’s really nothing else to draw someone in for (another) purchase. Unless you can find a really good deal, keep the existing Blu-ray. Those expecting more of the same they got from Cloverfield will be let down here. Initially I was as well. But, looking at it as its own movie – it’s one that stays with you. Those who will accept this as its own thing will enjoy it, but those who can’t let the “Cloverfield” part of it go won’t. 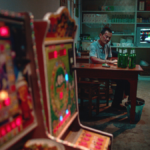 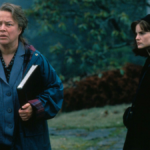