A murder case has just ended and as the jury members retire to reach a verdict, eleven of them are ready to deliver a guilty decision. All the evidence seems to be against the defendant, a young man from the slums accused of killing his own father. But since this case holds the young man’s life in the balance, all twelve members must register their votes, one way or the other. And since one of them seems to think some doubt exists, he refuses to pass a guilty vote to send the young man to his death. Each of the jurors have their own unique mannerisms and background, but in this case, the facts at hand are all that matters. While others are ready to declare the young man as guilty and end the issue, Juror #8 (Henry Fonda) insists that while he is not sure of the innocence of the accused, he does believe some doubt exists and that warrants some discussion. The others are not pleased about sitting in a small room on the hottest day of the summer, but they have no choice and such, the debates, arguments, fights, and connections start and by the time all is said and done, the life of not just the defendant, but the jurors will be changed.

I love this movie and consider to be one of the finest films of all time, a claim I do not make alone, I’m sure. This excellent film is always found on the best of all time lists, which is an honor it deserves and even after all these years, it stands up as well as ever. I think while a certain time period can be placed on the events, I think “12 Angry Men” is a timeless picture, as it touches on issues that never fade, such as justice, prejudice, and free thinking. As such, it never seems dated in the least and also never becomes too preachy, which could have happened a lot within this material. In addition to a terrific storyline and direction, this movie develops twelve character in rich, full form and to me, that is most impressive. The jurors could have been stereotyped and dulled out, but in this movie, they seem deep and complex, much more so as the film moves on. Some have more depth than others, but all are allowed time to open up, which makes the film shine and the actors the space to inhabit the characters.

This is an ensemble piece at heart, but I think Henry Fonda takes the reins and drives the film, never faltering in the least. As the lone juror who wants to talk things over, Fonda is forced to stand alone and as time passes, make his case and try to convince the others that he is right. But he never does so in an arrogant fashion, thanks to some wonderful writing and a terrific performance. We are able to see that he is conflicted at times, but wants to make sure he does his best to see justice done, even if it means putting his faith in his fellow jurors. Fonda is given some tremendous material to work with and he delivers on all counts, one of the finest performances I’ve ever seen. Other films with Fonda include How The West Was Won, Fail-Safe, On Our Merry Way, The Ox-Bow Incident, and The Grapes of Wrath. The other jurors were played by Martin Balsam (Two Minute Warning, The Delta Force), John Fiedler (Savannah Smiles, True Grit), Lee J. Cobb (Our Man Flint, The Final Hour), E.G. Marshall (The Chase, Nixon), Jack Klugman (Tv’s The Odd Couple), Ed Binns (Night Moves, Patton), Jack Warden (Used Cars, Dirty Work), Joseph Sweeney (The Fastest Gun Alive), Ed Begley (Billion Dollar Brain, The Unsinkable Molly Brown), George Voskovec (Butterfield 8, The Iceman Cometh), and Robert Webber (Private Benjamin, The Dirty Dozen).

Criterion, as they so often do, has taken the initiative here and given “12 Angry Men” a wonderful re-mastered picture. A new 2K HD image was taken from the original 35mm film negatives and the result is, well, stunning. The 1.66:1 AVC HD black and white image has simply never looked better. Instances of dirt and debris has been digitally removed, but not to the point where it looks fake or processed. Black levels seem a bit richer and elevated. Contrast is right on the money. There’s still a bit of grain, but it was left there intentionally. We can make out the beads of sweat on the jurors’ faces, see the wrinkles in Henry Fonda’s forehead, the thinning of his hair. For a movie of this age, the image is one of the best I’ve ever seen. And, oh my, how glorious black and white looks on Blu-ray.

The audio is a bit of a different story as we only get an English LPCM mono soundtrack. We’ve often said that “mono is as mono does” (which, when you think about it, really makes no sense at all) but when there’s only one channel involved there’s a limited amount of action that can happen. The sound mix was reduced to remove all elements of hiss, static and anything else that might get in the way of an otherwise superb mix. If ever there was a movie that was dialogue-driven, it’s this one. Vocals sound full and rich and though there are a few instances of a slight hiss in the background, they’re few and far between. Again, for a film of this age, it sounds pretty darn good.

The previous MGM DVD had only the film’s original theatrical trailer, but I’m pleased to say that Criterion has unearthed quite the plethora of supplements for this release and let’s dig right in, shall we? First up is the 1955 TV version of “12 Angry Men” complete with an introduction by Ron Simon (curator for the Paley Center for Media). He’s also interviewed for a piece about writer Reginald Rose. There are also two new interviews included. We hear screenwriter Walter Bernstein’s comments about director Sidney Lumet (who just passed away) and cinematographer John Bailey as he discusses Boris Kaufman, also a cinematographer. We also get Lumet’s 1956 teleplay “Tragedy in a Temporary Town” as well as some archived footage and interviews with Lumet. You’ll be happy to know that the original theatrical trailer included on the MGM DVD is also included as is a booklet featuring an essay by writer and law professor Thane Rosenbaum. 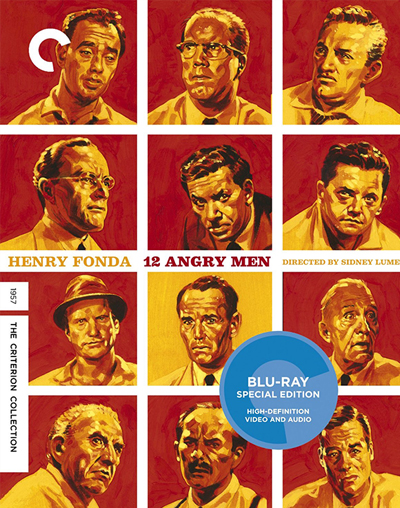