I’m an Adam Sandler fan. Always have been and most likely always will be. Though I haven’t cared for a few of his more recent films, there are some that will always be on my shelf: “Happy Gilmore”, “Billy Madison”, “Bulletproof” and “50 First Dates.” I’m not really sure why I like this film as much as the others, but something about it makes me watch it about once a year. Maybe it’s when I saw it in the theater or who I saw it with or maybe that I just like a fairly good romantic comedy. Who knows? I can and will say that this isn’t your typical Adam Sandler movie and he does have a soft spot. Then again, maybe Drew Barrymore and Sandler were trying to re-create the chemistry that they had in 1998’s “The Wedding Singer?” Regardless, I decided to dig in my bin of Blu-rays and couldn’t believe that a review of this movie wasn’t part of the site, so…from the vaults – here it is!

Sandler plays Henry Roth, a veterinarian of sorts and evidently a man who can show a tourist a good time on the island of Hawaii (and in the bedroom). Henry’s glory days are starting to wane and what he wants more than anything is to find a nice girl to settle down with. And, wouldn’t you know it, he finds just that girl in Lucy (Drew Barrymore) whom he meets at a restaurant. The two share a perfect day, but as Henry learns the hard way – it isn’t meant to be. You see Lucy survived a bad car crash the year prior and now suffers from short term memory loss. When she awakens every morning , it’s like the a completely new day with all of her memories erased. Not many movies out have elements of “Memento” and “Groundhog Day” but this one manages to pull them together nicely. Henry, not wanting to give up, keeps pursuing her with varying degrees of success. However he hits a snag when Lucy’s father (Blake Clark) and brother (Sean Astin, at the time fresh off his success from “Lord of the Rings”) get involved. Will Henry be able to help Lucy recover her memory or are they destined to never be together?

“50 First Dates” is a smart, fun and somewhat intriguing movie. I will say that it doesn’t follow all the pratfalls of a typical romantic comedy. For those wondering, yes Sandler’s sidekick Rob Schneider is in this and has his token share of lines. Nothing against Schneider, but honestly where would this guy be if not for the success of Adam Sandler? Nevertheless, Sandler is going in a different direction than he did about a decade ago and it’s for the better. His more “family friendly” films seem to do well at the box office and I neglected to mention his recent “Bedtime Stories” as one of his better films. Call me kooky or old-fashioned, but I’m a sucker for a good story and a little chuckle along the way. For those who haven’t seen it “50 First Dates” might just be what the doctor ordered.

“50 First Dates” was one of the first Blu-ray titles available back when the format debuted in 2006. As such, the MPEG-2 transfer has a few issues and it certainly doesn’t compare to some of the newer titles available. We lose that genuine 3-D effect that’s so associated with Blu-ray and don’t get me wrong, this isn’t a bad transfer. The movie takes place in Hawaii and we get plenty of shots of crystal blue water, azure skies and even the wardrobes seem to emit a vast array of colors. On the down side there’s a bit of grain associated with some of the exterior shots and a bit of movement in some of the shots as well. Flesh tones seem a bit on the muddy side at times, but aside from that it’s all good.

The somewhat now defunct PCM uncompressed soundtrack is average at best, though films like this don’t really strive to be audio heavy. Dialogue is at the heart of this film and I found nothing wrong with the way it sounded. Surrounds are a bit underused, but again – this film isn’t trying to win any awards when it comes to dynamic audio. The overall ambiance is pleasing and I highly doubt anyone will be disappointed by the way this film sounds.

“50 First Dates”, being a new to Blu-ray title, came out before they were producing Blu-ray exclusive content and as such we’ve pretty much got the exact same features as the DVD. We start off with the audio commentary by director Peter Segal, Adam Sandler and Drew Barrymore. Barrymore is somewhat of a silent partner as Sandler and Segal (long time cohorts) dominate the track. I enjoyed this commentary and it only added to my allure of the film. We also get a small featurette “Talkin’ Pidgin” which is evidently Hawaiian slang. A few outtakes are also thrown in for good measure. 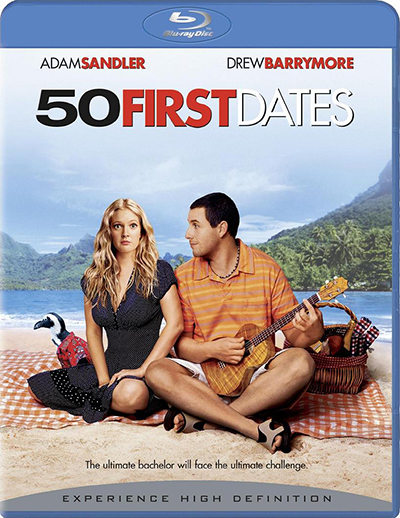