One thing that’s always intrigued me about films are the ones based on real-life events. It’s somewhat surreal to see images on a screen that depict something that, at some point in time, actually happened. I realize that might sound a bit odd, but I just find that if something is truly that fascinating to have “made” it to the big screen, it really must have been something worth note.  Totally switching gears, I really don’t pay too much attention to what’s going on in the world. That’s actually a bit difficult when every device constantly flashed up headlines. Still, if you’d have asked me who Chris Kyle was prior to this movie coming out, I’d have shrugged my shoulders. And if you’d have told me that this film would have been the top-grossing domestic movie of 2014, I’d have never believed it. After all this was a year when we had The Hunger Games, a couple of Marvel movies (Captain America: The Winter Soldier and Guardians of the Galaxy) as well as a Transformers movie. That’s saying something.

The film tells the story of Chris Kyle (Bradley Cooper), a native Texan who, after seeing the aftermath of the 1998 Embassy bombings, decides to enlist. He makes it through the arduous Navy SEAL training and eventually takes on the role of a sniper. Chris has a gift for shooting and it’s this gift that propels him to become a very “successful” sniper, saving his brethren nearly each and every day.  Told in flashback form, Chris recounts some key moments in his life as he meets his wife, Taya (Sierra Miller) and how they both handle Chris’s deployments to Iraq (he did four tours, total). The movie is a morality play which shows not only the brutality of war, but how the main character and others involved in his life deal with it once they return home.

The movie wasn’t without controversy and thankfully all of the Hollywood celebrities have Twitter, so they instantly convey their thoughts and feelings to millions of others and piss them off. After some brief reading it appears that folks like Seth Rogen and Michael Moore chastised the film (for various reasons). Odd that Rogen would take that stance, since his movie The Interview was also under scrutiny at the time. Evidently someone (and I don’t remember who) claimed that the role of a sniper is considered an act of cowardice. I won’t personally comment, though I’d say in a time of war – the rules of normal society don’t apply.  At any rate, controversy or no, this is just a re-telling of Chris Kyle’s book and it’s done so in dramatic form with Clint Eastwood calling the shots. Eastwood, a vet himself and is no stranger to military films with the recent Letters from Iwo Jima and Flags of our Fathers in his repertoire. It might not be an easy watch for some, but American Sniper is something that should be seen by all.

This is the same video presentation as was found on the original American Sniper disc. Presented in a 2.40:1 AVC HD image, I simply could not find a single thing wrong with this image. It’s perfect in every way. The detail is so amazingly precise, I felt that I could reach out and touch the actors. The stark desert scenes are contrasted nicely with deep, dark blacks. Conversely, the interior shots aren’t lacking in depth and color either. Cooper’s beard bears the intricacies that are so clearly defined, it’s as if he’s in the room there with you. Colors are brash, bold and bright. Everything looks amazing, be it the spattered blood on the walls/ground or the clouds of smoke during the heat of battle. Absolute perfection.

Again, this is the same Dolby Atmos/Dolby TrueHD mix as found on the original release. And this is one of those films that makes me wish I had a Dolby Atmos setup. I don’t, obviously. Still, for those that aren’t so equipped, the movie defaults to a Dolby True HD mix that’s nothing short of perfection. There are several amazing examples of how good this film can sound. The muffled thumps of a sniper rifle being fired are contrasted with the explosion of a grenade blowing up. The film’s score is so mesmerizing and encompassing, that it was nearly a dizzying effect for the viewer. This, I imagine, was the intent as it gives a true impression of what it’s like to be in battle. Likewise, vocals are rich and crisp with Cooper’s Texan-drawl sometimes nearly unrecognizable (I found myself saying “what did he just say?”). Still, this is one of those soundtracks that really makes the film.

The original release was relegated to a couple of featurettes and this Commemorative Edition adds a couple more on a second disc, though these are focused on Chris Kyle and not the film itself.

I really didn’t see the controversy in this film. I’d not heard of it prior to its release, but after watching it and doing a little research on Chris Kyle, it’s clear that Bradley Cooper threw himself into the part. The film seems to capture the brutality of combat and its subsequent recurring after-effects after the soldiers are sent home. While the technical specs are the same as the original release, we gain a second disc of new supplements (and a trailer) though the Digital UV code has been lost. Also, if it matters, a portion of the proceeds to to benefit charity. 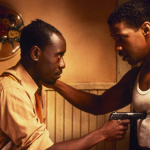 Devil in a Blue Dress (Blu-ray)
Next Article 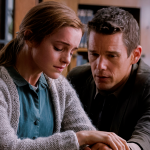