Judah Ben-Hur (Charlton Heston) has a very comfortable lifestyle, as he is a Jewish price who makes a nice living as a merchant. In addition to his work, Judah loves to spend time with his mother and sister, whom he loves very much and is very close with. Soon, he is visited by an old friend, Messala (Stephen Boyd), who has become a Roman commander. The two are pleased to meet once again, but since their lives have taken much different turns, they are more distant than before. This is never more evident than when a procession is led through the streets and a loose brick falls, almost hitting the governor. The brick came loose from Judah’s house and even though Messala knows it was an accident, he imprisons Judah’s family and sends Judah off to become a slave. Now away from his loved ones and previous life, Judah swears revenge at all costs and as time passes, his resolve grows by leaps and bounds. But as a simple slave, there is not power within reach and however he tries, any kind of action will be most difficult. Will Judah be able to attain his revenge and if so, will he be able to salvage any remnants of his prior life?

After an immense waiting period, one of the most epic films of all time has hit our beloved format, in the form of the classic, Ben-Hur. Although other massive scale pictures were done around the same time, I think Ben-Hur aces them all and emerges as the best epic in the business. From the cast of thousands to the breathtaking chariot race to the lavish production design, this movie has it all and then some. I mean, even the aspect ratio is larger than most films (2.76:1), so you know this is one huge movie and on all counts, it exceeds the praised reputation it has gained. Ben-Hur has drama, romance, action, and suspense, pretty much all the elements a movie can have, but it never seems loose or disconnected. The running time of well over three hours might ward off modern audiences, but they’d be missing one of all the all time greats. With eleven Oscars under its belt, this film is what Gladiator was supposed to be, but that movie just couldn’t measure up in the end. The wait was torture for this epic to reach Blu-ray, but with a terrific presentation and some nice extras, it was well worth the effort. I am displeased that Warner didn’t include the original soundtrack, but even so, this disc is one of the easiest recommendations I’ve ever made, a must own for most and a must see for all film fans.

His acting hasn’t won over everyone, but I happen to like Charlton Heston’s work a lot, especially in this picture. Of course, he took home the Best Actor Oscar for his efforts, but even so, he isn’t usually regarded well for his performances. I know he goes over the top often, but his clenched jaw and line delivery just strike a chord with me, I can’t help but enjoy his work. I do think this is one of his best turns in terms of traditional acting, but I happen to prefer his work in lesser known films and cult classics. But I still have a lot of fun watching him in action here, as he proves he belongs among the bigger names in the business. Other films with Heston include The Ten Commandments, El Cid, Planet of the Apes, Soylent Green, Touch of Evil, and The Omega Man. The rest of the cast includes Hugh Griffith (The Abominable Dr. Phibes, Oliver!), Andre Morell (The Message, Three Cases of Murder), Stephen Boyd (The Big Game, Fantastic Voyage), Martha Scott (Our Town, Strange Bargain), and Jack Howard (Zulu, Lawrence of Arabia). Ben-Hur was directed by William Wyler, who also helmed such pictures as The Big Country, Roman Holiday, The Best Years of Our Lives, Funny Girl, and The Westerner.

If you’ve never had the chance to sit down and watch any version of “Ben-Hur” well then you’re in for a treat with this new Blu-ray. First off, it’s a good thing that most of us have widescreen HDTV’s as watching this movie on a standard 4:3 screen is like peeking through a window. The massive and extra wide 2.76:1 aspect ratio is among the widest for any major release and you’ll notice it. Then again, this is “Ben-Hur”, a movie that practically defined the word “epic” in every sense of the word. Warner’s previous special editions for this film have looked great, but they went all out and literally re-mastered this film frame by frame with an 8K scan. Warner spent over a million dollars on this Blu-ray transfer and we have to ask ourselves if it was worth it. In a word – yes. The 222 minute running time would be a tax on most films, but this movie is wisely spread across two Blu-ray discs. Colors are extremely bold and vibrant. Fleshtones, though a bit overcooked at times, are faithful to the original and have never looked better. Detail is stunning and the famous chariot race scene has never looked better. This AVC HD transfer is just about as good as I’ve seen a film look and once you factor in the fact that the movie is 50 years old – your jaw will drop. This is, without a doubt, one of the best transfers I’ve seen for a film and well worth the price of admission.

A breathtaking picture is one thing and if this was the 1925 version of the film, that would be all she wrote. But this classic now benefits from a newly re-mastered DTS HD Master Audio soundtrack that essentially parallels the transfer in regards to how it sounds. The sound stage is clear and robust engaging every channel on multiple occasions. With a running time of over 3 hours, there are plenty of opportunities for the surrounds to chime in. Vocals are crisp and lack any sort of distortion that might be associated with a film of this age. Of course the signature scene for this film is the chariot race and let me say that it does rival some of the more modern films when it comes to how this sounds. The racing of the horses, the cracking of the whip and everything in between. It’s amazing how good this sounds and, like the video, factor in the age of the film and you’ve got yourself a winner here as well.

All of the supplements from the 2005 DVD are present here as is a new documentary – “Charleton Heston and ‘Ben Hur’: A Personal Journey” (more on that later). And then there’s the attractive, and very robust packaging (see below). We start off with a commentary track by historian T. Gene Hatcher who literally wrote the book on the making of this movie. Also present is a commentary by Charleton Heston, though his comments are few and far between. Also present is the original 1925 silent version of “Ben-Hur.”

“Ben-Hur: The Epic that Changed Cinema” runs about an hour and has interviews with some directors and cast and crew from the movie. There are also some vintage shots with William Wyler, which gives this documentary a nice look and feel. Also included is the 1993 documentary “Ben-Hur: The Making of an Epic” hosted by Christopher Plummer (“The Sound of Music” and later “Dragnet”) which is essentially the same thing, but with more of a focus on taking the novel to the screen. Some screen tests are shown with none other than Leslie Nielsen among the actors who were turned down for a role in the movie. As previously mentioned, the new documentary is more of a tribute to the late Charleto Heston. We get some insight into his personal life via some home movies as well as his more spiritual side. There’s some highlights from the 1960 Academy Awards where this movie cleaned house, some newsreel clips and the original theatrical trailers.

A word on the packaging, it’s one of the biggest sets and unlike most Blu-ray’s, won’t easily fit on your shelf. All of the material is housed in a black embossed cardboard box which keeps the 3 disc set in place. There are also a couple of hardcover books, the original press book and even a replica of Heston’s personal journal. I do like some of these sets that Warner does, though if space is an issue then you might want to consider that. 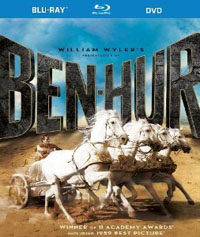