After a string of duds, Johnny Depp needed a role he could sink his teeth into. He gets just the chance with Black Mass. The film tells the true story of James “Whitey” Bulger, the most famous criminal of Boston, but also an FBI informant. Depp stars as Bulger, and quite literally disappears into the role with heavy makeup and a receding hairline. The film owes a big debt to Goodfellas as the subject matter is very similar and it even duplicates that film’s infamous “Do I amuse you?” scene. Oddly enough, another Martin Scorsese flick, The Departed featured a character loosely based on Bulger. The film with an interview with one of Bulger’s old colleagues, Kevin providing the Feds with Intel on Bulger. We then cut to the 1970’s where we see Bulger in action. A point is made to show Bulger’s intensity as we see him murdering people, threatening people at bars and so on. Before long, we meet FBI Agent John Connolly (Joel Edgerton) who persuades Whitey to become an informant to the FBI. It takes some convincing, but Whitey eventually agrees. Bulger isn’t given many stipulations outside of not being able to murder anyone while he’s working with the feds. We then follow both Connolly and Bulger’s stories simultaneously. Many viewers will probably be surprised by how much screen time the Edgerton character is given. For long stretches, Bulger is pushed to the sidelines. Outside of Depp and Edgerton, the film features a top notch cast. We get performances from Kevin Bacon, Peter Sarsgaard and Benedict Cumberbatch to name a few.

For all the film gets right (casting, authenticity, the Boston setting), there are also some major problems with it. Pacing is a big problem as the film never really finds its groove. The early scenes with Bulger show promise, but any time the film gets away from him, it gets less interesting. Joel Edgerton’s story arc isn’t nearly as exciting, and it takes up a large portion of the film’s running time. While Director Scott Cooper nicely recreates the 1970’s, but the film itself can’t help but feel rather generic. As mentioned earlier, Goodfellas seems to have been a clear inspiration for this film, but there’s a feeling of been there, done that through several scenes. That’s ultimately the film’s biggest problem is that it never establishes an identity of its own. While Depp commits to this performance, and it’s a nice return to form for him, the film fails to meet expectations. It has some great moments, but they never turn into a satisfying whole. Black Mass makes for a decent rental, but nothing more. There are far better mob related films that I’d recommend before this one.

This is one of those titles that, even before I watched the film, I could tell how it would look. Granted that’s a bit arrogant, but a gritty crime drama set in the past can only look so many ways and still remain convincing. And, lo and behold, I was correct! There’s an ever so slight fine layer of grain that perpetuates from beginning scene to end, but don’t let this deter you. The detail is stunning and try as I might, I wasn’t able to detect where Johnny Depp’s prosthetics began and where they ended.  Colors are a bit bold and darker than usual, then again this isn’t your typical happy and carefree film, so things have a way of looking a bit polarized. Plenty of leather jackets, sunglasses and manes of slicked back hair set the tone for the film. Warner’s 2.40:1 AVC HD transfer is certainly everything we’d expect and a bit more.

The included DTS HD Master Audio sound mix has a certain quiet authenticity about it. By and large, this is a dialogue-driven film that lets the actions do the talking and not the speakers. Ok, I’m ok with that. Granted, there are a few scenes in which the surrounds take control, maybe some tires squealing here and a gunshot there, but the front stage takes the lion’s share of what’s offered. Oh and this is set in Boston, so we once again are treated to the actors rolling their “r’s” and “h’s” proliferate. If you need a point of reference, maybe check out The Departed of The Town.  Suffice it to say, it’s a good, solid mix that’s sure to please but nothing that will be too memorable.

Despite some great performances, led by Johnny Depp, Black Mass can’t help but feel like a disappointment. The pacing is off and the story lacks a strong focus for us to become fully invested. It’s also a victim of bad timing since we’ve seen so many films handle similar material in much better fashion. It makes for a decent rental, but nothing more. 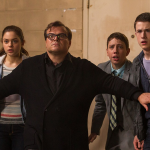 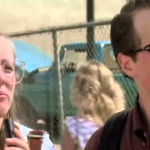