Warning: Minor Spoilers to discuss plot of film. I will only discuss the first twenty seven minutes of the film before discussing the film’s merit. If you want to skip this, go to the paragraph that begins “This opening scene…” I will still try to stay away from major reveals, but if you are a purist just skip to the bottom.

“Replicants are bioengineered humans. Designed by Tyrell Corporation for use off- world. Their enhanced strength made them ideal slave labor.

After a series of violent rebellions. Their manufacture became prohibited and Tyrell Corp went bankrupt.

The collapse of ecosystems in the mid 2020s led to the rise of industrialist Niander Wallace. Whose mastery of synthetic farming averted famine.

Wallace acquired the remains of Tyrell Corp and created a new line of replicants who obey.

Many older replicants – Nexus 8s with open ended lifespans – survived. They are hunted down and ‘Retired.’

Those that hunt them still go by the name – Blade Runner”

So begins the sequel to the now classic Blade Runner. Within just a couple minutes the film sets up the new world in which the film takes place. It then jumps to K (Ryan Gosling) asleep in his floating car as it arrives at a desolate farming area where he has tracked down a potential Nexus 8, Sapper Morton (Dave Bautista.) He is a protein farmer that has lived there since 2020. K makes it known that he is there to retire him, and Sapper puts him through a wall in a violent struggle. When K comes out on top, Sapper asks him, ‘How does it feel – killing your own kind?” K replies, “I don’t retire my own kind because we don’t run. only the older models do.” Sapper says, “You younger models are happy scraping the shit, because you’ve never seen a miracle” K puts him down. Finding a small flower in front of a tree, he uses his drone style device to scan the grounds beneath it and finds a box. He reports back the findings to Lieutenant Joshi (Robin Wright Penn) who asks that he return while a crew excavates.

Returning to Los Angeles it is completely overgrown by development and it has fog and snow covering the ground before rain hits later. Returning to the LAPD he walks through the halls being called a “skinjob” before answering questions that determine if he is still mentally sound and free of kinks in his system. Returning to his apartment he meets up with his beautiful girlfriend Joi (Ana de Armis) who happens to be a hologram. After showing his girlfriend her new upgrade where he can take the hologram with him places, he returns to the LAPD where the box has revealed a skeleton that has been buried for thirty years. The skeleton had perished during childbirth. Inside the bone he finds what seems to be a model number.

This opening scene sets the stage for a film full of surprises. I love the first film. It helped to develop my affinity for science fiction despite the fact that my first viewing didn’t blow me away as much as subsequent viewings. It is safe to say that the first reveal of the city in Blade Runner is one of the most influential scenes in film history. It is almost impossible to find a science fiction film (or novel) that does not borrow from that film visually. The reason that people come back to it time and time again is that it allows you to inhabit a different world that is vibrant and familiar but very different from our own. I can thank that film for introducing me to Philip K. Dick, one of my favorite novelists of all time. Since my college days I have read on average at least one Philip K. Dick novel every year, and he was just incredible.

This leads to the big question: Blade Runner 2049 is a film that is written by the same screenwriter who wrote the first film, Hampton Fancher. Thematically, it is a brilliant extension of the universe that Hampton Fancher developed in the first film. It takes a universe that he created and makes changes to it that make sense and fit well within the frame of the world set up previously. The characters have drones that assist them, holographic girlfriends (this is similar to Dick’s electric sheep,) and the environment has turned even more toxic. Much of this is in keeping with the world of Philip K. Dick and feels like an extension of what they had created. Here is the interesting part – the plot itself is not very much like a Philip K. Dick novel. When watching the film I kept thinking to myself, “this is a great extension of the first film, but Philip K. dick would have never gone down this path.” This nagged at me during the viewing, but luckily I discovered something else.

The film still works. This is not a sequel to Philip K. Dick’s Do Androids Dream of Electric Sheep? but a sequel to Hampton Fancher’s Blade Runner. It is a visually spectacular film that relies upon the genius of the newest great director Denis Villeneuve and amazing cinematography by the legendary River Deakins (who had previously worked with Villeneuve on the amazing Sicario.) This is a film that pays great homage to what was there before – the bright neon lights, the sense of loneliness in a desperate future, the same universe – but has changed the ground rules of what the focus of the film should be. It is the most visually appealing movie that was released last year. What Deakins and Villeneuve accomplished is astonishing to behold. The world they have presented is beautiful and hostile and bleak and colorful. It is a world that grans my attention for the length of the film. It is also a world that is not reaching out for people that did not like the first Blade Runner. If you did not like that one, this film will not appeal to you any more than that film did.

This is a film that is epic in scope with a runtime that comes close to three hours, but it does not feel like numerous scenes just thrown together. The acting is top-notch. Ryan Gosling is great as brooding silent types (see Drive for good reference) and he nails it. Harrison Ford is also great in the film. With each scene, Harrison Ford seems to be reclaiming his ability to act again. Gone are the days of phoning it in and thinking nobody would notice (Firewall, Indiana Jones 4.) We would be so lucky if he can keep on this path since he was a national treasure for so many years. Supporting characters are also good in their roles with Robin Wright Penn, Ana de Armis, and Sylvia Hoeks all doing a fine job. The music by Hans Zimmer and Benjamin Wallfisch is excellent despite never quite reaching the heights of the Vangelis score of the first film (but that is arguably one of the high marks of cinematic scoring, so who is to judge?)

Not every part of the film works completely. A few lines stick out like a sore thumb from the others like when a woman claims that she has never seen a tree. That made me shake my head. I also just could hit force myself to care about the live interest between Joi and K. I just could not connect with that personally.

At the end of the day, this film was a critical darling for good reason. It gives you a chance to live in a breathing living world that is the same and different from ours for nearly three hours. This is epic filmmaking and was one of my favorite films of last year, one of the only films I made it to in the theatre, and one of the only films I wanted to immediately watch again. If they feel like making another sequel to this in twenty years (or next year) I will be there in a heartbeat. I am happy to report that Denis Villeneuve knows how to make a great film and it was a good choice to hand the reins over to him.

Director Denis Villeneuve has a knack for creating “visual flare” (for lack of a better term) and to say that this film is visually ambitious is somewhat of an understatement. This Blu-ray brings to life the noir’ish futuristic vision of the filmmakers and though CGI dominates, there’s an “old school” method of filmmaking here at work as well. Many of the scenes were shot with highly-detailed miniaturized models. That aside, the dark, yet oddly colorful look is unique to the film and right up there with some of the most interesting spectacles around. Warner’s 2.40:1 AVC HD image is nothing short of perfection and should leave audiences with little, if anything, to complain about.

What a treat! The Blu-ray sports a Dolby Atmos soundtrack with a “backup” DTS HD Master Audio there in case you’re not equipped. There’s a lot going on here that’ll keep your ears buzzing and head spinning for the 164 minute running time. Vocals are sharp and crisp, even though Harrison Ford has the tendency to mumble his lines (Gosling could use some diction lessons as well). Surrounds are constantly churning out the goods and the atmospheric ambiance only amplifies what’s already an amazing-sounding track. Every speaker you have gets a turn, some more than others. The LFE are used plenty as well. Again, no complaints here.

Blade Runner 2049 is bravely its own thing. While it may not be true to what I think Philip K. Dick would have written, it is a proper sequel to the first film. Denis Villeneuve and Roger Deakins need to go ahead and make as many films as possible together. This is visually the release of the year. Fans of the first film should let any petty misgivings against this film go and just enjoy seeing this world come alive again. I hope they make more of these film. I have now seen the film twice, and it just seems to get better. We have the makings of a modern science fiction classic here for fans of the original. Well done. 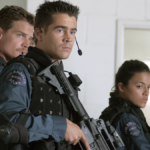 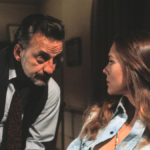