For those missing Mel Gibson and his action days, Blood Father attempts to rectify that problem. Attempts is the right word as the film isn’t quite the return to form some might hope for. Still, it packs just enough of a punch to warrant a viewing. Gibson plays John, the long estranged father to Lydia (Erin Moriarty). John hadn’t seen his daughter for years, but he receives a call from her one day. She tells him she got involved with a gang and is now on the lam. He agrees to help her out and the two of them reconnect after many absent years. He sees that she has developed a drinking problem as well.

I’ve read other reviews comparing this film to Taken with Liam Neeson. Outside of the father/daughter element, the similarities end there. The character Gibson plays here is hardly a man with special skills, and in a way that’s what elevates this film slightly. One of my major issues with the Taken films was that the Neeson character paraded around like some sort of superhero. John can very much be wounded, and the film makes its point that this character has lived a rough life as well. The clear effects of what a life of excessive alcohol and drug use can do to you. Blood Father isn’t a very long film, clocking in under 90 minutes or so, but it feels longer than that. The pacing is a bit spotty at times, but we do get enough character development to make us care to some extent. The action scenes are also quite intense and certainly pack a punch. It’s great to see a film go for it and not feel restricted by the confines of a PG-13 rating. As far as Gibson’s filmography goes. He’s done far better films, but also far worse. This one won’t be something I can revisit like the Lethal Weapon films, but it’s entertaining enough to warrant checking out.

We get a 2.39:1 AVC encoded image that is surprisingly sharp. Much of it takes place in the daytime and the details were great throughout. Background shots had nice details to them as well. Gibson has aged quite a bit, and the wrinkles on his face and gray hair are heightened. We also get a fair share of blood. All of it is well displayed here. The image will please fans.

The DTS HD track is also strong. The quieter moments shine, but when things get loud, the track kicks into high gear. There’s a nice depth to the track. There are a few motorcycle chases and plenty of gunshots that add plenty of punch. Like the transfer, this track compliments the film nicely.

While hardly essential viewing, Blood Father does have enough qualities to warrant a viewing. It’s not something I’d return to more than once, but it’s a worthy rental. 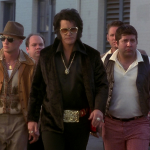 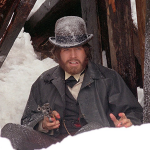