While some may argue that “Bridget Jones’s Diary” is merely an updated version of the classic, Pride and Prejudice; others argue that it may be another light-hearted English comedy. I suppose both are right. More and more these days, we’re seeing our leading men play the role of the antagonist. Most recently Denzel Washington in “Training Day”, Harrison Ford in “What Lies Beneath”, Keanu Reeves in “The Watcher” and Hugh Grant in this fine film. No longer do we have to rely on the Alan Rickman’s of the world to portray the “bad guy”…no sir. Of course, Hugh Grant plays a much more likeable “bad guy” than all of the above names, but he’s the greater of the two evils in my honest opinion. A note about Renee Zellweger for a moment…I have not really not had an opinion on this actress until I saw this movie. In Hollywood these days, another pretty face is just as common as anything else. Sure, she had a good role in Jerry Maguire, but could she stretch her acting skills and become a convincing Brit (keep in mind, she’s from Texas)? In this reviewer’s opinion…yes. I’ll get into it later, but Director Sarah Maguire does comment on her choice of Zellweger for the role. Additionally, all involved did know the consequences when they decided to go with her as the choice for Bridget (as opposed to a classical English actress–you know–Gwyneth Paltrow)!

Bridget has just had a very long night. It’s New Year’s Day and she has once again awakened to a throbbing head, clothes everywhere and an ashtray full of cigarette butts. She, like so many other people, decides to make a resolution to change her life around. She vows to keep a diary of all her daily activities and to tell the complete truth, no matter what the consequences. Add to this the fact that her boss at work, Daniel Cleaver (Hugh Grant) starts flirting with her via email. Bridget is at that age when women start to feel their biological clocks ticking away and takes advantage of her current situation. She starts to sleep with her boss. Add to the formula the fact that she has a very nasty tendency to make a complete fool of herself while speaking in public. It’s a scene that is repeated a few times through the movie, but never seems to lose it’s humour (intentional “ou” added to give that realistic British effect). Aside from her little group of friends, who seem to be a bad influence on her by going out and drinking all of the time, Bridget keeps running into Mark Darcy (Colin Firth). Bridget has known Mark since they were children, and they don’t quite know what to think of each other. Mark seems to look down his nose at her and thinks she “smokes like a chimney and drinks like a fish”. Still, there’s an unbridled attraction between the two that neither can ignore. It should be noted that in the recent British mini-series, “Pride and Prejudice”, Colin Firth played the role of Daniel Cleaver (Hugh Grant’s character), and while the casting was a bit odd, it did seem to work out for this movie.

Now we can sort of see the writing on the wall here…will Bridget stay with Daniel or go with Mark? It doesn’t help matters that Mark and Daniel have a very strong dislike for each other. Add to the situation that Bridget finds out that Daniel is having an affair and is to be married…all seems lost for Bridget. Hopefully I haven’t given too much away here as I tend to get carried away with movies that I really like. Odds are that if you’re a fan of movies of this genre, “Sliding Doors”, “Me, Myself I” and “Shakespeare in Love” all come to mind, then I really don’t think you’ll have much to regret by giving “Bridget Jones’s Diary” a spin. Personally, I waited until it came to the dollar theater (and only a few weeks later is released on DVD) and was kicking myself for not seeing it earlier. While the English humour (again with the “ou”) is a little hard to get at times, unless you’re very familiar with it, the movie if fresh, funny and entertaining. I almost forgot to mention, look for a heavier Renee Zellweger as well. She put on nearly 20 pounds for her role as Bridget.

It’s hard to believe that this movie is now a decade old, but the facts speak for themselves â€“ it is. I remember being very impressed with the way this looked on standard DVD, though admittedly it’s been several years since I’ve sat down and watched the film. That said, the 2.35:1 AVC HD transfer is, by and large, very strong. Colors seem bold, though a few scenes do look a bit washed out. There’s no DNR to really speak of and though the image looks a bit cleaned up in comparison to the DVD, some of the scenes feel a bit flat to me. There’s really nothing “wrong” with the way this looks and I think most will find it a very sharp picture. But it’s got enough nuances to bump it down a couple of notches.

The DTS HD Master Audio soundtrack isn’t anything too special, either. Then again this is a comedy and comedies really aren’t supposed to test the limits of your home theater. Vocals are very strong. There are a few ambient effects that are sprinkled throughout the film, but the front stage takes the brunt of the soundtrack. I’m really out of things to say here (unlike Bridget Jones). It’s a good mix, but don’t expect too much.

If you own the special edition DVD of this film then you’ve seen all of the supplements that are included on this Blu-ray. Now, granted, that’s good that they were all ported over since Lionsgate has now released this as it was originally released by Disney. I have no idea of the inter-workings of featurettes and ownership by studios, but I assume when Miramax went to Lionsgate, so did all of the things that were originally included on their discs. That said, here’s a look at the supplements. First up is a screen-specific audio commentary by Director Sarah Maguire. For only one person on the track, she manages to keep talking for nearly the whole time. Though most of her insights tend to deal with plot and she lets us in on some of Renee Zellweger’s secrets. She does tend to avoid the “Rob Reiner” syndrome (getting caught up in her own work and just mumbling an occasional “Oh…yes” here and there). Overall, it’s one of the better tracks I’ve heard. Next up is a featurette that clocks in just under ten minutes. It’s your standard featurette here, but there are some interviews with a significantly more slender Renee Zellweger , Hugh Grant, Colin Firth and Director Sarah Maguire. We do learn of the origins of the plot (Pride and Prejudice by Jane Austen) as well as some of the details of the shoot. Very interesting, but certainly not something that you’ll watch over and over again. Still included are two music videos, the first is Shelby Lynne’s “Killin’ Kind” and the second is Gabrielle’s “Out of Reach.” Both are shown in non-anamorphic video and are mildly entertaining. Another nice feature is nearly twenty pages of the original text of “Bridget Jones’s Diary”. Much like Memento, they are very interesting and gives you a good insight to the origins of the movie (the movie, not the premise). Lastly, the seven deleted scenes are shown in anamorphic widscreen and can be played either one at a time or one continuously. I feel most should have been left in, especially the humorous (“ou”) few about Bridget’s thighs! Several other trailers are shown, along with a promo for the soundtrack to the movie. All in all, I really enjoyed this film. The supplements were robust enough to satisfy me and most others I would assume. I can say that it’s a disc that I’ll watch again. Recommended.

Next up is ‘The Bridget Phenomenon’ which takes a look at the success of the movie, and of course has ‘exclusive’ scenes from the sequel. ‘The Young and the Mateless’ explores a look at the 30-something singles out there and shows the different methods and ways that folks go about just to get a date. Odd, that. ‘Portrait of a Makeup Artist’ has the Makeup Artist from both movies telling how he did their makeup to reflect their moods and show their personality, etc. I didn’t learn a whole lot here, but it did make sense. Four TV spots from around the globe are included as is the trailer for the sequel, ‘Bridget Jones: The Edge of Reason’. There are some text-based reviews of the movie (by Roger Ebert among others) and ‘A Guide to British Britishisms’ which is very similar to the ‘Cockney to English’ feature on ‘Lock, Stock and Two Smoking Barrels’ in that they take British sayings and words and give the English equivalent. If you own the special edition DVD, this is essentially the Blu-ray equivelent of that. 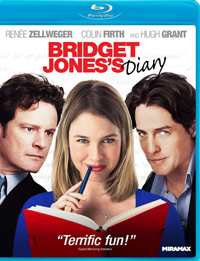