As editor of DVD/Blu-ray Authority I get a lot of movies. Let me repeat that, I get a LOT of movies. I’ve got boxes and boxes of them sitting in the garage, some good and some not so good. However of all those films, thousands, there’s one that sits atop my personal list of favorite movies of all-time. Yes, in case you haven’t realized by now, Caddyshack is my favorite movie and I’m sure I’m not alone in my statement there. Essentially it’s the “Princess Bride” of guy movies and though there are other movies out there that have made me laugh harder and think more there’s just some undeniable quality about Caddyshack that keeps me coming back for more. Naturally the same humor that made “Animal House” such a hit works here as well and as the sub title suggests “It’s the snobs vs. the slobs.” If you’re a fan of golf, a fan of outrageous comedy or just a fan of an offbeat movie that you’ll enjoy then, my friends, Caddyshack is for you.

A movie is nothing without a plot, however, and having watched the new documentary I’d never realized how troubled the production actually was. For the record, the story is rather simple (how complex a plot could it be that involves a mechanical gopher?) An idealistic caddy by the name of Danny Noonan (Michael O’Keefe) makes his way as a caddy at a posh country club in a Chicago suburb. His family doesn’t have enough money to send him to college and as we meet some of the members of the club, we see how much a difference social status makes. There’s Judge Smails (Ted Knight) whose niece, Lacey (Cindy Morgan) is in town for the summer. Al Czervick (Rodney Dangerfield), a real estate developer who’s looking to buy Bushwood for more condos. Ty Webb (Chevy Chase), a ladies man who seems to have a bit too much free time on his hands and finally Carl Spackler (Bill Murray), the greenskeeper with only one mission in life: kill the gopher. As you might imagine, it’s rather hard to fit all of this into one movie and have it make sense, but I assure you – it does.

Now let me get a bit personal on this movie…this movie is the first “R” rated movie that my parents ever took me to see. It was in a drive-in (remember those?) when I was six years old, yes six. Ever since then, I have watched this movie countless times. Hardly a day goes by that I don’t quote one of the lines (actually, all my family quotes it) and I’m happy about it. ‘Cinderella story, Cinderella boy…’, ‘I want ‘ya to kill all the gophers on the course…’, ‘$50 bucks says the Smails kid eats it…’, ‘Hey everybody, we’re all gonna get laid!’ I could go on all night long. I’m a bit curious as to why it took Warner over four years to bring this film to Blu-ray, but I’ve had my HD DVD to keep me company until now. This is, undoubtedly, one of Warner’s best-selling titles of all-time and I’m sure it’s no coincidence that it’s being released just a few weeks before the U.S. Open and strategically placed for Father’s Day. By all means, if you’ve never seen Caddyshack do yourself a favor and check it out.

I’ve owned Caddyshack on pretty much every format imaginable except Beta. I’ve had a VHS, LaserDisc, DVD, HD DVD and now Blu-ray. And in each incarnation it seems that the transfer looks a bit better. Warner has shown Caddyshack in a 1.85:1 VC-1 HD transfer that looks much brighter and more colorful than its predecessors. I’d put it on par with the HD DVD transfer, though this one seems to be a bit smoother. There are some shots that look a bit grainy and considering the age of the film (30 years and counting), the print really can’t compare to some of the movies of today. Still, detail has been improved and there are a few scenes that really do look amazing. Clearly, pardon the pun, this is the best that Caddyshack has looked to date.

I paid a lot of money for my surround sound system, but when watching Caddyshack I could really care less as to how it sounds. Yes, this Blu-ray has a DTS HD Master Audio soundtrack and it does sound a bit improved, but there’s a big gap between this and say, “Avatar” in regards to sound. By and large this is a surround mix with surrounds only coming in a couple of times during the film. Dialogue is improved, but still has a bit of a hiss to it (this has been an issue in every incarnation of the movie). There’s no real directional audio to speak of as most of the action takes place in the front stage. Any fan of this movie knows that the audio isn’t the most important thing so while it’s great to have a HD track on this disc, it’s rather inconsequential.

My main complaint with previous versions of this film has been the lack of supplements. Back in 1999, Warner gave us a “19th Anniversary Edition” with a new retrospective documentary that ran about thirty minutes. This is included on the Blu-ray but the real draw is the new documentary “Caddyshack: The Inside Story.” I actually caught this on TV a few months back and thought that this would be a nice addition to the Blu-ray and, lo and behold, here we have it. We get interviews with Harold Ramis and a few of the other producers as they tell tales of the shoot, the parties and the trouble with the studio. We get some new interviews with some of the lesser-known members of the cast and all in all, it’s a really great look inside the film. The original theatrical trailer is also included and if you want to compare how good the transfer is, compare it to this trailer. While I’d kill for a commentary track, the documentary is about as close as it comes but suffice it to say that any die-hard fan of this film will want to add this Blu-ray to their collection. 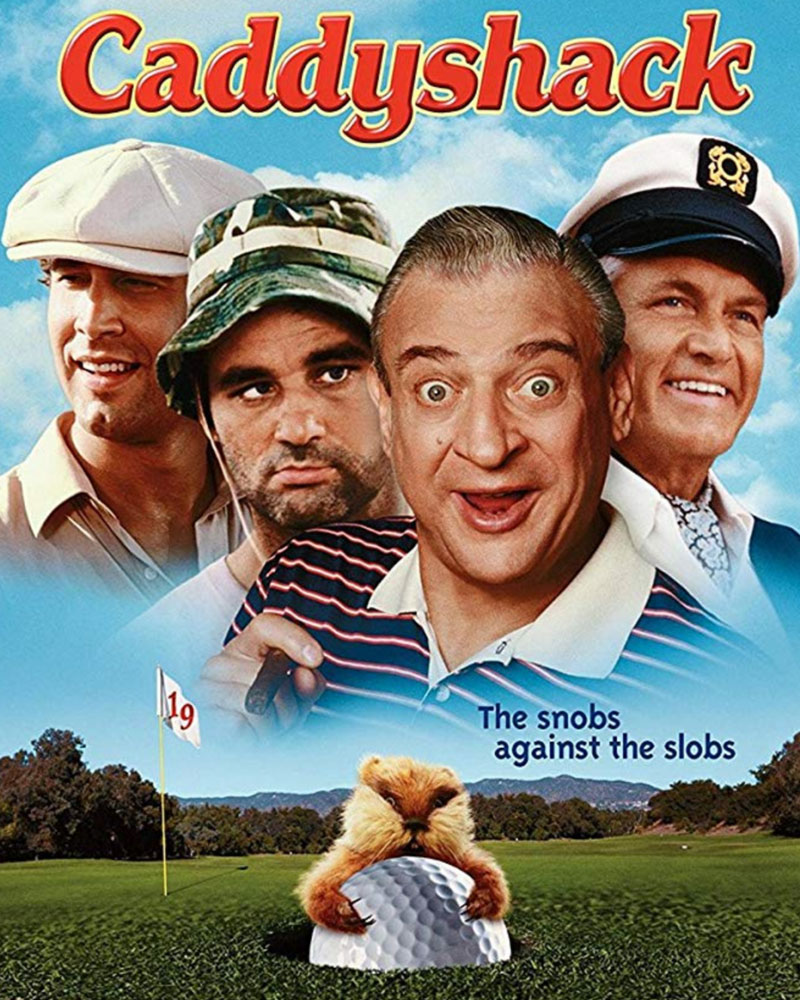