I’ll confess that I’ve never watched a single episode of the TV show, Chips. Oh, I’m more than aware of the show, but it just was never something I caught. I had no particular reason for this, but that’s that. I did have a particular reason for avoiding the film during its very brief theatrical run a few months ago. It looked quite bad and the reviews were pretty ugly. It’s been a while since I’ve seen Dax Shepard in a film, but he’s never been one of my favorite actors. Now, the chance to watch the film and review it has presented itself. I must say that I was a bit surprised by how much I enjoyed it. Make no mistake, it’s never a hilarious film or the most original or memorable, but it’s perfectly entertaining and fast paced. The plot (which I’ll discuss more in the next paragraph) is overly familiar, but the cast seems to be enjoying themselves. Led by Michael Pena and Dax Shepard, they both have a good bit of fun with their roles. At no time does the film rise to classic status, but it’s not a bad way to spend some 90 minutes and change. Let’s take a closer look, shall we?

Pena plays Officer Frank “Ponch” Poncherello who’s an FBI agent undercover at the CHP department. Ponch is something of a ladies man and we see him at the beginning of the film working an undercover operation. This eventually results in a fellow officer (played by Adam Brody) getting shot in the shoulder. Ponch is sent to the CHP department when it’s made clear that there are corrupt officers in the department. He takes on a partner to train in Joe Baker (Shepard). He’s a rookie who, at the grace of the captain. Baker is a motorcycle officer who takes the job a bit too seriously. He’s really only taking this position to try to win over his wife with whom their marriage is shaky. Baker is a motocross athlete who’s had one too many accidents so is now on several different prescription drugs. It takes a while for Ponch to warm up to him, but he does eventually, and the two are them ready to conclude the case. The villain here is played by Vincent D’Onofrio, but he isn’t given much to do. A lot of the film relies on the chemistry between Shepard and Pena and I think they deliver. At times, the film ventures into crude territory, but there were some amusing moments. The plot is really just there as an excuse to put these characters together. I must admit that it mostly entertained me. It gets a bit repetitive in the last half, but it held my interest.

Nothing short of great really. The transfer gets the job done. Details and colors are strong and smooth and the print is pristine. The image is AVC encoded with a 1.85:1 ratio. Background shots are smooth and there were really no traces of grain or defects to be found. All things told, the transfer satisfies.

The DTS HD track is solid even if it can seem a bit restricted at times. There were a couple of moments earlier in the film where it felt like it wasn’t as strong as I’m used to, but it seemed to improve as the film went on. The action scenes (and there are plenty) are what give the track the most bang for your buck. There’s good range throughout and all the channels are active and get usage.

It’ll never be mistake for a classic, but I enjoyed Chips. Sure, it’s not as funny as it could’ve been, but reading the terrible reviews, I was expecting an awful experience. I think the critics were a bit too harsh on this one. Rent it. 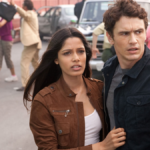 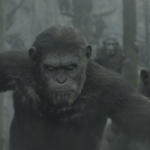