When the name “Griswold’s” comes up, everyone automatically thinks of Clark and Ellen (Chevy Chase and Beverly D’Angelo respectively)…then they think of their own family and how the two must be one and the same. That’s one of the enduring appeals of the “Vacation” series of movies, it appeals to most everyone who has ever been on a trip from Hell. The first two installments in the series showed us that the trips, though well thought out and organized in theory, can have disastrous consequences once Murphy’s Law (anything that can go wrong, will) gets involved. With the third, “Christmas Vacation”, there really was no vacation to be had. The family went nowhere and never even planned on it. In fact, the Griswolds stayed at home to enjoy the holiday season by themselves and the rest of their family came to visit them. Funny? Yes! If ever there is an instance in what can go wrong than a family vacation, it’s some “quality time” with the In-Laws. The franchise was a bona-fide hit by the time this 1989 part of the series rolled around, so much so that many consider this to be the best one of the four (the 1996 “Vegas Vacation” shall not be discussed). So what is it that keeps us coming back for more and more of the Griswolds?

Who knows? However, in this installment we find Clark as he is eagerly anticipating his bonus to buy the family a pool. We see that once again Rusty and Audrey have defied the age barrier and that Rusty (Johnny Galecki) is now about 12 years old again (he’s become shorter and evidently has regressed through puberty). Audrey (Juliette Lewis) is now older as well. I’m not quite sure what the logic is in keeping the parents the same, but constantly changing the actors. I think the funniest thing to do would be to do a fifth “Vacation” movie with the original kids all grown up with their kids and have Clark and Ellen as Grandparents. That’s just my two cents, though. Nevertheless, the Griswolds plan to entertain and Clark’s dream of lighting up his house is just one of many obstacles that he must overcome during this joyous Holiday season. The movie gets really interesting when Cousin Eddie (Randy Quaid) shows up with his kids. Eddie, left out of “European Vacation” has made notable appearances in the rest of the quadrilogy and is usually the high point of the movies. Another point of note is that this is an early appearance of Julia Louis-Dreyfuss (aka Elaine on “Seinfeld”). Could it be that her appearance in this movie got her the role in one of the best television series ever? It could be…

Nevertheless, worse comes to worse, Clark’s Christmas bonus turns out to be the “gift that gives the whole year around” and Cousin Eddie decides to do a little something about it. Describing slapstick comedies is something that takes a lot of skill, probably more than I have. However I can say this: if you’re a fan of the “Vacation” movies, then you’ll want to add this to your collection. This is probably Chevy Chase’s last good movie as he went really downhill after this. The supporting cast is great and Randy Quaid (I say once again) steals the show. Warner has wisely given this a new 16:9 transfer (as the original was full-frame) just in time for what will be the Holiday Season. Pretty smart, Warner. If anyone has any theories as to why the Griswold kids keep fluctuating between 11 and 16 years old, I’m all ears. Other than that, enjoy this Special Edition of “Christmas Vacation”. Ho! Ho! Ho!

Debuting on Blu-ray in its early days, fans have long been begging for a new transfer. Well, prayers have been answered. Since I own the previous edition, I did several direct comparisons on numerous scenes. There’s a definite improvement as the image just looks sharper overall. I’m surprised still by how good the original disc looks. The opening credits in particular have noticeably less grain than the older disc. There are other areas throughout that are improved as well. This is arguably the best the film has ever looked and probably will. The image is AVC encoded with a 1.78:1 ratio.

We get a new DTS HD 2.0 track that’s also a noticeable improvement over the old disc. There’s just a cleaner, more audible track this time. I was able to keep the volume at a pretty steady level without looking for the remote to adjust it (like I did with the old disc). This is a comedy first and foremost, so fans shouldn’t expect a robust track, but it serves the film just as it should. It also has never sounded better, so that’s a plus as well.

Sadly, not much. Exclusive to this release is a DVD copy as well as a digital copy code. Also worth noting is the new steelbook packaging. I’m not overly crazy about the new cover art, but it still works well enough. There’s rear art as well as an inner image of Clark and the others gathered around the table as he’s about to carve the turkey.

This is now the third time the film arrives on Blu-ray. Sadly, no new extras were produced. Surely some deleted footage could’ve been dug up, or maybe a retrospective? Still, fans will be delighted that the film has been given a fresh transfer. The packaging is rather neat as well. For those who don’t own it, then it’s a no-brainer. If you own the older edition, I still think an upgrade is worth it if you can find at the right price. 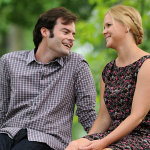 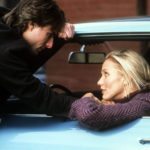