Scary. Disease is scary when you really think about it. When you think about it, there’s not a lot that can be done if an airborne illness will kill one in every 12 people on the face of the planet. With air travel, things aren’t localized the way they were back in the days of, say, The Black Plague. No, things can travel and spread. Well, think of it another way. Let’s say a friend forwards you a video on Facebook. Let’s say you share that video with five of your friends, and they with five of theirs. This is what’s called going “viral.” Get the picture? While movies like this are fiction, they’re based on real-life events. Remember the SARS scare? How about H1N1? The swine flu? None of this stuff is made up nor is it to be taken lightly. As they say in the film (“Contaigon”) “…all it took was for the right bat to meet up with the right pig.”

Mitch (Matt Damon) is expecting his wife (Gwyneth Paltrow) back from a business trip. She’s arranged a stopover in Chicago to meet up with an old flame, but by the time she gets home she’s deathly ill. There are others all around the world that are experiencing similar problems. Before long the CDC (Center for Disease Control) is involved and actively looking for a cure to this nameless, faceless epidemic. Experts are brought in and taking the lead is Dr. Ellis Cheever (Laurence Fishburne). He, along with a group of other doctors are actively looking for a cure while at the same time trying to remain unaffected themselves. As the days pass, paranoia rises. Streets vacate. Mob mentality starts to take over. Blogger Alan Krumwiede (Jude Law) proposes a holistic cure on the internet, while at the same time becoming rich. Will this be another pandemic or will the CDC manage to synthesize a cure in time to save humanity?

“Contaigon” is a gripping drama about events that can and have happened. Director Steven Soderbergh has assembled a terrific cast and in much the same vein as “Traffic”, we follow the intertwining stories that make up the film. The movie was mis-marketed as somewhat of action thriller and it’s simply not that type of movie. Rather it’s biding and skillfully-paced. There are other movies of the same genre like “Outbreak” that implore a bit more action, but “Contaigon” literally takes it one day at a time. Soderbergh uses a few familiar faces from the “Ocean’s” movies like Matt Damon and Elliott Gould, but thrown in for good measure are Oscar winners Kate Winslet and Gwyneth Paltrow, Laurence Fishburne, John Hawkes and Mario Cotillard. If you’re a fan of Steven Soderbergh’s films, and I am, this is right up there with the best of them.

Stunning. Really. Stunning. The 1.78:1 AVC HD transfer is among the best live-action transfers that I’ve seen and I’d put it right up there with “Avatar” in terms of picture quality. Granted, this isn’t nearly as dazzling or as glossed over as “Avatar” but the image is none the less stellar. If there was a bit of grain or any error in the transfer then I missed it. Soderbergh’s use of shallow and deep focus gives many of the scenes a very interesting and unique look. And, much like “Traffic” the different storylines seem to implore a different color palette for each. Detail is impressive, with grey hairs on Matt Damon and imperfections on Gwyneth Paltrow’s skin being immediately noticeable. This is a new to Blu-ray movie and it shows. This is amazing from beginning to end.

Quite the converse from the reference-quality video is the DTS HD Master Audio soundtrack. It took me a few minutes to really discover what was missing and then it hit me…a score! Ok, there is a bit of a score but most of the scenes are entirely dialogue-driven. That said, the audio quality doesn’t lend itself to a bad soundtrack. Vocals are deep and rich and penetrate the room with ease. Surrounds are used, but sparingly, the movie itself carries the action rather than the music being a collaborator. Like his previous “Solaris”, there’s not much else to say with this film in terms of a soundtrack.

Steven Soderbergh is a bit hit and miss when it comes to supplements on his films. And, unfortunately, “Contaigon” is one of the miss titles. We do get a trio of featurettes: “Contagion: How A Virus Changes The World”, “The Reality of Contagion,” and “The Contagion Detectives.” Each of these sheds a bit of light on the film and some of the production issues as well as focusing on the real-life aspects that inspired the script. There’s a digital copy, DVD and a streaming UV copy to boot. 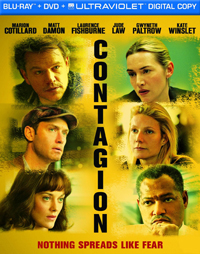