Crimes and Misdemeanors follows two stories that both take place in the same social circle. Martin Landau plays Judah Rosenthal, a prominent ophthalmologist and beloved husband and father. Judah has an issue on his hands – he no longer loves his mistress Dolores (Angelica Huston) and she will not let him break it off. Promises have been made and she plans to make him break it off with his wife. On top of that, Judah at some point had borrowed some money from a charity fund and if revealed would be in trouble for embezzlement. Dolores will absolutely destroy his world if she can not have him. Judah wrestles with what he should do and also has biblical guilt weighing down in him from his Talmudic upbringing.

Crimes and Misdemeanors was made in 1989. Woody Allen was creatively in another good period with films like Hannah and Her Sisters and Another Woman just before making this film. Crimes and Misdemeanors finds Allen effectively combines both his most serious notions with his comedic. He would cover some of the more serious material again in a later classic (Match Point) and the comedic material is very reminiscent of the melancholic comedy of Hannah and Her Sisters. For my money, this is one of Allen’s best films. One of the things I like so much about the film is that it tackles the notion of God’s presence in our lives and his nature along with how people can justify their wrongdoings. The film has some powerful moments and great performances by everybody in the film. Alan Alda is really convincing and funny as the producer. Martin Landau is incredible as the morally distraught Judah. Angelica Huston also turns in a very fine performance in the film. Woody Allen is a very accomplished director and this film has serious staying power. It was rightfully nominated for three Academy Awards that year. This will be one that I will return to again. Highly recommended.

Twilight Time provided an excellent transfer of the film using an MPEG-4 AVC codec. This film is beautifully shot by cinematographer Sven Nykvist (best known for his work with Ingmar Bergman.) the transfer has exceptional clarity and color reproduction. My guess would be that MGM/UA had done some great work on restoring this film for release and when their previous Allen films’ sales underwhelmed, they had a great transfer that was just a waiting for somebody like Twilight Time to come along and release it. This is one of the best looking of the Allen Blu-rays thus far. I am excited that Twilight Time will be releasing more in the coming months!

This DTS HD Master Audio Mono track has excellent fidelity to the original elements. This is a chatty track without too much going on in it (much less boisterous that Allen’s “early funny period”) but the dialogue is clear as day. The fairly upbeat and jazzy compositions in the film sound good as well. I didn’t detect any noticeable hiss or drop-outs of audio. No problems here whatsoever.

Crimes and Misdemeanors is one of Allen’s best-written films, evenly distributing serious drama and melancholic comedy. The film will really make the audience think long and hard about the deeper issues at play in it and will leave the viewer thinking about those issues long after the credits roll. The technical specs from Twilight Time are some of the best I have seen on an Allen release. 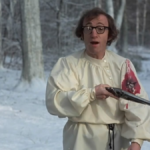 Love and Death (Blu-ray)
Next Article 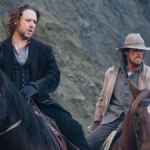