There’s an old saying that “less is more.” And when you think about it, it really works when referring to movies. This is what made “Jaws” work so well in that we never really saw the shark, namely we just felt its presence. Unfortunately “Don’t Be Afraid of the Dark” and countless other horror movies don’t take this cue and show us what we’re supposed to be afraid of in the first place. Actually, when I sit down and think about it, there are very few horror movies that have really had the intended effect on me. My all-time favorite scary movie is “The Shining” and even writing that makes me shudder. You see, that’s how you do horror! But I digress…the movie in question is “Don’t Be Afraid of the Dark”, a re-make of the 1973 film of the same name. It has Guillermo del Toro’s name attached to it, so it’s got to be good, right? Hmmm…

Alex (Guy Pearce) is an architect and his latest project has everything on the line. He’s aiming to get the house on the cover of Architectural Digest with the help of his interior designer girlfriend, Kim (Katie Holmes). Alex, in addition to sporting a haircut that would make Frankenstein proud, has just been sent his daughter, Sally (Bailee Madison). Sally is exhibiting signs of depression, so why not put her up in an old, haunted mansion? It’s not long before Sally starts to hear voices and some strange things start to happen. The house seems to be populated with these little rat-like creatures that want to be Sally’s friend, but in all actuality are after her teeth (yes, really). Of course neither Alex nor Kim believe her and it’s only until things start to spiral out of control that they think that maybe the kid is actually telling the truth. Scared yet? Yeah, me neither.

“Don’t Be Afraid of the Dark” could have been a scary movie. If Guillermo del Toro had actually been behind the camera instead of just lending his name to a production, I can see where this might have taken a turn for the morose. Instead we have these little creatures that could have been scary, but turn out to look like rabid muppets running the show. Guy Pearce is a fine actor and I’ve enjoyed his work in other films like “Memento” and “LA Confidential” but he just seems to mail it in here. I once thought Katie Holmes a competent actress and enjoyed her performance in “Wonder Boys” but my God…she’s just awful here. Maybe being “Mrs. Tom Cruise” has taken away what little talent she had left. It’s no wonder she was replaced in “The Dark Knight” with Maggie Gyllenhaal. If you’re scared of rodents then this might do a number on you. However don’t try and pay too much factual attention to what’s going on screen as the numerous plot holes and predictable ending will leave you scratching your head.

I’ll give credit where its due and the 1.85:1 AVC HD transfer is solid throughout. The film is perpetuated by darkness from beginning to end and black levels and contrast appear rock solid. Fleshtones appear to be a bit on the washed out side, but fine detail is excellent – we can see the wrinkles on Guy Pearce’s face and even some age spots on Katie Holmes. Of course, the CGI are used for the “villains”, but it appears to flow well and the end result is a nice image.

When it comes to the audio, the disc once again delivers. The very robust DTS HD Master Audio soundtrack is full of depth that I didn’t expect. Surrounds are very active with the whispers that plague the first half of the movie. There’s a very atmospheric sound stage that’s heavy on the rear and the LFE do get their fair share of time as well. Dialogue is very natural as well. It’s a shame that a mix this good is wasted on a film this bad.

There aren’t many supplements to note, the main is a 20 minute featurette about the making of the film. The only “bonus” on the Blu-ray to speak of is a concept art gallery which is, admittedly, a bit interesting. There’s an UltraViolet streaming copy included as well. 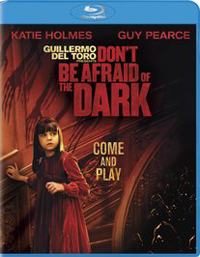