With the resounding success of “The Hangover”, I think it’s safe to assume that we’ll see more movies in the vein of said movie. I’ve already noticed DVD’s and Blu-ray’s with the oh so familiar verbiage of “From the studio that brought you ‘The Hangover'” or “From the Producer of ‘The Hangover’.” Ok, we get it – the movie was a success, but that doesn’t mean that every subsequent movie has to be a clone of it. And so we have “Due Date”, a comedy from the actual director of “The Hangover”, one of its stars (Zach Galifianakis) and Iron Man himself: Robert Downey Jr. Studio executives are pretty sharp and I’m sure it was a no brainer to take these two actors and team them up with one of the top-grossing films of 2009. Let’s face it, it would make (financial) sense. But would it deliver the laughs that “The Hangover” did?

And so we meet Peter (Robert Downey Jr.), a well-to-do architect trying to make his way from Atlanta back to Los Angeles in time for the birth of his child. No sooner does he try to get out of his Town Car than Ethan (Zach Galifianakis) comes crashing (literally) on the scene. The two end up on the same flight together, but not before Peter has his bag switched (and confiscated) and is subsequently placed on the “Do Not Fly” list. Unable to fly, both Peter and Ethan must now work together to make their way to Los Angeles. Now we’ve all seen this before; think of “Tommy Boy” or “Midnight Run.” We know that there’ll be some shenanigans along the way and sure enough, we meet a cranky, disabled vet (Danny McBride), a likeable drug dealer (Juliette Lewis) and one of Peter’s friends (Jamie Foxx) who may or may not have had an affair with his wife. Add to this that Ethan’s carrying around his father’s remains I a coffee can and I’m sure you can connect the dots.

“Due Date” had me laughing out loud a few times and, admittedly, exceeded my expectations. Robert Downey Jr. is essentially playing his “Iron Man” shtick with his short, quipped sentences and mumbling but it works for him here. Galifianakis is doing his thing as well, being annoying and taking everything way too literally. Again, though, it works. While this is certainly not “The Hangover” I could see myself watching it again and maybe even again. The supporting cast offers up some good, bit parts and I always tip my hat to whoever casts the memorable Danny McBride in a film. The film’s “R” rating isn’t too well-deserved, and while there are some adult themes (mainly drug use), it’s a lot easier to take than “The Hangover.” If you want a movie that delivers sophomoric comedy, but is actually somewhat intelligent about it, you could do a lot worse than “Due Date.”

Visually, Warner’s 2.40:1 AVC HD transfer leaves a little to be desired, but on the whole is what we’d expect from a day and date Blu-ray film. And on a side note, Warner finally seems to be moving to the AVC coded instead of sticking with their tried and true VC-1. Anyhow, it’s of little consequence. Detail is great, take the facial hair on Downey’s face as the movie progresses. We see blood and sweat stains on the shirts and even the text on Peter’s BlackBerry early on. There are a few stock shots that reek of some noise and a few of the green screen shots are a tad bit rough as well. Still, don’t let this deter you from what’s otherwise a pretty good-looking transfer.

The DTS HD Master Audio track has a few moments, but by and large this comedy is dialogue-driven. There are a few ambient effects scattered throughout and we do get a few decent songs to boot. There are a few good car scenes as wel with Ethan falling asleep at the wheel and Peter and Ethan trying to escape from the border patrol. A few directional effects highlight these scenes, but I doubt that audio is at the top of anyone’s list when a movie like this comes around.

The most disappointing part of this disc were the supplements. None of these really have any substance to them in the least. We get a few collage reels with the “action” throughout the film. A gag reel and nearly four minutes of deleted scenes are the only other thing found aside from the BD-Live enhancement and the digital copy of the movie (found on the second disc). 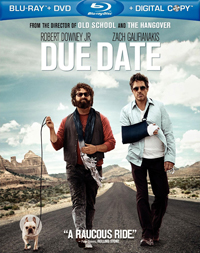