It is no secret that I am enamored with the horror films from the Eighties. One of the highlights of writing for Blu-ray Authority has been reviewing dozens of these types of films from some of the best cult labels in the business. Arrow Video and Shout!Factory have been the two most reliable labels for the off-the-wall slashers from the Eighties that I enjoy. Arrow Video’s recent release of Edge of the Axe was a welcome addition to their excellent catalogue of cult cinema titles and also shines a light on Spanish horror director Jose Ramon Larraz.

In a small town in California, a woman drives her car through a car wash. She has no idea that a masked killer awaits her with an axe. The killer smashes through the window and kills her. In the town, local college age friends Gerald Martin (Barton Faulks) and Richard Simmons (Page Mosley) have an interesting friendship. Gerald is deeply interested in technology and computers. Richard is in the business of pest elimination services. Richard is also unhappily married to an older woman that he married solely for her money. Gerald’s ability to smell comes in handy when Richard is seeking to sniff out a decaying animal. When they go to a house to track down a smell, they stumble upon a murdered body. The local sheriff Frank McIntosh (Fred Holliday) does not want to cause a stir, so he pleads with the local coroner to rule out these deaths as homicides. As the masked killer strikes again and again, shy Gerald strikes up an unlikely romance with the pretty Lillian (Christina Marie Lane.) They bond over a mutual affinity for technology. Anybody in the town is a potential suspect and there are plenty of possible motives for the killings.

This slasher was exactly the type of ludicrous film that I can take down in one quick sitting. Like many of the films that I like, the script is full of big bold ideas that don’t really correspond with any type of realism. For example, whenever Gerald or Lillian communicate with the computer, the computer seems to have limitless information from which it can pull data. It is like this computer is tapped into Google in 1988. It can also voice the results it finds. I love ideas in films where the writers just anticipate the general public will accept any technical innovation that is not actually available. If you have seen the old Sandra Bullock movie The Net, these types of technical leaps will be familiar. Here is another bold idea: Does it get much more audacious than a murder in a car wash? I can’t honestly think of a less practical way to murder somebody and get away with it. The movie had me laughing at this within five minutes of the film’s beginning. The thought that this film wanted to do to the car wash what Hitchcock did to the shower is very funny to me.

Aside from big bold ideas, the film benefits from a beautiful location. While the film was actually shot in Spain, the film looks exactly like a sleepy town in Northern California. They did an exceptional job of matching up a few shots from California with the scenery of Spain. This is the greatest trick the film achieves, because it is incredibly convincing. The acting in the film is not anything to write home about, but I liked what the cast did with the material. The death scenes in the film are not very gory, but they are fairly bloody due to a smart apparatus used to spray blood when the axe hits victims.

Arrow Video have provided a brand new 1080p HD transfer that was remastered specifically for this release in 2019 using an MPEG-4 AVC encode from a 4K scan. The film is presented in 1.85:1 aspect ratio. Here is what the booklet had to say:

Edge of the Axe / Al Filo del Hacha is presented in both English and Spanish versions in its original aspect ratio of 1.85:1 with mono audio.

The original 35mm camera negative element was scanned in 2K resolution on a 4K Scanity, graded on Digital Vision’s Nucoda Film Master and restored at R3Store Studios in London. All materials for this restoration were made available by Paul Rich and José Frade P.C.

This transfer looks very sharp. The cinematography captures a part of Spain that I didn’t know existed. It doubles for California perfectly with tall trees and pretty lakes. Fine detail is solid. The film has a good field of grain, but does not look grainy. I think that fans will be very pleased to see the level of care that Arrow put into this release.

Edge of the Axe has been given two LPCM Mono tracks – Spanish or English. Here is what the booklet had to say:

The original mono mixes were remastered from the optical negatives by Deluxe Madrid.

The audio options are both enjoyable and pretty different. I chose to listen to the English mix and was pleased with the results. As one might expect, there is some dubbing that stands out, but overall the track does a solid job of matching up voices to mouths.

Edge of the Axe is an entertaining and enjoyable slasher film with a beautiful setting and some audacious and unrealistic ideas. This is a fun popcorn movie to sit around and watch without needing to turn your brain fully on. I enjoyed watching it and think that slasher fans will find it appealing. Arrow has put a strong effort into the video transfer and the supplements. 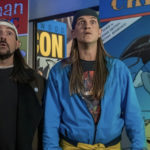 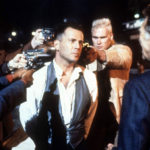