Nick Halsey (Will Ferrell) is not having the best day of his life. He was fired from his job of numerous years, only to return home to find his wife has left him. This moment is even more brutal since all of his belongings have been placed outside, his finances have been frozen, and his company car has been repossessed. Nick’s years of alcoholism lead him to this point, but he recently went six months without a drink. His sobriety is gone now however, as he turns to alcohol to numb his pain. Unable to cope with the situation, Nick begins to live on his lawn, since he is locked out his own home. While some neighbors and his AA sponsor try to help him move on, Nick seems stuck in this dark moment. Can Nick put the pain behind him and move on with his life, or will he simply succumb to the bottle and sink ever deeper into the abyss?

I am a massive Will Ferrell fan, so I was looking forward to Everything Must Go. The film is not the typical Ferrell vehicle, as it isn’t non-stop comedy and silly moments. But it is a good movie and being able to see Ferrell show a little more range than usual was most welcome. Ferrell is able to convey the weariness and hopelessness of his character to great impact, showing shades of his signature humor, but keeping it in check. I wouldn’t give him an Oscar per se, but Ferrell proves here that he is not just a slapstick performer. The film itself is rather bleak, with a fairly realistic look at alcoholism and the damage it can inflict on those involved. So not a pick me up film, but the minimalist approach and effective performances are excellent. Everything Must Go is just a rock solid movie that deals with an unpleasant topic in a grounded fashion. I found it to be well crafted in all aspect and if nothing else, is recommended to see Ferrell’s performance. So even if you normally avoid bleak cinema, Everything Must Go should be an exception and is well recommended.

Everything Must Go is presented in 2.40:1 widescreen. The film’s visuals aren’t flashy, but this transfer looks great. The level of detail is excellent, with surprising depth and subtle visual cues. The close-ups look incredible of course, but even mid-range shots show off some impressive details. The film’s warm, natural visual design is intact and while perhaps not memorable, the transfer delivers on all fronts.

The DTS HD 5.1 soundtrack is good, but doesn’t get many chances to show off. This is because the film is driven by dialogue, so it makes sense. The vocals sound clear and clean throughout, which is crucial. The surrounds get a little action from the music, which sounds great here. The front channels handle the rest of the audio elements, but that is fine since the movie sounds natural and as intended. This disc also includes English and Spanish subtitles.

In addition to audio comments from director Dan Rush and actor Michael Pena, you’ll find two behind the scenes pieces and some deleted scenes. 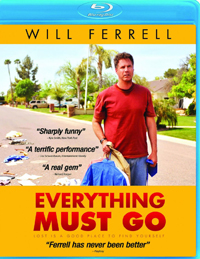