Ray Kinsella (Kevin Costner) has been inspired before, as he looked up to the baseball greats of his youth and would later become an activist in the 1960s, inspired to make a difference. These days, Ray lives a simpler life as a farmer in Iowa. He lives on the land with his wife Annie (Amy Madigan) and young daughter Karin (Gaby Hoffman), working the corn in his fields. He is by no means an expert in this craft, but he works hard and tries to make things work. As he works in the field, he hears a voice whisper to him, that if he builds it, they will come. A cryptic message to be sure, as Ray has no idea what “it” is or who “they” are, not to mention the voice doesn’t seem to belong to anyone. He consults some locals, but they begin to think he has lost his mind, hearing voices and what not. He soon understands the voice however, as he believes he is to build a baseball diamond in his corn field. His wife is reluctant, but agrees, so Ray hews a section of his crop and builds the diamond, but to his surprise, nothing happens. Until a man in a baseball uniform appears one day, a man Ray knows to be “Shoeless” Joe Jackson, a deceased and shamed former major leaguer. But is what Ray sees a real life miracle or just the visions of a madman and in either instance, what will happen to this Field of Dreams?

I am not a fan of baseball and I am not a fan of sappy melodrama in cinema, so I should hate Field of Dreams to no end. After all, this movie is all about melodrama, mostly the bond between father and son, with an emphasis on the magic of baseball. So I am not even close to the target demographic, but when all is said and done, I loved Field of Dreams. There might be a lot of baseball to be seen, it is what drives the plot after all, but the basic theme is more universal. This would be a sentimental heartstring tugger in most instances, but the filmmakers are able to do so much more. The emotional coin is in place, but it isn’t as manipulative as it could have been, so the emotion present is more natural. You don’t connect to the material because you should, you connect to it because you want to, or perhaps can’t resist. As loathed as Kevin Costner is in most circles, even his critics should give him praise here, as his performance is natural and effective. All of the tumblers fall into place for this movie, the cast, the filmmakers, and the story all line up just right. I cannot recommend Field of Dreams enough, the movie is superb and deserves to be seen, time and again.

Field of Dreams is presented in 1.85:1 anamorphic widescreen. This looks on par with the HD-DVD, which isn’t great news, but isn’t that bad either. This movie never looked great on DVD and since this new transfer comes from the same source, the old woes return. This is high definition of course, so those issues are magnified here and we’re left with a mediocre presentation. The sharpness isn’t as crisp as I would like, so detail isn’t as razor sharp as some HD releases. I still think this is a more refined image than the standard DVD, but keep in mind, increased clarity means the flaws are also more clear. As far as colors, the hues have some inconsistent moments, but look solid in most instances. I saw no real contrast concerns, as black levels are stark and don’t waver much. This is not the world of difference we wanted, but it looks better than the standard DVD, so not all is lost here.

An upgrade to a DTS HD 5.1 option is present, but not much sounds different. A few scenes have additional presence, such as the live baseball segments, but that is about it. Even so, this soundtrack is rock solid and covers all the bases. The surrounds get a decent amount of use, but this material simply doesn’t need that much juice. The music sounds great and dialogue is clean, so not much else we could ask for. And at least Universal did include a lossless soundtrack this time around. This disc also includes subtitles in English, Spanish, and French.

The extras here are plentiful, with all the goodies from the two disc Anniversary Edition still in place, so fans should be pleased. The audio commentary is with director Phil Alden Robinson and director of photography John Lindley, both of whom share a lot of information. You can tell this was a very personal project, as both men have fond memories of the shoot and a strong connection to the material. The track is a blend of technical insight and anecdotes, so it never becomes dull in the least. From Page to Stage: Field of Dreams is a fifty minute look back at the production, created for the Bravo channel. A lot of time is spent on the book the film was based on, so that opens some doors to new information. But overall, this repeats a lot of the same information found in the other features. Other featurettes include a visit to the still magical Field of Dreams, a look at the town the movie was filmed in, and a roundtable discussion about the movie and baseball, with a group of professional players and moderated by Kevin Costner. This disc also includes an original promotional featurette, some deleted scenes, and a special retrospective look at the production. 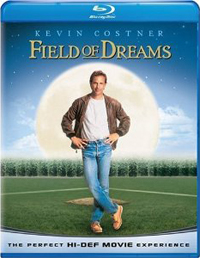