While at a wedding with his circle of friends, British bachelor Charles (Hugh Grant) meets an American woman named Carrie (Andie MacDowell). There is an instant spark between the two and they’re soon in the throes of passion. But this lustful encounter has to come to an end and Carrie leaves to return back home in the United States. But fate isn’t through with these two however, as the two meet once again after some months have passed, at a wedding of course. While the spark is still there, Carrie is now engaged, so the situation is awkward at best. The connection the two shared seemed to be more than mere sexual attraction, but timing doesn’t seem to be on their side. Charles’ friends offer him consolations and advice, some of which is more helpful than others. But Charles is destined to cross paths with Carrie again, perhaps multiple times even. So as time passes and the two continue to find themselves in each others’ lives, what will their fate turn out to be?

If romantic comedies were a monarchy, then Four Weddings and a Funeral would be in the royal family. This film launched Hugh Grant, one of the genre’s leading man fixtures into super stardom, while also ensuring that director Mike Newell would entrench himself in the genre as well. As frequent readers know, I do not consider myself a fan of romantic comedies. But this is one of the good ones and while it is over a decade old now, Four Weddings and a Funeral still holds up. The plot is simple and in truth, very little exposition or character back story is explained. This works however, as we’re thrown into the situation and the ride is a fun, wild one. Grant turns in his signature performance here, while Andie MacDowell, John Hannah, and Kirsten Scott Thomas also do some good work. The cast is also rich with talented folks in smaller roles, including Rowan Atkinson in a part that almost steals the entire show. So whether you love romantic comedies or usually avoid them like the plague, the odds are good that you’ll find a lot to like with Four Weddings and a Funeral.

Four Weddings and a Funeral is presented in 1.85:1 widescreen. This is a solid improvement over the DVD transfer, but it never quite dazzles. I was pleased with the enhanced detail however, which opens up the visuals quite a bit. The image never looks almost three dimensional like the best HD treatments, but it looks much more refined than before. The colors are natural in scope and contrast is rock solid, though a little off in a couple scenes. In the end, this is a welcome improvement that fans are going to be quite happy with.

This is a dialogue driven romantic comedy, so this DTS HD 5.1 soundtrack isn’t that memorable. The surrounds only really come to life in regard to the music, but it does sound quite good. The main focus is on vocals, which sound crisp and clear from start to finish. There isn’t much presence otherwise, but since the soundtrack handles the needs of the material well, it is hard to complain in this case. This disc also includes Spanish and French language tracks, as well as subtitles in English, Spanish, and French.

A talkative, enthusiastic commentary track features Newell, screenwriter Richard Curtis, and producer Duncan Kenworthy. This is a good session, loaded with stories from the set that should delight fans. Yes, it does involve a lot of self praise, but then again, so does almost every commentary track. This disc also includes several behind the scenes pieces, as well as some deleted scenes. 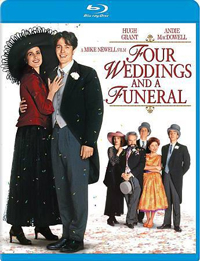