One of a myriad of biographical films, “Frida”, is well-made, but we have to ask ourselves if it is truly worthy of being watched/admired/revered? Is it? Honestly, I don’t know. Selma Hayek was nominated (and deservedly so) for a Best Actress Oscar for her part as the tortured Frida Kahlo. Going back to her Spanish roots (influences), she meshes perfectly with one of my favorite actors, Alfred Molina. The film doesn’t have a lot of action, but it does manage to convey what was going on in the life of Frida; a very tortured soul whose art inspired countless others. “Frida” chronicles her life beginning as a teenager and up to her death. The film was directed by Julie Taymor, who might be best known for her direction of the Anthony Hopkins movie “Titus” (and I don’t think that she only directs movies with a one-word title, but I could be mistaken)! If the movie is somewhat slow, it’s only because of the immense amount of detail involved. However, I think the average moviegoer will want to take a look at the film as it’s full of surprises”

We meet Frida (Selma Hayek) as she is a teenager. She’s not the noblest of souls, in fact being a Catholic, she does break one of their major rules – she has sex with a boy (in a most odd place as well), but is otherwise a “good girl”. Then, something happens, she’s on a trolley with the boy and there is a crash. Not a little crash, mind you, but something that puts her in the hospital for a while. And I’d be lying if I said one of my favorite scenes was the one where she gets her cast cut off (see the movie and I’m sure you’ll agree). From then on, though, her life is changed both physically and mentally. The sheer physical pain this woman must have been in would be unbearable to most of us. However, she learns to channel that pain into something creative; in the form of art. About this time, she marries Diego Rivera, played by Alfred Molina (a more popular artist and more widely-known than Frida). Rivera lacks morals, but is also an artist, he’s just more popular than his now wife. Though he tends to have a wandering eye, she sticks with him for some time. The two seem to complement each other, even though at times it seems they hate each other. But the way in which their relationship is shown on screen, it seems as if the two were meant for each other.

This film might be the defining point of Selma Hayek’s career, and it’s yet another in a long line of good roles for the veteran character actor, Alfred Molina. Molina, British by birth, is one of those actors who you know you’ve seen someplace before, yet you just can’t really place him. Truly the sign of a great actor, when you can’t recognize him from one role to the next (take that Harrison Ford)! “Frida” has a little bit of everything, action, romance (and there’s a few scenes in which Frida and another woman show their feelings for each other). Biographies are always interesting movie subjects, to me, but none more than the “lesser-known” ones. Sure, it’s nice to see a movie about JFK, but it’s all been said and done so much that it’s nice to see something new and fresh. The actors in this film are great and though the subject matter might be a bit boring, it’s a relatively entertaining movie that’s well made and acted.

I remember watching “Frida” on standard DVD several years ago and remember being somewhat impressed. Admittedly, I haven’t watched the film since then and right away I noticed that this Blu-ray offered a noticeable improvement over the previous standard DVD. This is to be expected, of course. The 1.85:1 AVC HD image looks a bit more film like and though the grain is still present in a few scenes, the overall image appears to be much more solid. Colors are bold in some scenes and a bit (intentionally?) muted in others. While “Frida” isn’t too memorable in terms of being a visual feast, it does look better on Blu-ray and certainly left nothing to the imagination on my end. A nice effort.

The previous Dolby Digital 5.1 track has been replaced by a DTS HD Master Audio 5.1 mix here. Though the track does seem a bit more solid, you can still only do so much with the source material. By that I mean that while this sounds good, it’s not such a night and day difference that you’ll be blown away. Sorry, but that’s the truth. There are still a lot of subtitles, so unless you’re fluent in Spanish you’ll be doing your fair share of reading. Surrounds are present, but not dominant and the center and front stage take charge here. It’s about what you’d expect from a drama film in regards to the audio.

As is the case with most all Miramax titles that are now being distributed by Lionsgate, the supplements from the two-disc standard DVD are all here. First up are a couple of commentary tracks – well, let’s make that one and a half. Director Julie Taymor is very talkative about the film. She comments on the script and the location (all in Mexico) and about everything in between. She’s obviously very proud of her work here and it shows as the commentary is very engaging. There is another “selected scenes” commentary track with Elliot Goldenthal. Though his track is more sparradic than Taymor’s, he does have some interesting things to say. I think the tracks should have been combined, but that’s just me. Additionally, there is somewhat of an EPK interview with Selma Hayek housed on this first disc. She tells of the film and how she thought it would be a small project, but obviously, it’s something that turned out to be a lot more than anyone expected.

Moving on, we find three interviews, the first is with the American Film Institute (proving that they do more than just rank every movie out there) with Taymor about the film. It’s a very candid look at the film and how it came to be. Next is Bill Moyers show as he interviews Taymor. It’s a bit more of the same, though you do learn some more about the film when watching this one. The music is covered next with the Chavela Vargas interview. She only talks in Spanish, though, so get ready to read. It was nice, though, to hear her appreciation for the film and how her contribution helped out. Three different sections are dedicated to the physical look of the film. Vision, design and look are three different featurettes devoted to how the film looked physically. There are a number of special effect shots that are unlike most we’ve become accustomed to seeing at the movies and these three cover the bases pretty well. “Portrait of an Artist” might be the only usual feature we have become used to. It has a polished look to it that is like to many others we see on DVD these days. Still, though, it’s a nice addition to an already robust disc. We get to see the actual recording session in which Selma Hayek sings the song for the CD (and evidently it took a few glasses of wine to get her into singing mode). Some facts about Frida are also shown as text-bases screens. Additionally, there are some trailers for the movie and a French Language track. 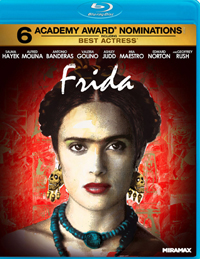