Was there some stipulation in the contracts of “Black Swan” actresses Mila Kunis and Natalie Portman that said they must do the same movie, but with different titles and stars in the same calendar year? No? Ok, well if that’s the case then I don’t really know what to think. For those that have already forgotten “No Strings Attached” the premise of that movie and “Friends with Benefits” is pretty much the same. But one movie is much better than the other. You’ll be able to tell which one it is about two sentences into the next paragraph. Now for those that don’t know (and anyone reading this should) a “friend with benefits” is a slang term in which two people in a plutonic relationship have sex with no supposed emotional bonds. This never works mainly because the woman always messes it up. Don’t hate me for saying that – it’s true. In the 80’s this was referred to as “Casual Sex” and there was a movie by the same name that starred Lea Thompson.

Dylan (Justin Timberlake) is the editor of a trendy LA magazine who’s just been offered the position of Art Director at GQ. The job is in New York. Headhunter Jamie (Mila Kunis) knows he’s the man for the job and sells him on both the new position and her town. He accepts and hits the ground running. Both Dylan and Jamie have broken it off with their previous lovers leaving these two to get to know one another. Dylan’s the new man in town and it’s not before long that the two simply decide to start having sex. They’ll still be friends, but that friendship will have “benefits.” (Get it). Things are going fine and we see plenty of skin from Mila Kunis and Justin Timberlake. But no matter how good a plan is, it never seems to end up working out like expected. Dylan takes Jamie back out to LA to meet his family where we meet his sister (Jenna Elfman) and father (Richard Jenkins). Of course Jamie overhears a conversation that ruins what these two had and they may or may not speak to one another again. Whatever will happen?

This is a romantic comedy and this genre follows a simple set of rules. I will say that, however, this movie was smart enough to make fun of that genre with a fictional movie that the characters watch (starring Peter Segal and Rashida Jones. They even poke fun at the music played during certain parts of the movie, the end movie credits and everything in between. “Friends with Benefits” is a bit on the raunchy side, but I suppose when you have a title that talks of casual sex, you can somewhat expect a more lewd film. Timberlake and Kunis are both very easy on the eyes and both do well with their respective parts. I still find it hard to believe that Kunis is the voice of Meg on “Family Guy” and I guess Timberlake has moved on from singing to acting. Still, given the choice between “Friends with Benefits” and “No Strings Attached” I’ll take this one. Look for a solid comedic performance from Woody Harrelson and a pretty funny cameo by snowboarder Shaun White as well.

The 2.40:1 AVC HD image for “Friends with Benefits” is absolutely stunning. I wasn’t expecting something blasÃ©, but the way this was shot really took advantage of the HD capacity on Blu-ray. What impressed me the most were the wider shots that had the backdrop of the city. You can see each window, definition in the buildings and the depth of field doesn’t ever get blurry. Naturally our two stars are featured prominently and we can see every wrinkle, every hair and everything in between. Flesh tones are warm and natural. There are a few scenes that seem a bit on the soft side, but everything else is so noticeably sharp that it’s like looking out a window. Look at the scene in Times Square – you can see every marquee and even read the times of the shows. This is one stunning transfer.

The DTS HD Master Audio soundtrack is consistent of that with a movie of this genre. Admittedly the movie has a pretty good selection when it comes to the songs featured. I didn’t do too much research, but I don’t think that Timberlake performed any of them, though he does give us a rendition of the 1993 Klassic (see how I used a “K” there instead of a “C”) “Jump” by Kris Kross. Surrounds are used sparingly and the meat of the mix is used for dialogue and namely the two stars dropping the “F” bomb as often as they can. Still, it’s a good mix and one that delivers.

“Friends with Benefits” comes equipped with a few select extras, the most notable of which is the commentary with director Will Glick and stars Mila Kunis and Justin Timberlake. The commentary is pretty engaging, I have to admit. Timberlake and Kunis do most of the talking, but they comment on the shoot, the trouble with filming in New York and everything in between. It’s actually not a bad listen. There’s a featurette “On the Set with ‘FWB'” which is your standard EPK and we also get a look at how the two Flash Mob scenes were set up and choreographed. A pop up trivia track is also included as are some deleted scenes and outtakes. This was the two-disc combo pack that was reviewed which also features a UV digital copy. The release is also available as a standalone Blu-ray for the exact same price. 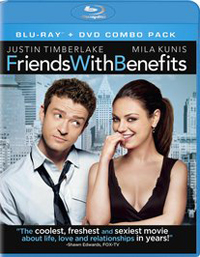