Clint Eastwood is one of those guys who you just have to love. He’s gruff and I’m pretty sure all of us wish we had a grandfather just like him. Eastwood, back in his early days, was quite the actor making a name for himself in the Sergio Leone “Spaghetti Western’s” of the mid 60’s. His career really took off when he teamed with Don Siegel as he became the embodiment of revenge in “Dirty Harry” (still quite possibly his greatest character he’s ever played). However Clint has managed to hold onto his career as an actor and director for some six decades now ? a rarity in Hollywood. He snagged an Oscar for Best Picture and Best Director in 1992 with “Unforgiven” and did it again in 2004 with “Million Dollar Baby”. Not bad for a man who started out his career as an actor. With “Gran Torino”, this was Eastwood’s first job as an actor since “Million Dollar Baby” and he’s yet again behind the camera.

Clint plays Walt Kowalski, a retired auto worker and veteran of the Korean War who lives in a rundown Detroit neighborhood. A devout Catholic, the movie opens just as he’s attending his wife’s funeral. Walt’s a bigot, he hates the Asians who have infiltrated his neighborhood and mutters snide remarks under his breath every chance he gets. The local gangs are constantly waging wars and Walt makes no bones about his disdain for them. It’s only when his next-door neighbors are in trouble that Walt steps in and helps their son, Thao (Bee Vang) by teaching him some much-needed skills and giving him the confidence to do well in life. This still doesn’t make Walt a much more likeable person though. He still prizes his ’72 Gran Torino and his dog above anything and everything else. But will the gang that’s ravaging the neighborhood get the best of Walt or will he have the last word?

It’s a crime, really, that “Gran Torino” wasn’t up for any Academy Awards this past year. A number of insiders seemed to feel that it might do what “Million Dollar Baby” did five years ago and swipe a few awards away including an Oscar for Eastwood’s acting. Alas, that didn’t happen and it was shut out of the Oscars all together. I personally felt that it was one of Eastwood’s stronger roles as an actor (if not his strongest) and one of his better directorial efforts to boot. Yes, maybe Clint was playing “Dirty Harry” at 80 but his performance was as strong as any other out there this past year and I stand behind that. The message of the film is vivid: Racism is still alive an well and it’ll be a cold day in hell before we can truly all get along. “Gran Torino” preaches this but manages to tell the story in a way in that it communicates the message and makes us care about a person who we really shouldn’t care about. Not many movies do that, this one does.

“Gran Torino” comes to Blu-ray in a 2.40:1 VC-1 HD transfer that looks pretty good. The movie is a high profile studio film, so we can be assured that Warner did everything they could to ensure it would look glorious on our widescreen TV’s. Blacks are bold and strong as is contrast. The overall palette is somewhat muted, most likely to reflect the atmosphere of the movie. Flesh tones are on target and the urban neighborhood looks as realistic as if you’re looking out the window. Detail is impressive with even the minutest things, looking like you could reach out and touch them. This is a great effort, though there are some other titles that fit the bill a bit better.

The Dolby TrueHD soundtrack is adequate, yet it’s not something the film will be remembered for. Dialogue takes front and center here and even though Eastwood’s character mainly communicates in a series of grunts, he does manage to eek out a few recognizable sentences here and there. Surrounds are fairly limited and most of the action is relegated to the front stage. Still, it’s a good effort even though this uncompressed soundtrack could have been used to a fuller extent.

As critically-acclaimed as “Gran Torino” was, the supplements are surprisingly sparse. Eastwood’s not much on commentary tracks and there’s not one present. What we do have are a trio of featurettes (the last one being a Blu-ray exclusive) that start out with “Manning the Wheel” in which the cast and crew tell us of their first car and how it’s a rite of passage. Next up is “Gran Torino: More than a Car” in which actual Gran Torino car owners tell us about their auto and the time, effort and energy involved in restoring them. “The Eastwood Way” in which Clint tells us what attracted him to the role and how it was right for him, etc. We do get some behind the scenes footage and some audition tapes as well, so it’s not all bad. There’s a link to Warner’s BD Live page as well as a digital copy of the film. 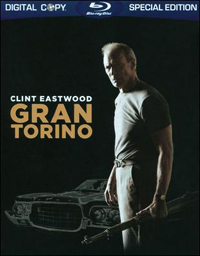