2011 might just as well be known as the year of the superhero movie. This year alone we’ve been inundated with so many, it’s hard to keep count. Here are just a few of the films: “Green Hornet”, “Captain America”, “Thor”, “X-Men: First Class” and I guess you could even throw in “Transformers: Dark of the Moon” in there as well. Let it never be said that we don’t have our choices when it comes to our superheroes. Admittedly most of the major heroes have been covered and I’m not sure where Green Lantern falls in regards to how major a hero he is/was. For those that don’t know, Green Lantern is a DC product just like Superman and Batman. Marvel heroes include Spider-Man, Iron Man and X-Men. However each hero needs a story and since I wasn’t ever too familiar with Green Lantern, this is his.

Hal Jordan (Ryan Reynolds) lost his father when he was a kid. A test pilot, Hal witnessed his father blow up in a plane crash. Ironically Hal followed in his father’s footsteps and he’s the best at what he does. He’s a bit of a loner and isn’t that determined. In fact he’s pretty much walked away from everything that’s been a challenge to him. But, as fate would have it, there are greater things in store for Hal. You see, the Green Lanterns are the guardians of the universe. There are several thousand of them and Hal’s been picked to be the latest member of this very exclusive club. With the ring, he can literally make anything he thinks of, come to life. But it so happens that a force of evil by the name of Parallax is trying to take over the universe and the Green Lanterns are the only thing stopping him (and they’re not doing a good job at it). Can Hal, a man who supposedly has no fear, stop this one force in the universe or will he walk away like he has so many times before?

While watching the supplements to “Green Lantern” I realized that there’s a pretty massive fan base out there for this particular hero. And I do realize that we can only be presented with so much during the course of a two hour movie. Still, films like “Batman Begins” and “Thor” have told similar tales and I enjoyed them, but somehow I felt a bit left out in the cold with “Green Lantern.” Much was made of the effects for this movie in that actor Ryan Reynolds’ suit was all a CGI effect. Much to the delight of every female (and probably some male) cast members, Reynolds filmed the movie shirtless. While the effects are pretty impressive, the story is a bit lacking and somewhat “been there, done that.” The movie had a budget of $200 million and evidently raked in just over that worldwide. That’s not too impressive. Undoubtedly Warner was hoping to see a lot more green with this movie, but they might need to stick to the Dark Knight for that.

“Green Lantern” comes to Blu-ray with several different options, but this Extended Cut of the film looks quite stunning. The 2.40:1 AVC HD transfer has a very film-like look and feel to it and I do have to say that the effects are top notch. We can see every ripple in Hal’s abs, every strand of hair and the CGI seem to leap off the screen. The majority of the movie is very dark and as such, there’s plenty of opportunity for errors. Contrast is a bit off in some sequences and while black levels are consistent, I saw a few errors here and there. By and large the detail is amazing and the overall clarity of the film is second to none. I would say that a few of the scenes tend to skew towards the warmer end of things, but I wasn’t bothered by it in the least. I found this to be a stunning transfer and near reference-quality material.

The DTS HD Master Audio soundtrack is, as expected, stellar. The rear channels are almost always doing something and that’s a good thing, it takes away from some of the humdrum moments that take place on screen. There are several battle/fight sequences that make full use of the channels and the LFE get involved and literally shake the room. Vocals are strong and crisp with zero distortion. I’ve read where the rear channels seemed to be a bit on the loud side, but I really didn’t think that was the case. While the movie was a bit lacking, it’s not due to this uncompressed soundtrack – it delivers.

As I mentioned earlier, there are a few different versions of this film out there. We start off with some deleted scenes and a digital comic book which is the extent of the supplements on the DVD. The Blu-ray does have a bit more to offer, notably the Maximum Movie Mode, though it’s only available on the theatrical cut of the disc. I’m a big fan of these on other Warner titles, and “Green Lantern” is no exception. Hosted by Geoff Johns, writer of the Green Lantern comic book, we get some behind the scenes footage and interviews as well as our fair share of storyboards and the visual effects. Next up we find the “Focus Points” which can be viewed individually or if you watched the Maximum Movie Mode, you’ve already seen these. “The Universe According to the Green Lantern” is a crash course in the history of the comic book from his beginnings to the present. “Ryan Reynolds Becomes the Green Lantern” shows us how Reynolds trained for the role, physically. We also get a look at the WB cartoon of the same name. This is also one of the inaugural titles for Warner’s UltraViolet program. UltraViolet is a digital rights authentication and cloud-based licensing system that allows consumers of digital home entertainment content to stream and download purchased content to multiple platforms and devices. No telling if it’ll work or not, but if you’ve purchased this Blu-ray then you’ve got a UV copy. 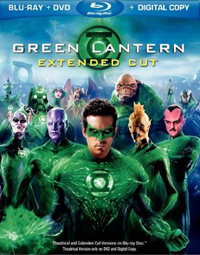