When I first saw the previews for “Grown Ups” I couldn’t help but thinking that, if he were still alive, Chris Farley would have easily been in the role played by Kevin James. Of course we’ll never know the answer to that since Farley passed away in the late 90’s. Nevertheless, “Grown Ups” is a veritable reuniting of some of Saturday Night Live’s (henceforth referred to as “SNL”) most popular and financially successful box office stars. Granted it’s a pretty common occurrence to see Rob Schneider in an Adam Sandler movie, but throw in Chris Rock and David Spade and you might actually have something. And judging by the box office that “Grown Ups” produced, $160 million and counting, the star power paid off. Of importance is the age of the actors which, I’m sure, led to this movie to begin with. These guys aren’t getting any younger and even though Chris Rock and Adam Sandler are still big box office draws, I’d say that their end is approaching. So you’ve got a group of comics nearing middle age. They’ve all got careers, wives and kids. Is a movie about that funny? Evidently so.

Adam Sandler plays Lenny Feder, one of five members of a basketball team that won the National Championship back in 1978. Their coach has just passed away and it’s as good of a reason as any to reunite with their old friends. Lenny is a powerful Hollywood agent who’s kids are so spoiled it makes his head spin. Lenny’s wife (Selma Hayek) is a clothing designer who seems about as high maintenance as they come. Eric (Kevin James) has a caring wife (Maria Bello) and family though there are some separation issues there. I won’t expand on that. Kurt (Chris Rock), is a house husband whose wife (Myra Rudolph) is not only pregnant, but the bread winner. This leaves us with Marcus (David Spade), the lone bachelor of the group who hooks up with anyone who will say yes. And then there’s Rob (Rob Schneider), who has always had an eye for the older ladies, though through previous marriages, has managed to produce two of the most beautiful daughters on the planet. They meet up, bond over some old times, watch their kids play with one another and spend a weekend at a log cabin and learn that there’s more to life than how much money you have or how many toys you have. The end.

Ok, so there’s a little more to it than that, but in a nutshell “Grown Ups” doesn’t really challenge the intellect in regards to the plot. That’s fine on occasion and I’d be lying if I said I didn’t laugh out loud on more than one occasion. I don’t know if it’s the script (written by Adam Sandler and Fred Wolf) or the direction by Dugan, but something really worked. Then again, there are a few scenes that tend to drag on and on. The aim is at the younger crowd, a crowd that might not be too familiar with this former SNL crew and the PG-13 rating is an embodiment of that. I could see this being far more raunchy (and therefore funnier), but whatever they did managed to turn a profit at the box office. “Happy Gilmore” is still by far my favorite Adam Sandler movie and his best team up with Dennis Dugan but “Grown Ups” does manage to be a bit endearing…in places. While not for everyone, this movie obviously has an audience and it’s highly unlikely we’ll see this group on screen together again.

“Grown Ups” is, of course, a new to Blu-ray release and I was expecting something that really rocked visually. Then again, this movie isn’t really meant to be a feast for the eyes (or ears) and while it looked good, it does leave a little to be desired. The 1.85:1 AVC HD transfer does look good – no doubt about it, but there seem to be a few problems along the way. The movie does take place outside, mainly during daylight hours and while this makes the colors very vibrant, it also gives way to a bit of haloing. I noticed even a bit of edge enhancement in a few scenes that wasn’t bad, but it did make me do a double take. Flesh tones do see on par with other releases like this and contrast is on the mark as well. This does look good, don’t get me wrong, but I just feel there was a little too much room for error.

Ok, now the audio is a different ball of wax. I will come out and say that I’ve never had a problem with my Blu-ray player (a PS3 Slim) or my receiver (a Denon 3808CI). That said, the movie started out fine with the included DTS HD Master Audio soundtrack, but it kept switching back to somewhat of a “concert” effect in which all of the voices seemed to produce a reverb. I finally figured out that if I paused and started my player, the track would default back to the way it was supposed to sound, but this is obviously a problem. I checked the other tracks and they all sounded fine and it did actually give me the chance to sample the Descriptive Listening Track – something I’ve never done before. I also changed to the standard DVD and listened to the Dolby Digital 5.1 track and had no problems. So I’m not sure what the deal was with this DTS HD track or if any other players had this same error, but this is what I experienced. That said, the track was pretty standard, with nothing really jumping out at me in terms of dynamic audio. Dialogue seemed about average and surrounds, when used, were used sparingly. It’s an adequate mix for a comedy and had it not been for this glitch, I’d have perhaps not spent my review worrying about pausing and starting the film.

This two disc set isn’t really any different from the stand alone Blu-ray version except for the addition of a standard DVD of the movie (which I’ll never use). Still, it does come with a fair share of supplements and we begin with a commentary by director Dennis Dugan. Dugan and longtime cohort Adam Sandler have actually done quite a few films together. Unfortunately Sandler isn’t a part of this track and he does give out some interesting tidbits about the movie, their backgrounds and some of the scenes that didn’t make the final cut. This is followed up by “Laughing is Contagious” which is essentially an outtake reel (actually a few of these are glorified outtake reels). “Riff-O-Rama” shows the guys as they ad lib another scene. “Dennis Dugan: Hands on Director” focuses on the director and the talent he brings to the film (moreover, he and Sandler have produced a lot of hit films in the past so I’m sure they want to continue that trend). “The Lost Tapes of Norm MacDonald” was supposed to play a character named “Geezer” but his role never made it to the final cut. It’s a shame too, as MacDonald is easily funnier than Rob Schneider. “The Cast of â€˜Grown Ups'” focuses on the main five gringos and the work they’ve done in their past film roles. This leads us to “Busey and the Monkey” which pretty much explains it all. This too was left out of the final cut of the film. The disc is enhanced with BD-Live, MovieIQ as well as some more outtakes and some deleted scenes along with some trailers for other Sony films (which will all be irrelevant in a year or so). 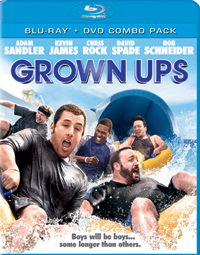