A calm, relaxing voyage on the sea, to observe some of nature’s largest and most beautiful inhabitants. That was what the tourists expected when they signed up for a whale watching tour. The tourists that board are a varied bunch, with a wide scope of race, creed, and nationality represented. The trip starts off well enough, but then a freak accident leaves them without a captain and no way to return the vessel home. But then a whaling crew spots the troubled group and offers to lend a hand. He will let the group board his ship and return them to shore. With no other real options aside from just waiting until who knows when, the group accepts and they’re soon on the whaler’s rusted vessel. But was the decision to trust the stranger a wise one, or did his offer of help also include some unexpected provisions?

I have probably seen too many horror movies at this point, but with a title like Harpoon: Whale Watching Massacre, I knew I had to add this one to the list. While it sounds like yet another lame SyFy “when nature fights back” movies, this is actually a slasher import from Iceland. This is a dark, violent journey that allows to bask in the sight of a ship loaded with unlikable people, who of course are dispatched in gruesome fashion. As far as plot, it is hard to praise Harpoon, since we hate almost all the characters, but from a “let the blood flow” perspective, its quite fun to watch. Then again, if you expected complex character arcs or multi-tiered storytelling, why watch a movie called Whale Watching Massacre, right? So no, this doesn’t break new genre ground or whatever, but it is fun and loaded with all the horror goodies we tune in to see. If you’re a genre fan, then Harpoon: Whale Watching Massacre is well worth a look, but a rental should suffice.

Harpoon: Whale Watching Massacre is presented in 2.35:1 anamorphic widescreen. This is a rock solid treatment, even though the source isn’t optimal in all respects. The detail level is impressive, much sharper than expected, though depth is a little lacking at times, due to the source stock. The colors look natural, contrast is smooth and consistent, and no errors surface that I was able to pick up on. This movie looks terrific in high definition.

This DTS HD 5.1 option has good presence at times, but isn’t consistent and suffers from volume balance issues. The film runs from being overly soft to deafeningly loud multiple times. So keep your remote handy, as you’ll have to adjust a few times to keep it all at the proper levels. The surrounds get used often, but lack the kind of punch we want, aside from a few exceptions. A horror movie can really benefit from an active surround track, but this one settles for being middle of the road. Not a bad soundtrack, but it could have been much better.

A sixteen minute behind the scenes featurette is the lone supplement here. 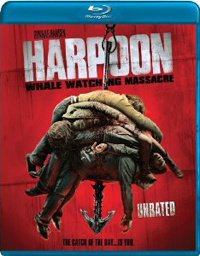