The second year of “Harry Potter” was bound to happen and especially after the first movie grossed over $320 million in the U.S. alone. Was there any doubt? The strong showing at the box office proved that Potter was no fluke and the mass market appeal wasn’t limited to pages in a book. No, as time has shown “Harry Potter” will likely go down as the most successful movie franchise of all-time, besting that of “Star Wars”, “Indiana Jones”, “Star Trek” and “James Bond” to name but a few. Who knew that a boy with a wand could be so popular? It’s hard to classify “Harry Potter and the Chamber of Secrets” as a sequel in that by the time the first movie came around, there were four of the seven books already in print. And as director Chris Columbus (who also helmed the first movie) said “The first movie opened on a Friday and we were back to work on the second one on Monday.” Now the second installment wasn’t nearly as financially profitable as the first, but by looking at the IMDB it still raked in over $260 domestically – hardly a failure by any means. Now that the kids are in their second year at Hogwarts, Harry’s beaten Voldemort again – what else could happen?

It would seem that just getting to Hogwarts would be easy, but Dobby, a house-elf is trying his darnedest to not let that happen. There’s danger at Hogwarts and Harry Potter (Daniel Radcliffe) must not go else his life might be in danger. Well, Harry’s a determined boy and after he and Ron (Rupert Grint) miss the Hogwarts Express (the magical train that takes them to Hogwarts), they climb inside Ron’s father’s flying Ford and head there that way. Only in a world of witches and wizards does a flying Ford make any sense! Once at Hogwarts and having survived the wrath of the Whomping Willow (a tree that nearly pummels them to death) the school year can truly start. We meet a slew of new characters in this film including Ginny (Bonnie Wright), Ron’s younger sister and what will become a standing joke, a new Defense Against the Dark Arts teacher played by Kenneth Branagh. The main focus, as the title suggests, is the mysterious Chamber of Secrets. Students are becoming petrified with fear, we meet a young Voldemort who goes by the name Tom Riddle and it’s up to Harry, Ron and Hermione to get to the bottom of things else the Chamber of Secrets might spell disaster for everyone!

Having read all of the books, it’s hard to adequately summarize the movie because there’s so much that’s there, yet not at the same time. “Harry Potter and the Chamber of Secrets” does actually contain a number of references that will come into play later on down the line, but I won’t spoil it for anyone who hasn’t read the series of books. Yes, there is more action and there is a bit more humor and it’s clear that the cast gelled during the first production. Granted, the “Harry Potter” films haven’t actually produced the best acting out there, but when you consider that the kids had zero acting experience (and you consider their ages), they did alright. Looking back, this was probably my least favorite Potter film but I still hold it in high regard. This was the last film that Chris Columbus directed, and from this point forward the series had several other men behind the camera. It’s also noteworthy that this film came out nearly a year to the day after the first feature and it would be 18 months until the next installment “Harry Potter and the Prisoner of Azkaban” – widely regarded as the best in the series to date. “Harry Potter and the Chamber of Secrets” delivers more of the same that the first installment did and fans of the movies and books will be happy that there’s more to the film (13 minutes more to be exact) after all these years.

As with the first installment, “Harry Potter and the Chamber of Secrets” is shown in a 2.40:1 VC-1 HD transfer that leaves little to the imagination. The film looks razor sharp, color balance is very strong and contrast is amazing. Don’t believe me? Take a look at Dobby, the CGI character who we see throughout the movie. Look at the detail in his face, the hairs in his ears and skin. The CGI effects are a bit better in this film than the first, like the howler envelope and the use of Dobby. Splendid! This looked fairly similar to the first Blu-ray edition in terms of quality but fans will enjoy the additional footage in the extended version which looks great as well.

Audio wise Warner has given us a DTS HD Master Audio track that more than suffices. Dialogue is very crisp and clean and the most noticeable difference between the first and second films is that Harry, Ron and Draco’s voices have all dropped about three octaves. In some scenes you can hear the “crack” of their voices. Naturally when working with children on the cusp of becoming adults this will happen, but it’s clear to hear in some scenes in the audio. Surrounds are also used to great effect, notably during the final scene with the serpent. As always, “Harry Potter” has a strong soundtrack to accompany the action on screen and again, fans will appreciate this uncompressed track.

This is the second of the “Harry Potter” Ultimate Editions, there will be more presumably all the way through the eighth film. However the first two are all we have right now, so let’s dive in with the supplements. The most notable difference is that this contains the Extended version of the film with 13 minutes more than the theatrical version. If memory serves, this was the longest movie in the series so with the addition of 13 more minutes, you get your money’s worth. Like the first Ultimate Edition, we get a picture-in-picture commentary with David Heyman and director Chris Columbus who offer their insights on the film. But if you watch all of the supplements, these become a bit redundant. Also included on the first disc are several deleted scenes, though if you look closely you’ll see them inserted in the Extended version of the film. The second disc is like the second disc of the first Ultimate Edition, more of a DVD-ROM like interface with facts and figures about the movie. I believe these were included with the original standard DVD’s of Potter films. The third disc contains the new supplements and we’re greeted with “Part II” of “The Wizarding World of Harry Potter”. This installment is aptly-titled “Characters” and that’s about as appropriate as can be. We meet a slew of new characters in this film and some we’ll see again and others – maybe not. This hour long documentary takes a look at the different characters in the series and gives us some insight as to their past, present and in some cases, future. Also included is a 1 minute look at “The Chamber of Secrets” which is essentially an EPK that came out at the time of the film. We are greeted with some theatrical trailers as well as some teaser trailers to boot. Like the first Ultimate Edition, we also have a full color book with focus on the main characters (and how they changed throughout the six films to date), two collectable trading cards (Severus Snape and Hagrid) as well as a digital copy of the movie. True Potter fans will pick this up without a second thought. 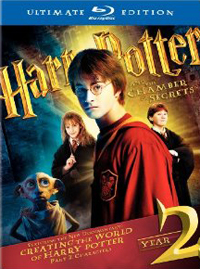