It’s amazing how much a boss/manager/supervisor can really affect your day to day life. Just like having that teacher in college that everyone wants, a boss can really make or break your career. It’s natural, I think, to naturally despise your boss though I’m sure many would disagree with me. I’ve never been the kiss ass type, telling my boss I like his tie or her dress (I’ve had plenty of bosses), rather I just do my thing and let my actions speak for themselves. As many of you guessed, I don’t do DVD Authority as my full-time job and most likely never will. It’s cool, though, I’m ok with it. Unfortunately I have to work a day job to pay the bills and, yes, I’ve had several bosses. Granted mine haven’t been to the extreme that they are in “Horrible Bosses” and if they were I’d just quit and get another job (life’s too short to be unhappy is what I say). Then again if my boss was Jennifer Aniston and was sexually harassing me – would it really be so bad? Enough about that. Let’s delve into the plot a bit more.

The story focuses on three characters: Nick (Jason Bateman), Dale (Charlie Day) and Kurt (Jason Sudeikis). Nick’s been taking crap from his boss, Dave Harken (Kevin Spacey), for eight years in the hopes of getting that big promotion. But when the time comes Dave gives the promotion to himself. Dale is being sexually harassed by his boss, Dr. Julia Harris (Jennifer Aniston). Dale is newly-engaged and Julia won’t rest until she’s had her way with him. Finally we meet Kurt whose friend and mentor (Donald Sutherland) has just passed away leaving his drug/sex-addicted son (Colin Farrell) in charge. The trio eventually decide that since they can’t quit their jobs, they’ll do the next best thing – kill their bosses. Having no prior experience, they head to a seedy area of town where they meet Motherfucka Jones (Jamie Foxx) who acts as a consultant for their eventual murders. This leads us to believe that everything will go off without a hitch, right? Right…

When watching “Horrible Bosses” I was reminded of two movies that this one parallels. One of my favorite movies “Office Space” and the other a bit of a takeoff on “The Hangover.” Granted this movie is a bit darker than both of those, but it’s got plenty of comedy interjected in as well. There’s no denying that pretty much everyone can relate to this movie and if they can’t, you probably shouldn’t hang out with these people any more. The performances are well above average with Colin Farrell taking the cake as not only the most unrecognizable but for the best performance. Spacey is always good with his deadpan yet sinister ways and Jennifer Aniston is obviously very proud of her body (and she should be) as she’s shown in several provocative situations. This movie might not be for everyone, but odds are that if you’re among the working class – you’ll be able to relate.

“Horrible Bosses” is shown in a 2.40:1 AVC HD transfer that looks delightfully pleasing to the eye. Granted this is a new release by Warner (New Line) so we’d expect nothing less. The overall sharpness of the picture is consistent with a movie that’s new to the format and I found a few scenes a bit on the soft side, but nothing that really stood out as being bad. Colors are on the warmer side, just look at Jennifer Aniston’s all-over tan in some of the scenes. Detail is above average and we can see each strand of Colin Farrell’s comb over. Beautiful.

By and large, comedies aren’t really that well-known for their soundtracks and “Horrible Bosses” isn’t one to break that mold. Yes, there are some moments in which the surrounds engage and the LFE come into play, but this is a solid, though somewhat average mix. The front stage takes the majority of the burden and though dialogue is very clear, there’s not a lot that really stands out. Quite simply, this is a very strong and well-defined mix, though I’m sure in about a month I won’t remember anything about it. This DTS HD Master Audio soundtrack is middle-of-the-road, for sure.

I would have assumed that a movie that did as well at the box office ($120 million in the US alone) would have a bit more to offer. Unfortunately this isn’t the case and though we do get both the theatrical cut and an unrated extended version that runs 8 minutes longer, there’s just some fluff as supplements. We get a few deleted scenes as well as some promotional fodder like “My Least Favorite Career” which has the cast telling us stories of their own boss encounters. “Surviving a Horrible Boss” is best left unwatched and “Being Mean is So Much Fun” in which Kevin Spacey flashes back to an earlier role in “Swimming with Sharks.” Finally we get “The Making of the Soundtrack” – yes, really. The disc is BD Live enabled and this is also one of the inaugural Warner UltraViolet releases and we also get a Digital Copy of the film. 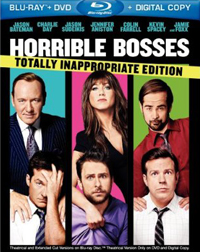