James Franco. Heard of him, have you? 2010 has been a banner year for Mr. Franco and here’s a brief rundown on a few of the things that he’s done. He’s gotten critical acclaim for two movie roles, one for this Blu-ray “Howl” and the other as an ill-fated climber in “127 Hours.” He’s had a book of poetry published, has appeared in over 40 episodes of “General Hospital” (yes, really) and will be co-hosting the Oscars next spring. Oh and he had a book of poetry published. Ok James, we get it…you’re talented! For the few that don’t know who he is, just think of the “Spider-Man” films. Yep, he was that one. But I digress. I returned from vacation last week to find a copy of “Howl” on Blu-ray waiting for me. To be honest I’d never heard of the movie, but my eyebrow raised when I saw the cast. Allen Ginsberg? The name rang a bell, but still really no dice in the recognition department. And then…it clicked! Ok, I knew being a fan of the band They Might be Giants would eventually pay off! The beat generation. Ok, yeah, I’m getting this now. Let’s roll, baby!

Franco plays poet Allen Ginsberg whose controversial poem Howl was classified as genius or obscene depending on who you asked. In fact, you can read it in its entirety here. The poem depicted lewd sexual acts, drugs and other things that we don’t think twice about these days but in the late 50’s it was certainly a hot topic. The movie has three parts to it with the first being Ginsberg reading the poem itself to an audience in a San Francisco club. Then there’s the trial itself where publisher Lawrence Ferlinghetti, owner of the City Lights Bookstore, is being put through the ringer and lastly there’s an interview with Ginsberg (Franco) himself as he tells us the events in his life, what influenced him and society’s reaction to the poem. It’s more like three movies in one, but they’re loosely tied to one another in a way that makes it work. There are also some amazing animation sequences that further tie these together.

Movies like “Howl” are the reason I still keep DVD Authority alive. Granted I like getting free movies but it also affords me the opportunity to see films I’d likewise never think to take a look at. I won’t say that each and every movie like this will be hailed as the greatest movie of all-time because they’re not. But I do like seeing some more independent films, it just so happens that this one has some pretty mainstream talent in the cast. There are so many people, places and events that make the world what it is and it’s amazing to see how something as simple as the passage of time can turn a hot topic into something rather commonplace. “Howl” isn’t really a biography on Ginsberg, but rather an insight into that time in his life where he was creating and how the world around him reacted to it. Franco is once again stunning in the lead role and get used to him folks, he’ll be around a while. Good.

The Blu-ray is shown in a 1.85:1 AVC HD transfer that’s good in parts and a bit dicey in others. “Howl” starts off in a gorgeous black and white (I’d thought the entire movie might be in black and white), but gives way to color a few minutes in. The aforementioned animation sequences are stunning visually and really show the creativeness of Ginsberg as he embarks on his career as a poet. Though visually stunning, there’s a bit of compression and a tiny bit of banding in some of these, but it’s nothing really to get worked up about. Detail is on par with most other Blu-rays and for a film of this budget, I was very impressed with the way it looked on disc.

Unfortunately the DTS HD Master Audio soundtrack isn’t anything too special. There are movies that rely on surround sound and there are movies like this that are pretty much all talk. The audio is a bit soft in parts, so much so that I had to adjust my receiver a few times to hear everything that was being said. I realize that this isn’t going to be one of those films where the audio takes over, but it’s still possible to have a strong base in dialogue. Then again Franco as Ginsberg tended to kind of mumble in his interviews, so it might not all be a fault of the audio mix. Still, it’s not all bad and for those that can find the right balance, it’s enjoyable to listen to.

There are enough supplements on this Blu-ray that make the disc a worthy purchase. We first start off with a commentary track by producers Rob Epstein and Jeffrey Friedman who are joined by actor James Franco. Franco takes the lead and delivers a very in-depth track with the producers agreeing with pretty much everything he says. “Holy! Holy! Holy! The Making of ‘Howl'” is a 40 minute featurette as Epstein and Friedman tell us about the origins of the film and how they got such a big name cast to take part in the film. We also get some interview footage done by the director as his research for the film was starting. A very interesting feature is we get to see the real Allen Ginsberg read his poem “Howl” in front of an audience in 1995. Not to be outdone, the next feature is James Franco reading the same poem, though it’s an audio version. The Blu-ray has two other features that the DVD doesn’t, first up is Ginsberg reading “Sunflower Sutra” and “Pull My Daisy”, two more of his works. And lastly we get a Q & A session with directors/producers Rob Epstein and Jeffrey Friedman as they’re interviewed at the Provincetown Film Festival. 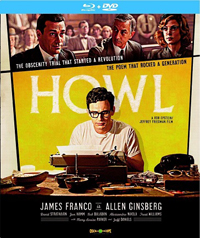