I’ve become more than a little dismissive with horror movies lately. They just don’t cut if for me. There are many issues I have with them, especially with the found footage angle, but more to the point, they simply don’t scare me. Instead, I’m usually eagerly awaiting the end credits due to sheer boredom. A few months ago when It Follows arrived in theaters, I heard nothing but praise. Not just from the audience, but critics seemed to adore this film. That still didn’t push me enough to pursue this film while it was in theaters. Now, with it being on disc, I decided I’d give it a shot. As it turns out, the film is quite enjoyable, offering a nice, scaled back approach absent from a lot of modern horror films. I won’t say it’s particularly frightening, but it still left an impression on me. I don’t think it quite deserves the endless praise it received, but it was a mostly enjoyable film that’s deliberately paced.

Jay Height (Maika Monroe) is an easygoing college student who is infected with an unknown entity after it’s passed to her through a sexual encounter. Little is known about it other than it can be passed along during sex. This pretty much sets the stage. We see Jay continuing as she and her friends help her stop this supernatural force before it consumers her. There’s an obvious influence here of earlier films, especially John Carpenter. I appreciate a more subtle approach, moving away from gore and obvious scares into something more down to earth. I won’t say this is one of the scariest horror films I’ve ever seen, but it does have a few moments of genuine scares. There’s also the lingering feeling that something is about to happen at any moment. The year is never directly addressed, but we don’t see a lot of cell phone usage or other signs of modern technology or social media. Having said that, there are still more modern vehicles shown, so it could take place somewhere in the late 90’s or early 2000’s. Regardless, this touch only benefits the film. Another fresh twist is that there’s not an actual killer. Indeed, the entity is the enemy here, but there aren’t any masked killers lurking in the shadows. As much as I love the old slasher films, this did make for a breath of fresh air when compared to a lot of the horror films we’ve been seeing more recently. So while I don’t feel it’s some modern classic, I do think It follows is a worthy horror film that’s at least worth renting.

The transfer was never less than satisfying. The image is AVC encoded with a 2.40:1 ratio. Clearly, a low budget film, it still looks great in HD. I enjoyed the look of the film and the setting. We see a lot of nice details, especially early on. Colors were always accurate with no issues to speak of. The print displayed no flaws either. Fans will be pleased.

While not overly aggressive, the DTS HD track still serves the film nicely. I read on some message boards that some thought the track was toned down a bit than what was heard in theaters. Since I didn’t see it in theaters, I can’t comment, but it sounded fine to me. During some of the louder moments, nothing here felt subtle at all. Vocals were always fine, but I did have to turn it up a few times to make sure I could hear it all. Overall, I feel pleased with this track.

While I don’t think it was quite as good as all the positive buzz surrounding it, there’s still enough to enjoy in this film. I can’t see myself watching it multiple times, but it’s worth seeing at least once. The commentary track was good, but the disc is otherwise lacking in strong features. For already established fans, you will know if you want to purchase it or not. For all other, I’d advise a rental first. 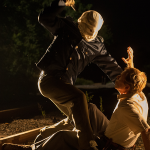 The Town That Dreaded Sundown (Blu-ray)
Next Article 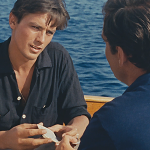