Juno (Ellen Page) is sixteen and pregnant, thanks to having sex while bored or so she claims, despite the fact that The Blair Witch Project was on television at the time. As the reality of the situation begins to sink in, Juno starts to tell those around her about her current condition. Her best friend tries to be supportive, the baby’s father Bleeker (Michael Cera) is a laid back kind of shock, while Juno’s parents are disappointed, but vow to help her through the process. Juno decides to have the baby, then adopt it out, but she wants to find just the right parents. After looking through classified ads, she finds a well to do couple that shows promise and soon, an agreement is reached. As time passes and Juno copes with the trials and tribulations around her, she discovers not all is what it seems and even she might not be sure about she wants, for the baby or herself.

This was one of the critical gems of 2007, but it didn’t just connect with critics, as Juno also raked in over one hundred million at the box office. I had a blast with the movie, I saw it in theaters and wound up going back several times, to take friends and family to see it as well. I wouldn’t call Juno a masterpiece, but it is a wonderful movie and one that stays with you, keeping your spirits up even after the credits have rolled. The writing is a little self indulgent at times, as no one talks like this in real life, but there is honesty and depth here too. The characters are natural and well developed, then bolstered by superb casting and a parade of excellent turns that never cease to impress. Ellen Page is memorable, but J.K. Simmons, Allison Janney, Jason Bateman, and Jennifer Garner are also terrific. I would recommend Juno to anyone, as the story is simple, but sharp, with great performances and the experience is just one you can’t miss.

Juno is presented in 1.85:1 anamorphic widescreen. The movie looks good, but this transfer isn’t going to floor anyone used to pristine, three dimensional visuals. I noticed minor noise more than expected, but colors look bright and natural, while contrast is smooth and accurate. The image shows solid detail, much more clarity than the DVD of course, but doesn’t offer the pop we’ve come to expect from high definition. In other words, the movie has an “indie” texture, but still looks quite good. Not going to win any awards for the transfer, but the movie looks fine.

The audio is solid, but even this lossless DTS HD 5.1 option can only do so much here. I call a lot of movies “dialogue driven,” but few are as much as Juno. The vocals are the main element from start to finish, with a handful of instances where the music takes over and soaks in the spotlight. The music does sound good, especially in scenes where it takes the focus, but aside from that, the surrounds don’t see much action. The dialogue rules the roost and since it sounds flawless, this soundtrack gets a pass, but don’t expect too much here. This disc also includes Spanish and French language tracks, as well as subtitles in English and Spanish.

The main attraction here is audio comments from director Jason Reitman and writer Diablo Cody, who keep a nice balance between technical and anecdotal elements. Cody talks about the writing process and how some of her own life made it in, while Reitman covers the technical aspects of the production. About twenty minutes of deleted scenes is also here, all well worth a look. Not stuff I’d want to have re-inserted, but still material I am glad to have seen. A quarter of featurettes don’t amount to much, around half an hour of EPK interviews and such. I wanted a little more depth, but this is all we have. This disc also includes a gag reel, screen tests, a music video with the cast & crew, and two Fox Movie Channel promotional featurettes. A second disc offers a standard resolution digital copy of Juno, which you can transfer to your iPod or whatever portable device you prefer. 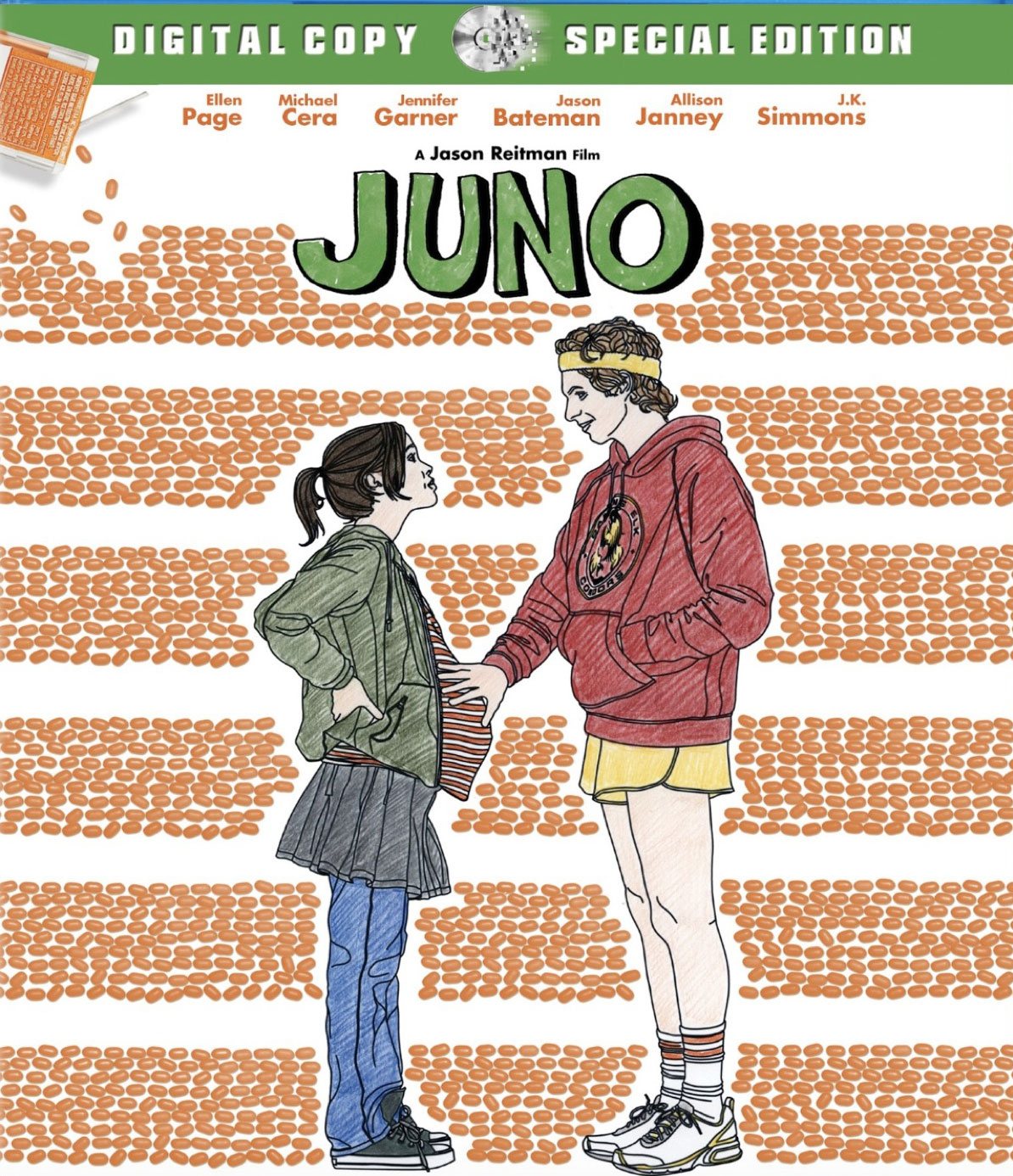