Alex Cross is author James Patterson’s darling. The star of some 20+ novels, the character finally found his way to the big screen in 1997. The novel, Kiss the Girls, was actually the second of Patterson’s with the first being Along Came a Spider (which saw its way to the screen in 2001). Though the books/movies aren’t really in any sort of chronological order, each stands on its own. Think of it like the Indiana Jones films. Having said that, readers of the novels know that Alex Cross is a Washington D.C.-based forensic psychologist with a habit of getting himself into a bit of trouble. He’s also got a really good record of catching whatever bad guy is up to no good.  Morgan Freeman was a perfect choice to play the even-keeled Cross and the film gave us a look at a then rising star by the name of Ashley Judd. The film gave her a launching pad for some other action films like Double Jeopardy. At any rate, let’s see what this initial film adaptation had in store. It’s been nearly twenty years since it hit the screen, so has time been good or bad to Mr. Cross?

Washington D.C. police detective and forensic psychologist, Alex Cross (Morgan Freeman) has written a best selling nonfiction crime book and as a result he has attained a certain notoriety. But, his profession invades his personal life when his niece, Naomi (Gena Revera), is abducted. She is the victim of a serial murderer, kidnapper and rapist named Cassanova who has been snatching attractive, young and talented women. Out of concern for his niece, Alex ventures to North Carolina to assist in apprehending Cassanova and solving the disappearances of the women who have been taken. When he first arrives the local police are a little standoffish about having such an acclaimed police man on their turf. But, their resistance drops when they realize that his niece is one of the victims. In addition to local police resistance, Alex is greeted by the news that one of the girls abducted has been found murdered. He is relieved that the young woman is not his niece, but her death leads him to a revelation never grasped by the cops in Durham. This is that Cassanova’s first choice is not to kill his victims. Rather, he means to accumulate them in what can best be described as a collection.

It’s hard to believe it’s been nearly two decades since Kiss the Girls first came to theaters. It was a modest success at the box office nearly doubling its $27 million budget. This obviously paved the way for its 2001 sequel – Along Came a Spider. Audiences would have to wait nearly a dozen more years for the next Alex Cross film entitled, cleverly-enough, Alex Cross (played by Tyler Perry as opposed to Morgan Freeman). Looking back on the film now, I still found it taut and intense and a showcase for what made Ashley Judd a star…for a few years. Judd and Freeman teamed up again in 2002’s High Crimes so there was clearly some on-screen chemistry there. For those that haven’t seen it, Kiss the Girls actually sports a fairly robust cast of recognizable names. I feel that the movie(s) are a bit more tailored to fans of Patterson’s books, but nevertheless. Die hard fans have been waiting for this for quite some time and will probably add it to their collection without a second thought, and for the rest of us it’s a good movie to rent.

I remember seeing this in the theater and I remember watching it again a few years later when it came to DVD, but aside from that I’ve not seen this in over 15 years. Warner’s (ok, Paramount’s) catalog titles do seem to look good when they finally hit Blu-ray, though they don’t take the time and care that other studios (Criterion) does with their releases. Having said that, the 2.40:1 AVC HD image does look pretty good. It appears to be a cleaned up version of the DVD transfer, though I did notice some persistent grain throughout the film. Sharpness and overall clarity seem to be improved, contrast and black levels (this is a very dark movie) work well off one another as well. The flesh tones seem a bit muted, but the lighting and the way the film was shot are a bit muted to begin with. If you’ve ever seen Se7en, that seems to be the look they were going for.

The original Dolby Digital 5.1 sound mix has been upgraded to a DTS HD Master Audio one and it seems to get the job done. I’ve often wondered what the process is to “convert” one sound format to another. I figure if a soundtrack has five different channels and a LFE, there has to be some software out there that does a conversion. I don’t know though – I’m rambling.  The mix has several moments of pure action though the movie is, largely, dialogue-driven. Morgan Freeman’s deep and calming voice resonates, surrounds offer some extra support while the front stage handles the majority of the information. It’s a nice mix, but it’s not something that will shake your room.

Here’s hoping that you enjoy the movie, because this disc is lacking any supplemental materials.

Nearly twenty years later, the first Alex Cross movie to hit the screen still delivers. I have no idea why it’s taken this long for this (and its sequel) to hit Blu-ray, but even with improved audio and video, this featureless disc is going to be a hard sell. 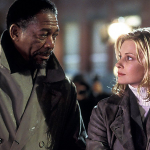 Along Came a Spider (Blu-ray)
Next Article 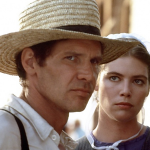