Tom Cruise. The actor’s name used to be synonymous with an instant $100 million dollar domestic gross. Not that his star has faded all that much, but even the mightiest of them all has seen a decline in recent years. Cruise has tried to diversify himself over the past years and from some of his “art house” films of the late 90’s (namely “Magnolia” and “Eyes Wide Shut”) has somewhat gone the other way with the “Mission: Impossible” series as well as his collaborations with Steven Spielberg on films like “Minority Report” and “War of the Worlds.” However with his latest effort, “Knight and Day”, the movie didn’t work out as either Fox nor Cruise planned and it was chalked up to “mis-marketing.” Well, whatever the reason it is a Tom Cruise movie and he reunites with his “Vanilla Sky” co-star Cameron Diaz. Is the magic still there or is “Knight and Day” something that should be skipped?

Roy (Tom Cruise) is a rouge secret agent and “bumps” into June (Cameron Diaz) at the Wichita airport. June restores classic cars and evidently the pickings in Kansas are the best in the country. Through a series of events, June is eventually let on a nearly empty airplane and before long, everyone (including the pilots) are dead. But as luck or fate would have it, Roy manages to land the plane in a field and the two are on the run. June learns via Roy that the government is after him, though she’s not sure is he’s the good guy or the bad guy. You see, Simon Feck (Paul Dano), has developed a perpetual battery which is evidently one of the greatest inventions of all-time. There’s a big pricetag for it and Roy must keep it in his possession (there’s always a foreign buyer for this stuff, isn’t there). Can Roy and June manage to elude a seemingly never-ending entourage of bad guys with machine guns or will the zephyr (the energy source) end up in the wrong hands?

Admittedly I didn’t pay too much attention to the advertising campaign, but I will say that this is unlike any Tom Cruise movie I’ve seen. The closest thing I could liken this to is one of the later “Lethal Weapon” movies. There’s action, comedy and a million opportunities for Cruise to flash his multi-million dollar smile. Diaz does what she does best, plays the ditzy blonde and there’s chemistry between the two – no denying that. If you can suspend your disbelief for a couple of hours then you’ll probably enjoy the movie. I wouldn’t put it up there with some of Cruise’s better movies, but on the surface I was entertained and isn’t that the point?

The 2.40:1 AVC HD transfer is superb, no denying that. Colors are bright and pop on the screen. Detail is amazing and we can actually see signs of, *gasp*, aging in Tom Cruise. Admittedly for a man 18 months shy of turning 50, the guy does look pretty good. The locales vary from the streets of Boston to the Alps in Austria to a tropical island. Contrast is on the mark and though some scenes are a bit on the toasty side, it’s still a very good-looking transfer from Fox.

The DTS HD Master Audio soundtrack doesn’t disappoint, either. I’d put this up there with a James Bond movie in terms of bullets fired and some of the scenes really make use of the surround speakers. The LFE are highly involved as well. Dialogue is rich and robust as we might expect. Though this movie somewhat falls into the Comedy genre, don’t be fooled as this soundtrack is right up there with some of the better action movies. “Knight and Day” does deliver on a technical level, as I figured it would.

Fox has a few variations of this film and this one reviewed was the 3 Disc Blu-ray. As we delve into the supplements we get the theatrical version of the film (there is a extended edition available) along with a slew of featurettes. We start off with “Wilder Knights and Crazier Days” which is essentially an EPK for the movie. We get some behind the scenes interviews with Cruise and Diaz as we do on “Boston Days and Spanish Knights”, though this one focuses more on the locations involved with the film. There’s a Black Eyed Peas music video “Someday” featuring Cruise as well as a couple viral videos “Soccer” and “Kick.” We get the original theatrical trailer as well as some BD Live extras. The second disc is the standard DVD of the movie and the third being a digital copy for your portable device. 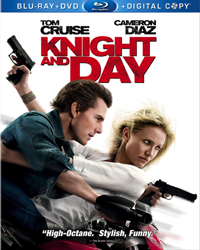