To overcome incredible odds to become the Dragon Warrior, so now he’s living the good life. Surrounded by friends and fans, he is finally the hero he always dreamed of becoming. But that idyllic situation is shattered when his father Mr. Ping reveals that he isn’t Po’s biological parent. This opens up a flood of memories from Po’s past, as he tries to put together the pieces of his fractured youth. As Po searches for answers about his forgotten past, he is also confronted by a problem in the present, as the evil peacock Shen is up no good. Shen has developed a weapon of immense power, a tool that could be used to not only defeat kung fu masters, but stamp up the martial arts for good. With the help of his fellow kung fu masters, Po must put an end to Shen’s plot, but he can do so while distracted by his own personal issues?

A sequel to “Kung Fu Panda” was inevitable of course, given the box office success of the original, but does this sequel deliver in terms of entertainment? Given that the original was an assault of slapstick and action scenes, I expected the sequel to attempt to one up those elements. Instead, Kung Fu Panda 2 tones down those ingredients, focusing on Po’s character and giving the story more heart. So yes, this does mean that the pace is slower at times, but even a child’s attention span will remain dialed in. And while the action as non stop as before, when it does appear, it is done right. The set pieces are impressive, making the most of the action to really deliver in those moments. So we’re given a solid story, decent development on the central character, effective action set pieces, and of course, some wonderful humor. Kung Fu Panda 2 drops some of the wackiness to be a better overall movie, one that kids will still love, but adults will enjoy much more than the original. And with remarkable technical merits and solid extras, this is one fans will want to add to their personal collections.

“Kung Fu Panda 2” is presented in 2.35:1 widescreen. As expected, the movie looks downright incredible here. The visuals just shine, with vibrant colors and impeccable depth. The animation is remarkable, with subtle touches that leap out thanks to the high definition format. I saw no flaws whatsoever in this visual presentation, this is simply one of the movies you’d pop in if you wanted to show off your home theater.

A Dolby TrueHD 7.1 soundtrack is on deck, which sounds excellent. The audio is just as it should be, upbeat and fun, with a lot of punch. The action scenes make the best use the surrounds of course, with a lot of presence to soak in, but there is great detail in even the calmest sequence. This depth really makes the movie come to life, even if it isn’t the kind of audio you notice at first, just subtle and effective. The score also sounds great here, with quite a lively presence. This release also includes French and Spanish language tracks, as well as subtitles in English, Spanish, and French.

Secrets of the Masters is a new animated short that is sure to interest fans, as it focuses on some of the movie’s lower profile characters. The piece isn’t on the same level as the feature of course, but it still solid fun for younger viewers. You can also check out audio comments from a number of crew members, including some picture-in-picture elements. Animation Inspiration is an interactive guide to still photos and video clips, while a trivia track rounds out those type of elements. This release also includes deleted scenes, two interactive games, and several promotional featurettes. This edition also includes a DVD version of the movie, as well as a digital copy for portable devices. 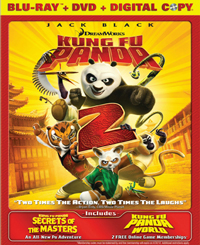