The world has been overtaken by the living dead, as zombies have driven the human race into isolated safe areas, but even now, social divisions remain. For those who had wealth before the living dead infestation, Fiddler’s Green is a haven of luxury and comfort. Kaufman (Dennis Hopper) runs the beautiful skyscraper and for his tenants, he makes sure their needs and wants are always accommodated. In order to provide food, water, and luxuries for his tenants, Kaufman hires survivors outside of his social circle, who then venture into the unsafe areas to retrieve provisions. But one of his workers, Cholo (John Leguizamo) has plans to rise above his meager social level, with dreams of his own apartment in Fiddler’s Green. But all the while, the zombies haven’t forgotten the safe area and as they march toward it, almost certain doom looms. Can Kaufman manage both an uprising from within his own ranks, not to mention the threat of the living dead?

This is one of those movies that would seem much better, if only you didn’t know who was responsible. As a zombie movie of its own merits, Land of the Dead isn’t bad at all. But with George A. Romero at the helm, the expectations rise and as a Romero zombie movie, Land of the Dead disappoints. Romero supplies memorable zombies, ample bloodshed, and his usual social/political edge, but things just never come together that well. On the positive side, the production values are superb and the cast is solid, so Land of the Dead has some stroke. If you compare Land of the Dead to most of the zombie movies out there, it stands head & shoulders above the crowd, to be sure. I do wish Romero’s Midas Zombie Touch continued with this one, but at least he was able to craft a decent, fun zombie movie. So no, this isn’t Night of the Living Dead or even Dawn of the Dead, but Land of the Dead isn’t as bad as its reputation suggests, so it earns a solid recommendation.

Land of the Dead is presented in 2.35:1 anamorphic widescreen. If you’ve seen the HD-DVD release, then you know what to expect here. This transfer looks great, with clean visuals and the kind of depth we want to see from high definition. You’ll be able to see all the detail on the zombies, even in medium shots, which is impressive. The colors are bright, with no errors to report, while contrast is flawless. In short, this might be the same transfer as before, but that isn’t bad news, as Land of the Dead still looks great and fans should be satisfied.

A new DTS HD 5.1 option offers an upgrade over previous releases, but the step up isn’t enormous. I noticed some added presence in the surrounds, as if things had been opened up a little, which was nice. The action driven scenes sound great, with good punch and depth on showcase. Quieter scenes don’t stand out as much, but still have adequate presence to fall back on. I heard no issues with dialogue either, while the music sounds alive and well. This disc also includes a Spanish language track, as well as subtitles in English, Spanish, and French.

All of the extras have been brought back, but three of the featurettes are only available as part of the U-Control picture in picture mode, so be aware of that. So the material is still available, but it has been repurposed and is only visible as part of that special enhanced mode. As far as the other goodies, Romero is joined on commentary by producer Peter Grunwald and editor Michael Doherty. As a fan of Romero’s resume, I was let down by this session, as even he seems too reserved. I was curious about the experience of a bigger budget and big studio involvement, but Romero never hones in on those issues. So in the end, this one is one you can skip without hesitation. This disc also includes some deleted scenes, a test reel of zombie CGI, some storyboards, and a couple of brief featurettes. 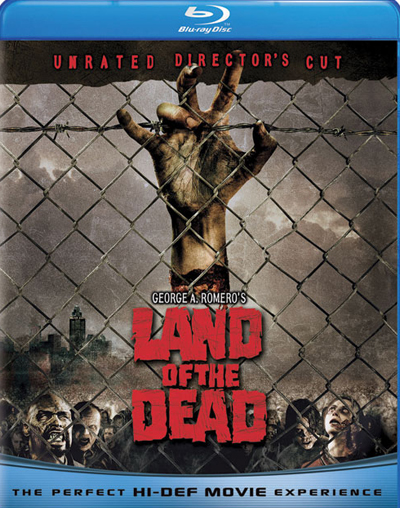