I find it strange that some talented actors can end up in some pretty bad movies. Before I continue, I will say that Like a Boss isn’t nearly as bad as I’d imagined, but it’s been finding the way to the bottom of my “to be reviewed” pile for the better part of two weeks. Time to bite the bullet, though. I’m a fan of the main three stars in this film, but for different reasons and I’ll say that they’re all extremely talented in their own respects. On one hand, we’ve got Rose Byrne who can pull off comedy (Neighbors) and drama (X-Men: First Class), Tiffany Haddish, who’s mainly known for her comedic roles (Keanu) and Salma Hayek, who’s gone down more of the dramatic path (Frida). Put them in one movie and what do you get – well, this.

Mel (Rose Byrne) and her BFF Mia (Tiffany Haddish) have known one another for decades. They’re pushing 40 and while their friends are getting promotions or getting married and having children, Mia and Mel are still roommates. They do, however, own a makeup store which “was built on a foundation of love.” But they’re not exactly the best at accounting and as a result are some $500K in debt. Whoops. Enter cosmetic store icon Claire Luna (Salma Hayek) to the rescue who offers to buy 49% of the store thereby solving Mia and Mel’s problem. But, don’t know you know, the devil wears Prada and we quickly learn that Claire’s intentions aren’t exactly altruistic. Can Mia and Mel get out of this one and will their friendship survive?

Films like this come and go and rarely make an impact on society (or, in this case, the box office). Yes, the three names on the marquee are familiar, but in this instance it appears all for naught. This is one of those films that you can essentially figure out in the first ten minutes (which, in this case, is about 1/8 of the movie) or by the trailer. That said, it does have some funny moments. All three actresses have comedic experience and it does show. The play that Haddish and Bryne have off one another makes for a less excruciating ride. And, let’s face it, even at 50+ Salma Hayek is still something to look at. This is a fun movie if you’re looking for a way to pass some time, though not much of it. It clocks in at 83, count ’em, 83 minutes.

The film revolves around the cosmetics industry, so it’s clear (pun fully intended) that everyone you see on screen will look their best. Clean lines abound. Skin tones are flawless, or at least as flawless as they want them to be and we’re treated to a candy-colored ensemble of wardrobes. The 2.39:1 AVC HD image epitomizes everything that we’d expect about a film that’s new to the format. There’s an abundance of detail in both foreground and background shots. There’s not much else to say, the image is amazing.

It’s odd how most new Paramount titles have a Dolby TrueHD mix while the majority of others have a DTS HD Master Audio. I have to believe there’s some long standing legal thing with Paramount and Dolby. I’m going to investigate. Nevertheless, this isn’t a film that’ll test the limits of your system. Vocals are crisp, but a little on the soft side. I found myself having to turn up the volume a click or two from my normal viewing. Surrounds are used, but sparingly and the remainder of the mix is relegated to the front stage.

There were a few, only a few, moments in this film that got a chuckle out of me. Most of my time was spent looking at Salma Hayek’s ample bosom. And I’m not afraid to admit that. Hey, there’s even a line of dialogue in the film to that effect “My head isn’t little. It’s just that my breasts are humongous.” See? Now I’m absolved of misogyny. 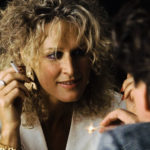 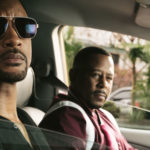