Emma (Mia Wasikowska) is newly married to a doctor named Charles (Henry Lloyd-Hughes). Unfortunately, she grows bored with her married life, feeling there’s a void that needs to be filled. She then turns to men to comfort her. For those unfamiliar, this film is based on the 1857 novel by Gustave Flaubert of the same name. It has had many stage and screen adaptations as well. While I find the plot somewhat intriguing, the film left me cold, unmoved by the events. Admittedly, I’m not a big fan of period pieces such as this. Much like Emma, I was rather bored by what was presented here.

I admire the cinematography here and the costumes and set designs, but I didn’t find myself caring much about the characters. Emma begins an affair with a clerk, Leon Dupuis (Ezra Miller) who clearly has strong feelings for her. She is reluctant to start the affair at first, but obviously, we know she will. The film builds slowly towards its tragic and somewhat abrupt ending. I’ve read some other comments both praising and disliking Wasikowaska’s performance, but for me, she was the highlight. While nothing outstanding, I thought she was a perfectly fine in the role. That still wasn’t enough for me to come on board with the films journey. The pacing is simply too sluggish for me. It doesn’t help that the rest of the performances are rather flat.

The film looks flawless in HD. Period pieces are usually welcome additions to the High Def format and this is no exception. The image is AVC encoded with a 2.39:1 ratio. Detail is evident throughout and the print used shows no artifacts or other issues. All in all, this is a solid transfer that will please fans of the film.

The Dolby TrueHD track also impresses even if there’s nothing overly robust about the track. It works for the film as it should. There’s a nice balance to the whole track. Vocals displayed a nice clarity with no issues to speak of. We get a good sense of the environment on several occasions with background noise adding a nice, but subtle touch. The track satisfies.

Despite a strong lead performance from Mia Wasikowska, there’s little else about this film that impressed me. The pacing is slow and the other performances unremarkable. 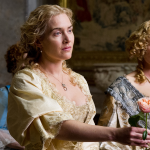