Judy Garland. It’s amazing how recognizable one name is and what we associate that name with. For nearly everyone out there, she will forever be remembered as Dorothy, the girl from Kansas who traveled “somewhere over the rainbow” in “The Wizard of Oz”. Though small in stature, she was only 4’11” tall, she had a voice that many will recognize after only a few notes. To me, her most notable roles were as the aforementioned Dorothy, as Esther Blodgett in “A Star is Born” and as Esther Smith in “Meet Me in St. Louis.” That’s not to say that her film career wasn’t highlighted by other roles, but I believe that these were three of her most famous roles and ones that she’s most easily identifiable with. She was a product of the MGM studio system who decided that Garland would be a star. She (along with many other child actors at the time) was worked up to 20 hours a day, given pills to sleep and then more pills to stay up so she could make more movies. This process eventually evolved into a drug habit for Garland and she ended up accidentally overdosing on sleeping pills in the late 1960’s. With all that aside, though, she had a glorious career, married several times and even produced an Oscar-Winning daughter in Liza Minnelli. What was it about “Meet Me in St. Louis” that made it so special and universally acclaimed?

Family. Family is at the heart of the movie and it’s something that everyone can relate to. Everyone reading this is a part of a family (or will be) at one time in their lives, at least a family of two. Garland plays Esther Smith, the second daughter of four. Esther has fallen for the boy next door, literally, and swoons for him whenever she sees him. This is, of course, the inspiration for the movie’s most intriguing and fun song, “The Trolley Song.” We’ve all heard it: “Clang, clang, clang went the trolley – ding, ding, ding went the bell…” and this is the movie that originated it. Esther feels that John (Tom Drake) doesn’t like her initially, but things soon change (this is a 1940’s musical, after all). The family is shaken up when Mr. Smith (Leon Ames) announces that he has been transferred to a better job in New York City. This would mean that the family would have to uproot itself from their St. Louis roots and miss the now very famous World’s Fair (1904). I hope I’m not giving anything away when I say that they don’t go, but this, like “The Sound of Music” has its roots so firmly rooted in the family that it’s almost required viewing.

Garland originally didn’t want the role as she was 22 at the time (playing a 17 year-old) and felt that she was in line for more adult roles. She did end up doing the movie and indeed fell in love with the director, Vincente Minnelli and was his wife for six years. What set “Meet Me in St. Louis” apart from other movie musicals, aside from the fact that it was one of the earlier big-budget ones, was that the music wasn’t just there for show. The tunes were ingratiated into the dialogue so the music actually seemed to make sense and was part of the story (i.e. “The Trolley Song” actually took place on a trolley, etc.). The movie merited four Oscar nominations and even won one, an honorary Juvenile Award for Margaret O’Brien in her role of Tootie (ironically enough, Garland had won the same award five years earlier). The songs, the performances and just about everything associated with this movie make it a must own. This marked the beginning of what was to become the Golden Age for Hollywood musicals and what a way to start. They don’t get much better than this.

Warner has one of the largest and most expansive catalogs in the entire movie business. They released several of their “Two Disc” editions that really prettied up the look and feel of some of these classic titles and “Meet me in St. Louis” was among them. This title has now made the leap to Blu-ray in a DigiBook format and I’m pleased to say that the movie has never looked better. The original Technicolor experience is nearly replicated here and the full-frame AVC HD image has the colors leaping off the screen. Take a look at the detail in the dresses during some key scenes. Look at the steam coming out of the train during the Trolley Song. There are some minor issues with contrast, but not many. This is, by far, the best the film has ever looked and it’s a few steps above the standard DVD in regards to the overall clarity. A very nice effort by Warner.

Warner has re-mastered the original mono track and given us a DTS HD Master Audio track. That’s a mouthful, for sure but I assure you that the sound is far better than I expected it to be. Songs like “The Trolley Song” and “Have Yourself a Merry Little Christmas” have really never sounded better. The overall dialogue is very rich and clear, only having a few issues. If that wasn’t enough, we also get a music only audio track that’s sure to please even the most demanding fan. “Meet me in St. Louis” won’t blow you away when it comes to this new track, but it’s a far better effort than past editions.

As previously mentioned, this was one of Warner’s “Two Disc” editions from several years ago (2004 if memory serves) and most all of the supplements from that edition have made the leap to this HD edition. We start off with a five minute introduction by Liza Minnelli (for those who don’t know Minnelli is Judy Garland’s daughter) as she remembers her mother and father (director Vincente Minnelli) and professes that this is her favorite film. It’s a bit hard to take Ms. Minnelli seriously as she’s been in the news with her personal life lately, but it’s nice to have and we get a little history of the movie (which is repeated about five times once you take in all of the supplements). There’s a commentary track with Judy Garland biographer John Fricke, Margret O’Brien (Tudy in the movie), screenwriter Irving Brecher, songwriter Hugh Martin (who is also featured in a few of the supplements) and Barbara Freed-Saltzman (daughter of Arthur Freed). Ok, that’s a mouthful! The track is a bit disjointed and even quiet at times, which is odd considering the amount of people on it. Still, they all clearly still have very fond feelings for the movie and it’s no surprise that they just sit back and watch some of the more famous scenes. We don’t get a whole lot of new information here, just some tidbits here and there. Still, it’s a pretty-good track and I think fans will like having the addition of it.

Moving on, we find “Meet Me in St. Louis: The Making of an American Classic.” This is at least a few years old as it’s narrated by Roddy McDowall, who died in 1998. The interviews seem to be done in the mid to late 80’s; but this is still an entertaining documentary nonetheless. We hear from Vincente Minnelli (in a 1973 interview) and other members of the cast reflecting on how popular and enjoyable the movie has become. An Emmy-Award winning television special titled “Hollywood: The Dream Factory” is also included as the next feature. This doesn’t really have so much to do with the movie, but rather the rise of MGM studios in general. Narrated by Dick Cavett, this certainly has the “retro” look and feel to it (though I doubt it’s retro as it was really made in the early 70’s) and we get a good, albeit brief, history of the once mega-powerful studio. A 1996 Turner Classic Movies special called “Becoming Attractions” focuses on Judy Garland. Essentially, they show trailers of all of her more popular movies and add a bit of brief commentary to them. This was an ongoing series and something I rather enjoyed, but I haven’t seen any new episodes lately. Still, this is the place to get your list of “essential” Judy Garland movies. The entire “Meet Me in St. Louis” television pilot is shown with Shelly Fabares (best-known from TV’s “Coach”) and Celeste Holm (‘All About Eve”) as the leads. There are two very old shorts, one from 1930 featuring an eight year old Judy Garland and then a 1941 musical short of “Skip to My Lou.” Both are fun for campy value, but don’t really add a lot to the disc. There is a stills gallery and some audio-only features with the original Lux Radio Theater Broadcast from Dec. 2, 1946 and an outtake of “Boys and Girls Like You and Me”, which was a musical number by Rogers and Hammerstein that was dropped from the final cut of the movie. A few of the Vincente Minnelli trailers have been cut, who knows why, and as mentioned there’s a audio only soundtrack as well as a CD sampler included. 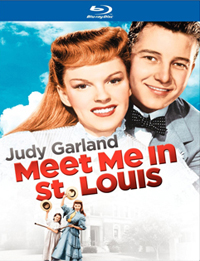