Reuniting Julia Roberts and George Clooney for the first time since 2004’s Ocean’s Twelve, Money Monster was mostly overshadowed when it hit theaters. Jodie Foster is the director, and if taken with moderate expectations, the film can be quite entertaining and suspenseful at times. By no means is it a “Must See” or even a great film, but it moves by at a quick pace and maintains interest throughout. Though Roberts and Clooney do share scenes together, the central conflict of the film keeps them from being on screen at the same time through much of it. We see Roberts speaking to Clooney via a headpiece throughout the majority of the film’s running time.

Clooney plays Lee Gates, he has his own cable show about investments. Think something like Mad Money on TV and you might get a general idea what his show is like. Julia Roberts plays Patty Fenn, she’s the producer of the show and plans to move to another network soon. She doesn’t fill Lee in on this, however. Clooney obviously gets the flashier of the roles here as Roberts is shown in something of a rough manner. A nice woman who looks like she could use some rest. One day during his live broadcast, a mysterious man walks onto the set and holds Gates at gunpoint. The man is Kyle Budwell (Jack O’Connell). We learn that he lost a large sum of money because of Lee’s financial advice and now he’s demanding some answers. We see that Kyle brought explosives with him and a gun. He puts the explosive vest on Lee and holds his finger on the detonator as leverage over Lee and the rest of the crew. It doesn’t take long for the cops to get involved and we follow this journey over the course of the film.

There were a few nice surprises throughout the film, and despite it being confined to one setting through the majority, it never felt boring. Granted, there are a few weak spots here and there, but overall, Foster keeps things moving along nicely. The performances are also strong as Clooney plays a more vulnerable role than usual. I also like that the film doesn’t get overly preachy of heavy handed with its message. For the most part, it keeps the politics out of the picture.

We get a 2.39:1 AVC encoded transfer that remains solid and consistent throughout. It’s not a particularly flashy film, but it’s presented just fine. Details were strong throughout and the print used showed no major issues. Background shots when the action moves onto the street are strong too. Fans should be pleased with the results here.

As we move toward audio, the results are about as expected. I was pleased with the DTS HD track, but don’t expect more than you should. It’s very fitting for this type of film, but not much else. Vocals are strong, there’s nice range to several scenes as we hear plenty of background banter as well.

While far from a great film and one that lacks a lot of replay value, Money Monster still provides enough entertainment value to make it worth renting. The nice pace and acting help keep things interesting here as well. 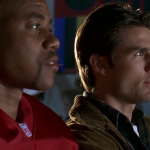