It’s happened before and I’d bet my left arm it’ll happen again. What am I talking about, you might ask? Movie stars falling in love when they work on a movie together. It happens in television and of course, the silver screen. Now sometimes this actually works and the two stars live a long and happy life together. Take, for instance, Paul Newman and Joanne Woodward. Then you have couples like Elizabeth Taylor and Richard Burton. One of the more recent examples of this phenomenon is, of course, Brad Pitt and Angelina Jolie. Both Pitt and Jolie had done the rounds in Hollywood; Pitt had been dating Gwyneth Paltrow and was married to Jennifer Aniston for a few years. Jolie, conversely, was married to Billy Bob Thornton (and I never did understand the whole vial of blood around the neck thing) until they separated. I have no idea if Brad Pitt and Angelina Jolie were the least bit interested in each other before this movie, I’d have to assume so (I mean who wouldn’t be), but their on-screen chemistry is certainly the thing that makes “Mr. and Mrs. Smith” work. And does it ever.

John and Jane Smith (Brad Pitt and Angelina Jolie, respectively) are a seemingly normal married couple. They met while overseas and have been happily married for six years. But, unbeknownst to each other, they’re both spies leading double lives. The two are more assassins for hire and have somehow managed to keep their covers secret from each other until now. You see, they have both been assigned to eliminate the same target, Benjamin Danz (Adam Brody) and it’s not long after a first failed attempt that the two lovers finally figure out who they really are. At first, their goals seem fairly easy John must kill Jane so he can complete the mission and vice-versa. Of course, it’s never that easy and all hell literally breaks loose. Some comic relief is thrown in with the addition of Eddie (Vince Vaughn), John’s friend and cohort.

If it’s on-screen looks that floats your boat, odds are that Mr. and Mrs. Smith will have more than enough eye candy (whichever way you swing) for you. That aside, the story isn’t all too great but as I mentioned before, it’s the on screen chemistry that really makes things work between the two. Now I’ve become just as sick as the next person when it comes to Pitt and Jolie, I really don’t care how many children they adopt or what part of the world they’re trying to save next and I don’t really care what color of dress Angelina wears to a red carpet affair. To think that this movie is partially responsible for all of the tabloid warfare going on could demean it but I have to admit that Mr. and Mrs. Smith is one of my very guilty pleasures. Doug Liman, who directed The Bourne Identity, Swingers and Go is in top form here and if you can check your mind at the door for a few hours you’ll have a great time.

When the movie first came out on standard DVD, I remember being very impressed with the way it looked visually. That, of course, was about six months before I witnessed HD DVD and Blu-ray on my same television. The 2.35:1 AVC HD transfer looks simply amazing. Fox has given this release some TLC and it shows. Granted, the movie is only a few years old so it’s pretty much a given that it’d look good to begin with, but I noticed little things in the background that I didn’t notice on the standard DVD. The image is very clean and crisp, leaving almost no room for error. Colors seem very bright as well. A scene that stands out is when Brad Pitt’s character is wearing yellow sunglasses; you can see his eyes through them whereas on the standard DVD, it was more of a reflection. At any rate, Fox has set the bar high here and that’s a good thing, at the very worst we’ve now got the best-looking of this movie available.

Fox is really high on the DTS master audio and I’m glad. I’ve done some side by side comparisons between some of the HD formats and I have to say that out of them all (well, “all” being Dolby Digital Plus, Dolby TrueHD, PCM Uncompressed and DTS Master Audio) that I think DTS master audio sounds the best to me. This may vary between movie and system, of course but this mix seems to be consistently the strongest. Dialogue is very natural and what stands out the most seems to be the surrounds. I was really impressed with the way things sounded not coming towards me, but going “past” me. Bullets whiz by, explosions seem to literally be happening in my living room and darn it if I didn’t turn my head a few times only to be fooled by the surround sound again. Those wanting a dynamic audio experience will no doubt find it with this movie.

Mr. & Mrs. Smith came out in a few different versions in standard DVD, the regular special edition and then an unrated version. This seems to be the rated version and while I’d have liked to have the unrated version, you can’t have it all (though at $40 a pop, you should). We get the same three audio commentary tracks that were found on the standard DVD. The first is with director Doug Liman and Simon Kinberg who offer up a very chatty track. The next is with producers Akiva Goldsman and Lucas Foster, which is bit duller and the last is with editor Michael Tronick, production designer Jeff Mann, and FX supervisor Kevin Elam. We then get a “Making of…” featurette and a trio of deleted scenes as well as a theatrical trailer. 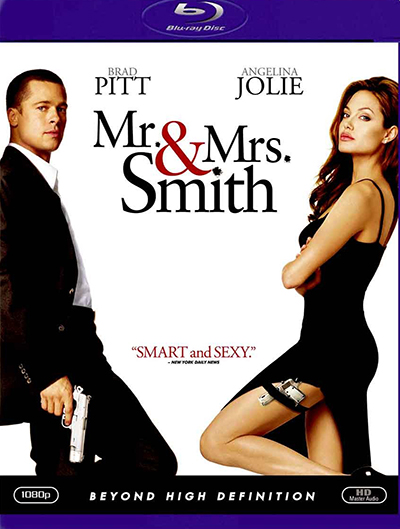