When you sit down and actually think about it, and I know we all do this often, how much do we really know about the oceans and seas of the world? And the truth is that we don’t. We probably know more about outer space than what’s on our own planet. Over 75% of our planet is covered by water and there’s a lot going on just under the surface. There’s a painting or illustration of some sort that I saw a while back that really changed my outlook on the ocean. It’s a cross section in which we can see the land on the top of the print and also below the surface of the water. Just below we see all sorts of sea life, fish, whales and the like. And this got me to thinking that there’s so much going on under the sea that we simply don’t know anything about. And as mammals need oxygen to breathe, our resources to discover the ins and outs of the world’s oceans will always be at a slower pace than our studies on land. That said, I also remember seeing a special on television saying that the best way we can learn about the ocean is through the use of high definition video and, wouldn’t you know it, “Oceans” utilizes just that.

“Oceans”, like other documentaries of the lie (“Life” and “Planet Earth”) doesn’t cover too much new ground with what it’s trying to do. It’s part of Disney’s new “DIsneyNature” line of films that will focus on every living thing on earth. “Oceans” takes us through several different chapters of life in the water. The narrator (Pierce Brosnan ? for the English version) guides us through what’s going on screen and as we go from schools of tuna to leopard seals in the Antartic, we see what they see. It’s amazing to think, really, how massive some of these creatures are. There’s a scene in which we see a scuba diver next to a blue whale and the sheer scale is mind-blowing. We see schools of fish, seals, dolphins and pretty much everything in between. I read where it took them over four years to get all of this footage and compile it for this movie and there’s even a thread at the IMDB that asks if some of this footage was CGI. I’d have to say that that accusation is false as it would completely ruin the point of what they were trying to accomplish here. The bottom line is that “Oceans” is pretty amazing to watch. It gives you a glimpse into a world that most of us won’t have the opportunity to see firsthand, but with this Blu-ray, it’s like you could reach out there and touch it.

Having seen some of the other films in this genre like “Life” and “Planet Earth”, my expectations were pretty high. And I have to say that the 2.40:1 AVC HD transfer didn’t disappoint as some of these sequences are so breathtakingly beautiful that it’s like watching a living work of art. As I’d thought, a majority of the film is predicated by the darker, bluish hues associated with the ocean. But there are plenty of spots in which the colors leap off the screen. Take, for instance, the little crabs crawling across the ocean floor or the silky look of one of the most unique octopus’ I’ve ever seen. The detail is simply amazing and it makes a school of fish look like one living organism. Have you ever seen a bird dive full force into the water in search of a meal? No? Well, these things look more like missles going into the ocean than birds. Suffice it to say that “Oceans” delivers when it comes to the presentation, as expected.

The DTS HD Master Audio track actually somewhat surprised me. I wouldn’t think that looking at fish or whales would be that sonically pleasing, but I’d be wrong. There are several instances in which the LFE take over and the splashing of the waves, the different elements of nature and the soundtrack take control. Pierce Brosnan’s calming voice helps guide us through the film though I couldn’t help but think back to an episode of “The Simpson’s” in which he played a “HAL” type of character that was obsessed with Marge. At any rate, the mix here is used and used very well so I don’t think that viewers will be disappointed in the least.

There aren’t too many supplements to note, mainly an extended promo for the DisneyNature series of films and a music video with Disney staples The Jonas Brothers and cohort Demi Lovato. The Blu-ray version also has a “Living Menu” feature that can be played with or without this option. With it enabled, you can click at several key points in the movie to see some more on that particular section. It also has the time, date and weather for your particular location (several LionsGate Blu-ray’s have this feature as well). There’s also a standard DVD included as well. 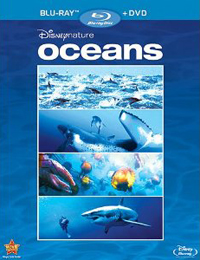