Muraki (Ryo Ikebe) has been in prison on murder charges, but he has just finished his sentence is now a free man. He seeks to return to the world of crime he left behind, but times have changed since he was first imprisoned. Muraki was part of a high level yakuza organization, for whom he performed whatever tasks he was assigned. He would steal, intimidate, and even kill for his bosses, often with no remorse. In fact, he even liked the role of hired assassin, even though it landed him in prison for some time. When he is freed, he reports his old bosses, only to learn that his clan has joined forces with a former enemy’s clan, in order to fend off outside attacks. This shakes Muraki up at first, but he resigns himself to his loyalties to his own clan, so he returns back to work for his former bosses. He soon begins to spend a lot of time in a gambling hall, where he can escape from the altered world. In this hall he meets Saeko (Mariko Kaga), a mysterious young woman who loves to watch all the high stakes action. She is obsessed with the dangerous side of the lifestyle, as well as the men who engage within it. Muraki is instantly drawn to her, but the combination of dangerous elements around them seem to doom their love. Can Muraki and Saeko somehow secure a future together, even as Muraki prepares to carry out another murder?

I’ve seen some wild 60s crime films out of Japan, so I expected “Pale Flower” to be another insane, visually dynamic picture. As it turns out, “Pale Flower” is not that kind of movie, but there is still style to burn. Masahiro Shinoda directs here and infuses the film with low key, but effective style that is a pleasure to watch. So don’t expect unusual camera angles or other in your face visual style choices, but Shinoda’s direction is well crafted and yields excellent visual presence. “Pale Flower” is also not a typical yakuza picture, as the usual themes and plot elements are absent, though of course, this is a film centered on underworld criminals. I was surprised by the lack of violence, most of which is dealt with off screen or just mentioned, though to be honest, the absence of violence is not a hindrance in “Pale Flower”. The pace is slower and more reserved, with a lot of focus on character development. This might not sit well with those seeking a wild, over the top yakuza movie, but I think genre fans should be satisfied. I had my expectations turned upside-down with “Pale Flower” myself, but I wasn’t disappointed in the least. Home If you’re a fan of 60s Japanese cinema, then “Pale Flower” is more than recommended.

Admittedly, before this Blu-ray arrived, I’d never seen the movie. But I always have loved the way that black and white movies look on an HDTV. I don’t know what it is, but the picture just seems more simplistic and, well, beautiful than that of films with color. “Pale Flower” hits Blu-ray in a 2.35:1 AVC HD transfer that looks just as good as I thought it would. Contrast is strong and bold, black levels are tight and focused with little or no compression issues. Shadows are consistent with deep blacks. Given the age of the film (over 45 years old), my expectations were a bit low but Criterion gave this film a brand new HD restoration. Kudos to Criterion and their ongoing efforts to make films look their best. A top notch effort here, visually-speaking.

While the picture looks great, there’s only so much that a mono track can accomplish (even an uncompressed one found on this Blu-ray). That said, I was fairly impressed with the way this sounded. Movies of the 60’s aren’t really known for their sound and while somewhat spacious, this mono track is a bit limited. Yes, I realize those last two sentences essentially contradict one another, but suffice it to say that “Pale Flower” sounds just about as good as it possibly can. Another great effort here.

The previous offering of this film on DVD didn’t have much in the supplemental department. It was released by Home Vision Entertainment (an affiliate of Criterion). Criterion is great about unearthing new material and that’s the case here as well. In addition to the new transfer and uncompressed mono mix, we get a new video interview with director Masahiro Shinoda as well as a select scene commentary by Peter Grilli, a producer for “Music for the Movies.” While I wished that there was a little more information here, it’s a good track with some selected tidbits of information. We also get the original trailer as well as new subtitles that supposedly “improves” the translation. Having never seen the film before, I don’t really have a basis for comparison so I’ll take their word for it. Lastly, we get a new essay by critic Chuck Stephens. 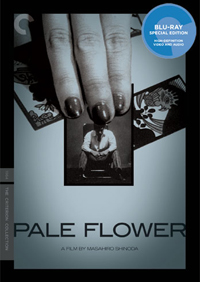