The original Pitch Perfect became a surprise hit when it opened in theaters a few years ago. It also earned much recognition for the hit song Cups performed by star Anna Kendrick. It wasn’t until it left theaters that I saw the original film at home, and was pleasantly surprised by how much I enjoyed it. While it was a modest hit at the Box Office, it also received much recognition on the home video format. I felt and still feel perfectly satisfied with the original film. It’s a solid film with a beginning, middle and an end. In other words: I was never really craving a sequel. Still, money talks in Hollywood, and the folks at Universal (who’ve been enjoying quite a great year with several hits) saw another money maker. All of the original cast returns for this sequel, and while it is still enjoyable in its own way, it still fails to live up to the charm of the original.

In order to regain their status and right to perform, the Barden Bellas decide to enter an international competition that no American Group has ever won. The opening moments of the film show the disaster they have performing when Fat Amy (Rebel Wilson) has a disastrous malfunction. There are a few new faces here, but most notably is Freshman Emily Junk (Hailee Steinfeld) who wants desperately to be a part of the Bellas. Meanwhile, Beca (Anna Kendrick) is busy pursuing her music career. There’s an entire subplot with her as she meets with a music producer and we follow this arc throughout the film. There’s also a subplot where the girls all go to a camp for a retreat to try and bond more and work through their personal issues. Lastly, much more screen time is given to the Fat Amy character. She worked fine in the first film in small doses, but it becomes a bit much here. It’s clear that the filmmakers saw that there was a positive response to this character that they decided to focus more on her. I appreciate Rebel Wilson, but as mentioned, she’s best in small doses. Her angle feels more like filler to simply pad out the running time.

The biggest issue with this outing is formula starting to wear a little thin. The musical numbers aren’t as fun or catchy as the first film, and there’s a “Been there, done that” feeling to this film. You’d never hear me call the first film outstanding, but I don’t think it was ever meant to be. It was just a good time that didn’t overstay its welcome. I don’t mean to come down too hard on this film, but it’ll always be the original film that I return to on repeat viewings than this one. Still, the characters are all likeable enough that the time at least flies by rather quickly. This, despite a few moments that lag in the middle. Elizabeth Banks (who also stars in the film) takes over directing duties here, but I don’t think it’s entirely her fault that the sequel doesn’t work as well as the original. It lies more with the script. When the inevitable third chapter rolls around, I just hope it offers something a bit more fresh than this sequel.

Universal has set the bar pretty high with their new to Blu-ray releases and Pitch Perfect 2 is no exception. The 1.85:1 AVC HD image practically leaps off the screen with so much color, detail and a near 3D effect it’s like looking through a window. The film showcases a variety of locations, from the pitch black of the stage to the woods in the “boot camp” sequence. Flesh tones vary depending on the actors involved, but all look amazing with contrast and deep, dark blacks making for an amazing picture perfect image. This looks outstanding.

As we’d expect with a movie based on music, the DTS HD Master Audio soundtrack certainly makes ample use of each and every speaker in your setup. From the little whirrs and “beat box” sounds of the Riff Off to the A Capella songs to the staged performances, it’s pretty much a showcase in HD sound. Vocals are solid and sharp, surrounds are used amply and the front stage seems to keep things in balance. Viewers certainly will not be disappointed in how this sounds.

As one of the more popular films of the year, Universal has wisely loaded down this two disc set with a plethora of supplements. Let’s take a peek, shall we?

While it has its moments, and is admittedly hard to entirely dislike, Pitch Perfect 2 just feels unnecessary and a bit lazy. The musical numbers seem bland and the story lags too much in the middle. The cast of colorful characters help keep it afloat, but it’ll always be the original film that I return to on repeat viewings. Recommended as a rental. 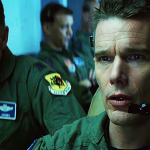 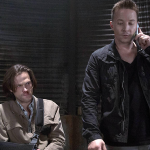